Share All sharing options for: Game Day: Louisville Vs. Kentucky

About The Governor's Cup 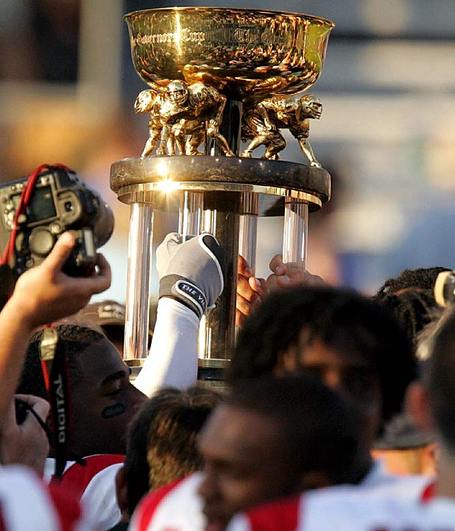 The Governor’s Cup was created in 1994 as the trophy for the winner of the Kentucky-Louisville game.

Donated by The Kroger Company at a cost of $23,000, the Governor’s Cup stands 33 inches tall and weighs 110 pounds. The trophy’s base and upright columns are hand-milled black marble. The glass components are optic-grade crystal. All metal parts are 23-karat, gold-plated brass. The cup itself is made of pewter with a 23-karat gold-plated finish.

The cup was designed by Kendall Costner and sculpted by James Corcoran of Bruce Fox, Inc. The Kroger Company also is involved in sup- porting academic pursuits at the schools. Kroger is donating $10,000 to each school for each year the game is played. Kroger’s donations now total $360,000 - $180,000 to each school.

It currently resides in Louisville. 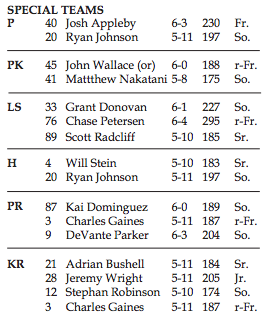 Just seeing the Louisville and Kentucky logos next to one another is enough to elicit goosebumps the size of the Colgate clock. It's a very special holiday in the Bluegrass State that we only get to celebrate once a year. Add in the fact that this is the beginning of what is easily the most anticipated Cardinal football season in five years and, well, I don't think I need to connect the dots.

I feel like you almost have to go red for games against Kentucky. My hope is that the football and basketball teams both go undefeated this season and I wind up wearing this same outfit in Atlanta on the first Monday in April.

If you're gonna dream...

Joker knows how important this is both for the morale of the program and for his job security. Nothing will be held back.

The heart of the legacy begins.

--The team that has rushed for more yards has won the last 16 meetings between Louisville and Kentucky.

--In 10 of the last 12 years, the leading rusher on the victorious team has outrushed the entire losing squad. The exceptions are when Vic Anderson was the game's leading rusher in 2009, and when Bilal Powell got loose for 153 yards in 2010.

--The team that has scored first has gone on to win ten of the last 11 times these two have met. The lone exception is last season's game, when Louisville overcame an early 3-0 deficit to win 24-17.

--The team that has produced the least turnovers has won 11 of the last 13 meetings in this series.

--The favorite is just 10-8 straight up in the modern era of the series.

--Kentucky returns 11 starters from a squad that went 5-7 last season. La'Rod King, the Wildcats' top wide receiver, caught 40 passes for 598 yards and seven touchdowns, while CoShik Williams is the top returning rusher with 118 attempts for 486 yards and three touchdowns. Safety Martavius Neloms, the team's top returning tackler, is back to lead the defense.
--Highlighted by sophomore quarterback Teddy Bridgewater, Louisville returns 18 starters from last year's 7-6 Big East co-championship team. Ten of those starters are on the defensive side of the ball.
--Louisville is 3-4 all-time against UK at Papa John's Cardinal Stadium, and have dropped the last two home contests against Kentucky. Louisville's last home win in the series was a 59-28 victory in 2006.

--"I've been thinking about (Louisville) this whole year. We can't let that happen again. They are not going to beat us again. I'm not going to let that happen next year. What happened last year should not have happened at all. It left a real bad taste in my mouth. I'm mad about it." --UK OL Larry Warford

--"We haven't beat UK here since 2006 and they've won four of the last five overall. We're going to keep being the hunter and keep playing like we're always the underdog." --Charlie Strong

--"You'd like to build a culture at Louisville where every year people (believe) you should go win the conference and go get in the national picture. You'd like to think this is a step that we're beginning to take." --Charlie Strong

-"Obviously, you want to start your season off with a win, be 1-0 right off the bat, but the fact that it's against our in-state rival, it's always a huge game for us. ... It's just a huge game in general. You want to start the season on the right note." --UK C Matt Smith

--"I absolutely hate Louisville. There's no other word I can use but hate. I can't stand them." --UK WR LaRod King

--Neither one of us have seen each other on film. It's going to come down to who's going to make the adjustments the fastest. I'm sure they've been working on some things this off-season, a little bit different things. But we have, too. We both have to find out who can adjust the fastest." --Joker Phillips

--"I'd love to hit Teddy [Bridgewater). "Let him know how physical it's going to be." --UK LB Avery Williamson

--"The only thing I can compare it to is the excitement and the fire the Kentucky fans had when we went to their place my first year starting in 2009, except it was the other way around. It was a tough environment for an 18-year-old kid in his first game starting in a big-time environment. Now we have such great fans in Louisville. They're waiting for an opportunity like this, for a potential season like this. We've always had support but now we've given them something to be excited about. It's definitely a totally different feel, especially for me being one of the older guys. There's a lot of excitement, but you always have that guy on your shoulder telling you to just focus in and play the game and not get too caught up in all that other stuff." --Mario Benavides

-"We've only scratched the surface. We want to go out and prove ourselves. Show everybody we mean business." --Alex Kupper

--"They're another team on the schedule. Nothing more than that." --UK DT Mister Cobble

--"For Louisville, they don't have to go through the wear and tear that we go through week to week. So this is a big game for them because it's a non-conference game and it'll be competitive for them. You know, they'll end the season whatever and a couple losses. They just don't play the schedule we play, so it's a big game for them for that reason. It's a quality, non-conference opponent." --UK QB Morgan Newton

--"(On his young players) When the lights come on, people start cheering and you hear `My Old Kentucky Home,' you don't know what's going to happen. They might start crying. They might needs some Pampers. I don't know what they are going to do." --Vance Bedford

--"UK beats Louisville 35-0. Sept. 2 that will be the score. We will shock the state of Kentucky." --UK running back Justin Taylor

--"You have to play no matter the conditions. If it is raining, it will be more of a ground-and-pound type of game. We will just have to stop the run or whatever their plan is. If they want to pound the ball (running), we just have to pound back. We have to stop the run any way, especially being a SEC team and playing teams that love to run. " --UK S Martavius Neloms

--"Card Nation, Sept. 2 we having blueberries for dessert." --Andrew Johnson

--"These crabs really think they're going to win. Can't be serious." --Adrian Bushell

--"Expectations are very high right now. We're a preseason ranked football team, but we haven't talked about it. I don't even talk to our players about it because I want them to understand that you have to work. It doesn't matter where you start, it's going to be about where we finish. That's why we have to finish every play and finish everything we do." --Charlie Strong

--"Openers scare you to death, I don't care who you're playing against." --UK defensive coordinator Rick Minter

---"The thing that is special about Teddy is his character. He puts everybody else ahead of himself. He exemplifies the servant leadership you need." --Shawn Watson

Regardless of the weather, I think this ends up being a game where Kentucky is never out of striking distance but where Louisville still always feels to be in control. Expect some standard game one mistakes, but when the nerves get settled and it comes down to just playing football, U of L's superiority will shine through.

Still, the most comforting fact we have to rest on is that Strong and company won't let these guys be anything other than ready to play as if their lives depended on it when it's time to take the field. Everyone wearing red (or black) knows exactly how important this game is for the fans, the program and for the season ahead. Having to watch an unprepared, unmotivated Cardinal team is not a legitimate concern.