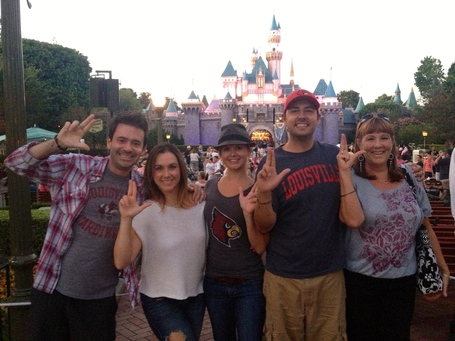 Los Angeles residents Adam Spriggs, Ryan P. Hall and friends claim they literally raced straight to Disneyland after the win over UK to snap this picture. I haven't even figuratively raced anywhere in years, so needless to say I'm impressed.

Off to the cupboard with you now, Joker.

What are we talking about?

We're going down to play football it's not a vacation or nothing like that," Bridgewater said, who added, "When this is your profession, this is your job you have to make some sacrifices so if I have to not see my family I'm willing to not see them."

Center Mario Benavides said it's not an act with Bridgewater either:

"He's one of those kids where you're not going to walk around campus and kids say, ‘hey I saw Teddy today.' Half the people don't even know what he looks like and he's not the type of kid who looks for attention. The only time I see Teddy is at practice or in meetings and every once in a while when guys hang out. He keeps to himself. I haven't talked to him about it, but you can tell Teddy has a very clear vision of where he wants to go in life and what he wants to do I don't think he'll let anything else get in his way."

The Louisville men's soccer team gave easily its best performance of the season last night when they blasted visiting Ohio State, 4-0. Marlon Hairston, Will Vitalis, Zach Foxhoven and Greg Cochrane found the back of the net for the Cards.

Omaha power forward Akoy Agau was on campus for a visit last weekend and says that U of L and Georgetown are currently tied atop the race to land his services.

The Courier-Journal: You've been saying since the summer that Georgetown is No. 1 for you. Is that still the case, or has anything changed?

The Courier-Journal: OK, so you don't necessarily have a leader now, or yes, or what?

Akoy Agau: I'm really not sure. I'm kind of really liking both, so I don't really know until I find something to set them apart, I guess.

The Courier-Journal: Did Louisville make up ground on Georgetown at all this weekend?

Akoy Agau: I would definitely say so.

The Courier-Journal: Would you say those guys are your co-favorites now, or anything like?

Agau will apparently be paid an in-house visit by Pitino and company today, which is a pretty clear indication of just how much this staff wants him.

Check all of Steve Jones' extensive Q&A with Agau, which includes the big man listing DePaul as an additional school he has interest in. At least we know of he comes here he won't have a hard time fitting in from a comedic aspect.

So apparently this ran in the Courier-Journal yesterday: 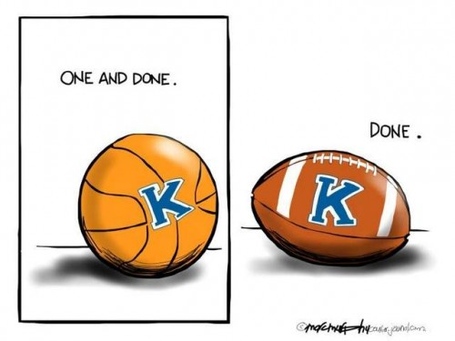 A decade ago this would have been morning coffee conversation all over the Commonwealth. Yesterday, it didn't go viral until Mark Ennis tweeted about it around 6 p.m.

Somewhat unrelated, but a while back I heard someone make the joke that "one and done" is the worst possible theme for a 1-year-old's birthday party, and now it's all I can think about whenever I hear the phrase.

There were plenty of rumors floating around Tuesday that Trinity defensive end Jason Hatcher had decommitted from USC. While that isn't true, it is true that he plans on taking official visits to other schools.

Louisville's far from out of this.

Both FIU and Louisville are very aware of what happened between the two teams last year.

"It proved a couple of things: That our program was getting better and better, (and) that we could compete on bigger stages," FIU coach Mario Cristobal said. "That was one thing we put away last year once it was over with. But, definitely a big moment in our history."

You knew that from the way FIU players and coaches bounded, hugged and danced their way off the field in northern Kentucky. Or the way postgame interviews streamed out in a gasped euphoria.

This week isn't the same for Louisville. Not only did it lose at home to FIU, but its roster includes a busload of players from South Florida.

A happy birthday to Louisville's current leading rusher, Senorise Perry. I can only imagine that big plays will be made all throughout the course of the day.

Again, this is what happens, Charlie. No one is EVER as happy as they were and they'll all tell you the same thing.

An update on the UK bros assaulting the UK non-bro which includes the nugget that two people have been arrested for their role in the melee.

Five-star shooting guard Rashad Vaughn (2014) will be paid visits by both Louisville and Kentucky on Friday. 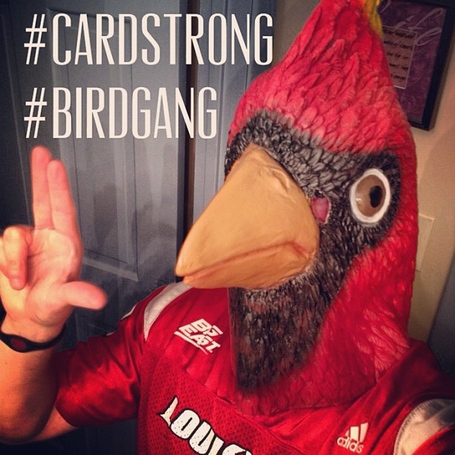 Congrats to the U of L women's golf team, which captured the Cardinal Cup tournament title for the first time since 2009.

Magic number for Louisville: Minus-4: The Cardinals have been outscored 34-30 by their opponents in the second half this season. In the first halves of three games, Louisville has scored 76 points combined while allowing only 21.

Magic number for Florida International: 5. The Golden Panthers will have to find a way to rattle Bridgewater. Last season, FIU recorded five sacks against Louisville in the victory. Bridgewater sat for the majority of the game behind Will Stein, who went 30 of 43 for 349 yards.

The game comes down to: The Golden Panthers' secondary. Bridgewater will put points on the board, the question is how many. If FIU struggled to stop Duke, Akron and UCF through the air, it figures to have even more problems against the Cardinals' vaunted passing attack.

The 2013 Derby and Oaks logos have been unveiled. Neither features Gorgui Dieng prominently as hoped.

Less than a month after being cut by the team, Deion Branch is headed back to New England.

Louisville has never known a fashion icon like Russ Smith. 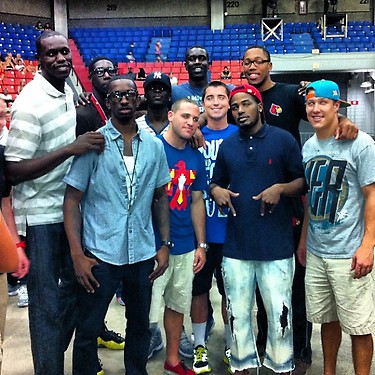 Northern Iowa's leading scorer will be suspended for the first three games of the season, which means he'll be back just in time for the Panthers' game against Louisville in the Battle 4 Atlantis.

Northern Iowa actually could benefit from the three-game suspension to leading scorer Anthony James. The Panthers start the season with three winnable games at home -- against Wartburg, Toledo and North Dakota -- before opening up the Battle 4 Atlantis in the Bahamas against Final Four favorite Louisville. UNI coach Ben Jacobson said junior Matt Morrison, sophomore Max Martino and redshirt freshman Matt Bohannon will take the minutes vacated by the senior James. So by the time the Panthers get to the Bahamas, they should be even more experienced and with quality depth. No one would expect Northern Iowa to beat Louisville, but if the team is deeper and more prepared off the bench, games two (Missouri or Stanford) and three (Duke, Memphis, Minnesota or Virginia Commonwealth) in the tournament might be more manageable.

The new BCS system could have as many as four non-playoff bowls, which would obviously be good news for Louisville.

And finally, star FIU running back Kedrick Rhodes missed a second straight day of practice because of a right ankle injury and will reportedly be a game-time decision on Saturday.