How Former Cards Fared In The NFL: Week 2

Share All sharing options for: How Former Cards Fared In The NFL: Week 2

Carried nine times for a team-high 33 yards as the Jets lost to the Steelers 27-10. 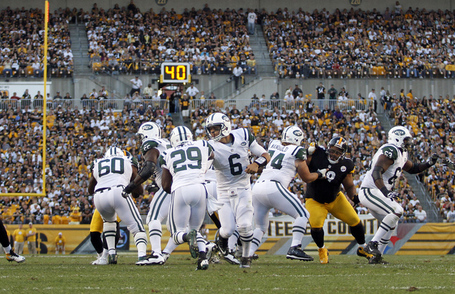 Drilled four extra points and both of his field goal attempts, including a 48-yarder.

Made two solo tackles and one assisted tackle as the Broncos fell to Atlanta.

Started at right tackle for the Seahawks in their 27-7 win over Dallas.

Started at center for the Bills in their 35-17 victory over Kansas City. Made some postgame headlines by speaking out about the dirty play of Chiefs linebacker Tamba Hali.

Played but did not record a catch in Carolina's 35-27 win over New Orleans.

Made one solo tackle and two assisted in Pittsburgh's 27-10 win over the Jets.

Missed New Orleans' 35-27 loss to Carolina because of a thigh injury.

Made three solo tackles, one assisted tackle and defended a pass in Arizona's 20-18 win over New England.

Missed Seattle's 27-7 win over Dallas because of a hamstring injury. Was misidentified in an AP photo attached to many game stories.

Dressed but did not start for the Titans in their loss to San Diego.