Share All sharing options for: The Teddy Bridgewater Heisman Buzz Has Begun

When tossed around in September, the term "Heisman Buzz" is generally attached to a player who deserves more attention than he's receiving nationally, not necessarily someone with a legitimate shot at winning the trophy.

National perception and a lack of necessary "showcase games" mean that it would likely take an absolute perfect storm for Teddy Bridgewater to claim sport's most coveted individual trophy in 2012. Still, we are just three games into his sophomore season and Bridgewater is already receiving some serious support as a candidate from a host of national names.

Anybody talking about Teddy Bridgewater for Heisman?

Country, I would like to introduce u to Teddy Bridgewater. Teddy, meet the country. This QB is special and has some weapons. @espn_bigeast

The buzz has also made its way to the world of television, where both ESPN's Mike Bellotti and Fox's Eddie George have recently declared on-air that Bridgewater is one of their top early candidates in the Heisman race.

Don't think U of L hasn't taken notice of this. Check out the university-produced graphic that has been making its way around the Internet today. 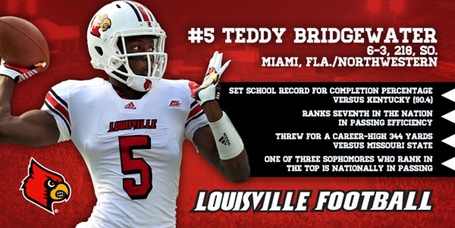 Again, it would take just about everything going right for Teddy - who, once again, is only a sophomore - to have a legitimate shot at being a finalist for the award. But if Louisville keeps winning and Bridgewater continues to put up numbers comparable to the ones he has through three weeks, well, then we'll likely be venturing into uncharted territory come late October.