Stepping Stone to Infamy: The Louisville Coaching Job In the CFB Landscape

Share All sharing options for: Stepping Stone to Infamy: The Louisville Coaching Job In the CFB Landscape

It is almost pathological at this point. As soon as a Louisville football coach does well, we start to get worried about some bigger school coming in and stealing him. And that makes sense, right? Louisville is just a stepping stone job, everyone knows this. A perfect place for an up-and-coming coach to prove he can win, enjoy our low cost of living, light traffic and the friendly folks around town and then get called up to the big leagues. Bigger and better things await, right?

Maybe it is just a coincidence, but it seems like coaches after they leave our fair city more often find themselves failing or becoming laughingstocks than keeping momentum and succeeding at their next stop. Let's take a look.

Louisville's most famous ex-coach, even though no one knows he coached for Louisville, Corso is the face of ESPN's college football coverage and has been for a long time. Slowed by a recent stroke, Corso is known for picking the home team and putting on a mascot head for whichever team is hosting Gameday that week. Today's picture sums it up better than any: 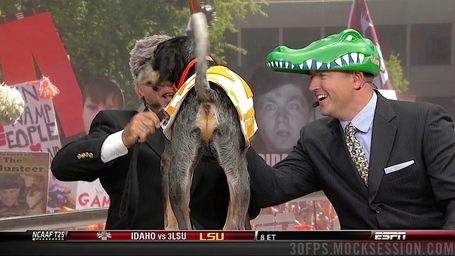 Keep in mind the people who made every element of that picture possible, from the silly hats, to the dumb/hilarious signs in the background and the anus of a blue tick hound prominently featured on national television for a solid 30 seconds, are the ones behind the billion dollar decisions that will shape the landscape of college football for the next 20 years. I cannot get over this. We are ruled by idiots.

Anyway, Lee Corso is the Godfather of post-Louisville-infamy, but he may not be the most infamous. That title belongs to the man, the myth, the legend....

Where to begin? The Pipe personally saved the Louisville program and built it into a national product. Some say he is the inspiration for the Dos Equis Most Interesting Man in the World ad campaign. Someone created this in his honor: 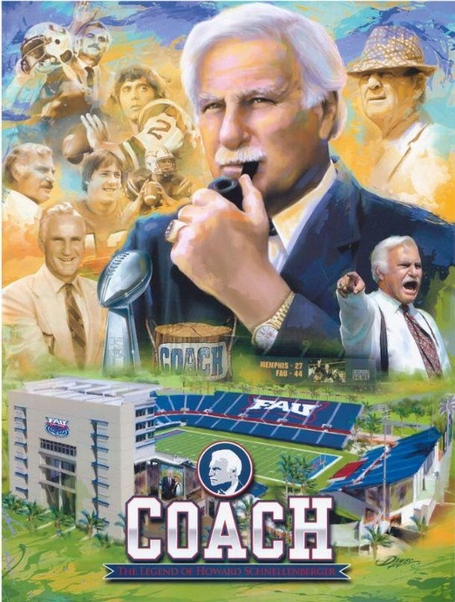 I have no idea why he left Louisville or what the circumstances were. Was his post-Louisville career interesting? Certainly. Should he be proud of what he did at Florida Atlantic? Of course. Was he "successful" after leaving Louisville? Not really.

Well, up until these last few weeks, it was this:

That's right, he slapped himself in the face at a press conference. It was weird. Also he really didn't do very well at MSU, then ended up moving back to Louisville and attending games as a fan (I saw him a couple times in the B&W club) and then ending up at Arkansas coaching special teams for Bobby Petrino. He was finally given another chance at a head coaching job when Weber State gave him a call, and then Petrino's infamy (see below) opened up the Arkansas job in the spring. Who did they call? John L. Smith. As I write this, Arkansas sits 1-2 with an OT loss to Louisiana-Monroe and a #BEATEMDOWN at the hands of Alabama. Also he filed for bankruptcy. The point is, John L. Smith's post-Louisville career would be a novel I would read, which is all well and good, but not what you are looking for when you crap on a fanbase on your way out the door after having your team hear about your new job at halftime of your bowl game. You pretty much need to succeed in a big way after doing that.

Bobby Petrino was almost the exception that proved the rule, until, well, I'll let LSUFreak show you what happened:

Petrino had success at Arkansas, although coming in second in his division of his conference but still getting to go to a BCS Bowl is a weird way to achieve success. Anyway, Petrino was infamous while he was at Louisville - stringing together a 4-year span that rivals anyone in college football, especially considering it was his first head coaching job, while at the same time alienating dozens of fanbases by interviewing for jobs that were not technically open and then lying about it. "Petrino to XXXX" became a common phrase and didn't stop once he got to Arkansas.

I say he was the exception that proved the rule (even though he completely flamed out in the NFL) but he actually becomes the rule's shining example. I have no idea where he will end up next year, but no matter how much success he has, people will likely always remember him more for off the field antics and drama than victories. And no matter how good his teams at Arkansas were, they were still going to be the 3rd best in their own division, and there was not really much he could do about that. I would take him back in a heartbeat, and I hate myself for it.

Left off this list: Ron Cooper (who found success as a coordinator in the SEC) and Steve Kragthorpe, who was demoted from offensive coordinator at LSU before his first game for health reasons, and then as QB coach watched his team's quarterback pay one of the worst games in college football history in the national championship game last year. Neither of them left by choice, but both have a certain level of infamy.

What is the point of this post? Oh, no reason. Charlie Strong, our current coach, has said repeatedly that he is here to stay, and I believe him. But if the music stops and we get left out of the power conferences, would anyone really blame him for going someplace where he could compete for a national championship?

Maybe he can break the mold at his next job, but if history is any guide, the next stone isn't as stable as it might look.