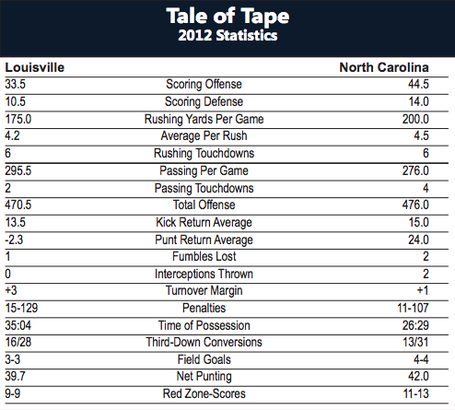 The chance to make a real national splash for the first time in six years is here, people. It's going to be a beautiful day and it should be the best home environment for a game since the West Virginia showdown in '06. I don't see anything to not be excited about.

I will be wearing the red Louisville Football shirt over to the pre-wedding hangout with the other groomsmen.

I'm either tearing this wedding up or I'm burning it to the ground. Regardless, there's a 95% chance I get into trouble. Keep me in your thoughts between 8 p.m. and midnight. That's generally the damage period.

Pregame Meal: Having chicken wings and beer over at the groom's house.

Bold Prediction: We hit the upright on a field goal attempt.

Not saying it goes in, not saying it doesn't, just saying it happens. Need to get back on track after last week's complete bold prediction flop.

Titus Teague Playing Alert Level: Unmellow Yellow (Lock on special teams, unlikely, but not extremely unlikely, in any other capacity)

He's been held back up until this point and gets unleashed for the first time this season. The results are cool.

--Saturday’s game will be the seventh meeting in the series between North Carolina and Louisville with the series deadlocked at 3-3. The Cardinals have won two of the last three meetings, but the Tar Heels did win the last encounter, 14-7 last season in Chapel Hill, N.C. The Cardinals are 1-1 all-time in Louisville and won the last game, 69-14 in 2005.

--Louisville is looking to go 3-0 for the first time since the 2006 season when they finished 12-1 and won the Orange Bowl.

--Before last season, Louisville had won the last two meeting between the two schools by a combined score of 103-14.

--North Carolina is seeking its tenth straight regular season win over a non-conference opponent. The Tar Heels have not lost to a team outside the ACC in the regular season since the 2010 opener vs. LSU.

--UNC head coach Larry Fedora is 0-2 all-time against Louisville, with both losses coming as head coach at Southern Mississippi. Charlie Strong and U of L defeated the Golden Eagles 31-28 in the 2010 Beef ‘O Brady's Bowl.

--Louisville is 12-1 against the spread in their last 12 games against ACC opponents.

--Both North Carolina running back Gio Bernard and wide receiver Jheranie Boyd will not play because of injuries. Bernard was a freshman All-American and first team All-ACC selection last season.

--UNC Junior A.J. Blue made his first career start at tailback in place of the injured Bernard at Wake Forest last week. Blue came into the game with 210 career rushing yards, but gained a career-best 106 on 19 carries against the Deacs. He will start for the Tar Heels this afternoon.

--Don't use your thunderstick as a penis. I'm really serious, guys. Do not do it.

--Louisville running back Dominique Brown will miss his third straight game because of a knee injury. Brown scored U of L's only touchdown against North Carolina last season.

--This is the 11th straight season UNC has faced a Big East opponent. Since 2002, Carolina has played 16 games against Big East teams and is 7-9 in those contests with three consecutive victories.

--Louisville is 18-37-1 all-time against current members of the Atlantic Coast Conference. The Cards los to both UNC and NC State last season.

--"This weekend, we will find exactly where we are as a football team and steps that we need to continue to make to change his program and get it headed in the right direction. We're excited about the challenge." --Charlie Strong

--"I guess some of the people in the country don't give us enough respect. They probably think we don't play anybody. This week, we should solve that." --Brandon Dunn

--"Teddy Bridgewater's pretty special. I think Charlie's got to be very happy about the way that young man has performed at this point. I think he's got to be excited about the future there at Louisville because the kid looks like he can beat you with his legs or he can beat you with his arm. Those kind of quarterbacks are by far the toughest to try to defend." --UNC coach Larry Fedora

--"(Bridgewater's) an outstanding quarterback. He's making plays for them, and doing what the coaches ask of him. I feel like he's watching film a lot and knowing what his reads are and making those plays." --North Carolina linebacker Kevin Reddick

--"We're looking to get three and outs and once they hit a big play they get right back on the ball. It rattles you a little bit. It gets you playing uncomfortable. But as a defense we have to understand it's the type of offense that we're going against so we have to prepare for it throughout the practice week." --Brandon Dunn

--"Sometimes you need the setback just to go forward again. That was a big setback for us and now we know what we have to do to win." --UNC safety Tre Boston

--"A lot of guys think they're NFL caliber. Coach is like, 'this is the game to prove yourself.'" --Brandon Dunn

--"We know our O-line is one of the best in the country. Every series the skill player who scores goes and thanks the O-line because we couldn’t do it without them." --UNC QB Bryn Renner

--"They're going to be on the ball right away. (Fedora) has two tempos. It's really hard to practice it because you can just go out and practice all you want, but in the game it's so different. We have to survive that first quarter of it where it's coming right at us." --Charlie Strong

--"Their D-line is always good, but (offensive line coach Dave Borbely) stresses our experience. We had a lot of inexperienced guys at different positions last year but he's confident in what we have, and we (have it) too. We know what we have to do and will try to execute that on Saturday." --Jamon Brown 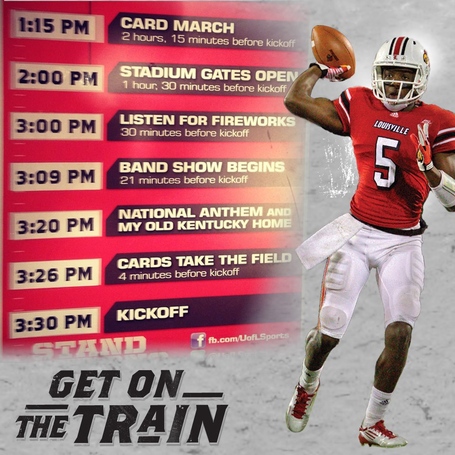 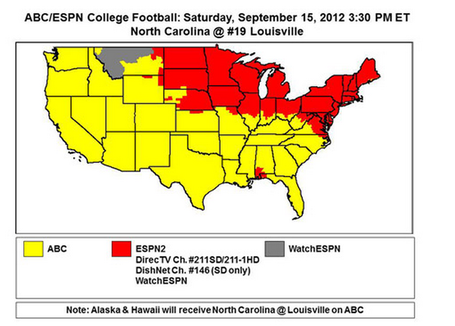 And some solid work via Taylor Gwynn: 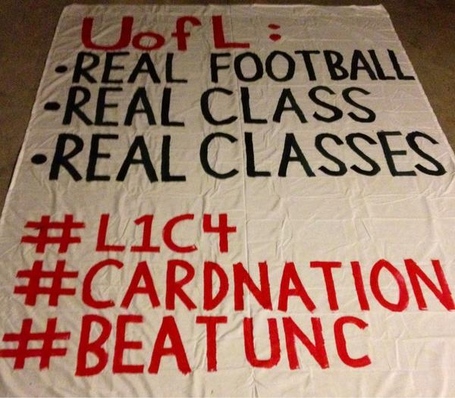 After three season of complete and utter frustration and two seasons of guarded optimism for the future, we deserve this moment back in the national spotlight. It's been a hell of a road to get here, but it's time to start taking things a step further.