Share All sharing options for: Dominique Brown Unlikely To Play Against North Carolina

Brown was Louisville's leading returning rusher heading into this season, but has missed the Cards' first two games because of an unspecified knee injury. 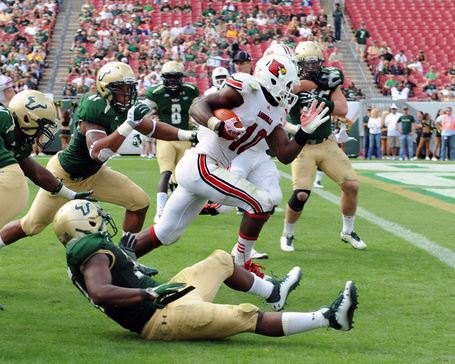 Against North Carolina last season, Brown carried 18 times for 47 yards. He also caught three passes for 33 yards, including a late fourth quarter touchdown reception that proved to be U of L's only score of the day.

I know the fact that this "minor injury" has turned into a three-week stay on the sidelines has plenty of people concerned, but I do not think this is a situation that's going to drag on much longer. If Brown isn't suited up for next week's game against Florida International, then we can all flip the panic mode switch.