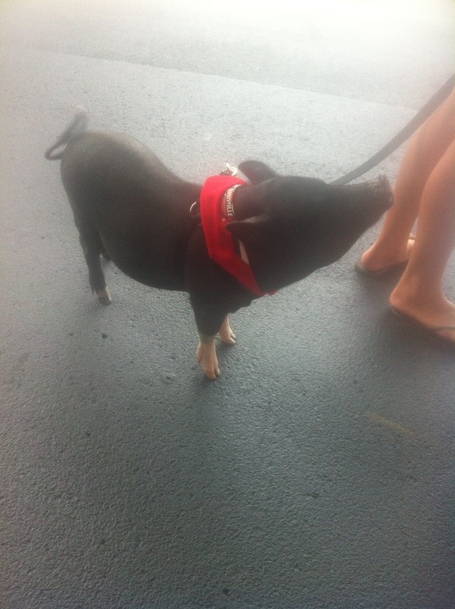 If you've been waiting for a Cardinal pig to grace the top of a news and notes post...well, there you go.

I really don't know what else to add here. Keep doing your thing, Cardinal Pig.

U of L has updated its player bios for the men's basketball team, and Russ Smith has now gone public with his efforts to make "Rickdiculous" a thing.

--Best moment of his career to date was reaching the Final Four and winning a BIG EAST Championship.

--Few people know that he loves to sleep.

--Most proud of being in school.

--His parents have had the greatest influence on his athletic career.

--Feels Dave Chappelle would be the best actor to play him in a movie.

--Feels he could fare well on any reality show because "I'm funny, smart and a good singer."

--What impresses him the most about Coach Pitino: his success as a coach and with his players. "He's Rickdiculous!"

--Best thing about being a Cardinal was wearing the InfraRed uniforms during UofL's tournament run last season.

Pretty sure plenty of people have heard that Russ likes to sleep.

Also of note: Peyton Siva says Blackboard is his favorite website, Luke Hancock claims Angel Nunez is the best player he's ever faced, and Mike Marra wears the number 33 because if you turn it sideways it makes his initials, "MM."

As that attention, Copeland's first reception this season drew the kind he wanted on the field. With Louisville facing third down from its 2 on the opening drive against Kentucky, he made a diving grab of Bridgewater's low pass near the right sideline for a 23-yard gain that jump-started the Cardinals' offense. Louisville went on to complete the 99-yard drive and a few more in a 32-14 victory with Copeland catching a career-high four passes for 51 yards.

I couldn't be happier that this is happening.

Starting Saturday, the Cards will be wearing stickers on the back of their helmets to honor the legacies of longtime supporters Bernard Trager and Owsley Brown Frazier.

The invasion has begun. 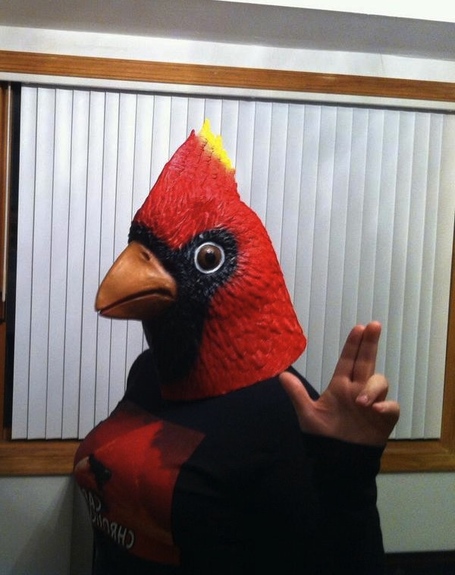 Your own chance to be the Card Chronicle bird for Halloween (or at a football game, or in class, or in the bathtub) is running out.

Two of those players McShay lists are offensive linemen who help make up what will easily be the largest O-line the Cards will square off against in 2012.

"A lot of guys think they're NFL caliber," Dunn said. "Coach is like, this is the game to prove yourself."

Good news from the world of basketball recruiting, where Louisville has made the final three for Marcus Lee. The California big man will choose between Cal, Louisville or Kentucky.

Speaking of big men, check out the new highlight video of recently-offered 7-footer Joel Embiid. The native of Cameroon has only been playing basketball for a year and a half and is incredibly raw, but Rick Pitino believes he has the potential to be the next Gorgui Dieng.

Louisville's Dec. 22 game against Western Kentucky in Nashville will tip-off at 8:30 and will be televised on ESPNU.

UNC head coach Larry Fedora spoke with the media on Tuesday and gave updates on a number of fronts heading into this weekend's game. Here's a snippet.

Want to ask you about Fedora ball a little bit. I like to call it that. You still got over 80 plays or so against Wake on Saturday. But it definitely seemed at a lot slower pace than it was against Elon.What do you think you need to do this week as far as getting that pace back on your side against Louisville?

"Well, we're going to continue to do the things that we're doing in practice and trying to prepare ourselves to get better in that area. I mean, we're still not where we want to be. We've still got guys that are still learning how to get lined up quicker, how to process quicker. Our quarterback is doing the same thing. Our offensive line making the calls quicker so that we can snap the ball at a more fanatical pace. When that happens, then we'll get to where we want to be, but we're still a ways from that."

How is Bryn Renner doing? Any effects from the collision?

"None whatsoever. There have been no effects."

Couldn't be a bigger fan of the term "Fed Spread." Makes me really wish we had a coach whose name rhymed with "offshoot of the West Coast offense."

Guess we'll have to settle for the largely misleading "Ted Spread."

"Long Shawn?" No, I know, that doesn't even make sense. Dammit. 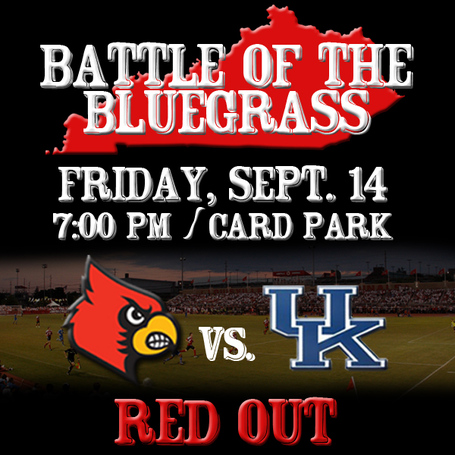 Again, go to Cardinal Park, drink some $3 beers, watch Louisville beat Kentucky in a sporting event, kill about ten hours (could be with sleep, could be with...I don't know, a popsicle stick replica of Freedom Hall...you guys can think for yourselves), then head over to the stadium for the biggest home football game Louisville has played in a long time.

C.L. Brown takes a closer look at Jamon Brown, who was first forced into a starting role on the offensive line in last year's loss to North Carolina.

U of L checks in at No. 24 in Andy Staples' latest college football power rankings for Sports Illustrated.

When I tagged along on a six-day bus trip with a South Florida-based 7-on-7 team in 2010, Teddy Bridgewater was the team's quarterback. While on the bus and touring campuses, Bridgewater acted like a typical high school kid. When the players took to a mostly dirt field behind a hotel in Oxford, Miss., for practice, Bridgewater seemed to age 10 years. He commanded the attention of his teammates. He noticed tweaks that needed to be made in the offense. He looked as if he'd been born in front of a huddle. Some quarterbacks simply have the requisite intangibles, and Bridgewater is one of them. Add good blocking and decent skill players, and you get a sophomore in his second season as a starter completing 81.7 percent of his passes while averaging 30 attempts a game. The competition level jumps this week with North Carolina coming to town, but there is no reason to doubt that Bridgewater can handle it.
Last game: Beat Missouri State, 35-7Next game: Saturday vs. North Carolina

Cardinal Authority has a subscription only (sad face) piece on kicker Matt Nakatani and his big debut last Saturday. I can tell you that I enjoyed the description of the story.

Since the Big 12 clearly appears to be the second most desirable landing spot in college sports right now, this attempt at humor through analogy fails on pretty much every level. Or maybe Mick is just really bad at giving compliments. Start with something simple, Mick. See how they react to that and then proceed accordingly.

One good thing about North Carolina's loss to Wake Forest last week is that they now head into Saturday's game already knowing what it feels like to play on the road.

On already having played on the road:
"I haven't really thought about it. We've been on the road once; if that helps us, it helps us. For us we evaluated every detail from the time we get together Friday morning to what they do through the ball game. We've talked extensively about that today but we wouldn't change anything. We don't think that had any difference in the outcome of the game. We're constantly evaluating every thing that we do so we can do the best by our guys and get them in the best position. Our kids will be familiar with an on-the-road routine at least."

But have you tried playing on the road...with thundersticks?

The U of L/UK game watch party-goers at The Parlor in Los Angeles wanted everyone to know that they enjoyed themselves on Sept. 2. 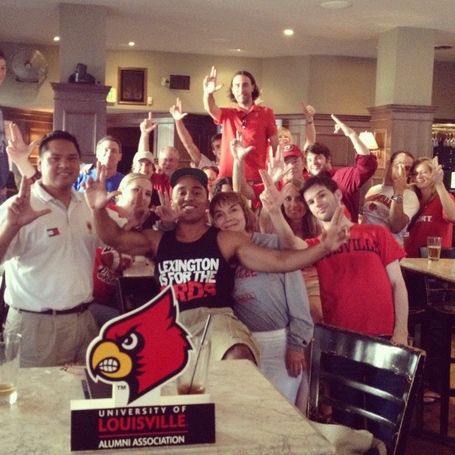 The North Carolina defense has had a very focused week of practice and are ready for the challenge of dealing with Teddy Bridgewater.

The health of Gio Bernard continues to be the main story in Chapel Hill this week.

Although the Tar Heels are just 1-1 they are a strong football team that lost in a tight road contest to ACC and instate rival Wake Forest last weekend. The decision came down to the last few minutes with the Demon Deacons adding the winning score with just over two minutes remaining. North Carolina suffered without lead rusher Giovani Bernard in the game and it is unclear if he will be available for this matchup, although head coach Larry Fedora is optimistic.

"I don't think he will ever not be ready. He wants to be out there on every snap," Fedora said while adding how Bernard's absence effected the team, "There's no doubt (we missed him). You have a player of his caliber and is such a big part of what we do offensively."

Bernard participated fully in practice for the second straight day on Wednesday. Fedora won't come out and say it, but I don't think there's any doubt that he's going to be suited up and on the field Saturday afternoon.

I would have enjoyed that video more had it been longer and had significantly less...uh, Trevor Matich.

The best possible preview you will find of tonight's Rutgers/South Florida game.

And finally, I think the team has been made fully aware that this Saturday is their shot to make a major statement while playing in the national spotlight.

All eyes will be on us this Saturday. Time to prove the world wrong

I don't think there's any question this is the first real chance the program has had to make a "we're back" statement that would have some serious pop behind it. I couldn't be more anxious to see whether or not our guys rise to the occasion.