Share All sharing options for: 10 Belated Thoughts On Louisville/Missouri State

The window to discuss this game in any extreme depth has come and gone, but there are still a few issues that demand attention before focus shifts entirely to Saturday's monster game against North Carolina.

1. I hate to say that I was disappointed in the game Saturday, because that implies that the team gave a disappointing performance, which it didn't. The disappointment resides in the fact that the Cards didn't come out and completely dominate for four quarters, which is what I think most of us were hoping to see.

The game was never really in doubt, but it also never had a "the home team can name the final score" feel. I suppose such an instance is asking a tad much of such a young team playing just its second game of the season, but...what can I say, that was my hope.

2. I think the most surprising aspect of the game was the fact that Louisville wasn't able to assert its will on the ground. The Cards averaged just 3.5 yards per carry on their way to a 131 yard day, and their longest run of the afternoon was just a 12-yard scamper from Senorise Perry. Jeremy Wright tweaking his ankle likely played some role in all of this, but I thought this would be a game where the running lanes would be wide and the speed of the Cardinal backs would be able to shine. Neither of those things happened.

3. Interesting to see Matt Nakatani handle the placekicking duties a week after John Wallace got the nod and really did nothing wrong. Corey's son took full advantage of the opportunity by drilling attempts from 19 and 45 yards out.

4. It was also the day we'd all (me) dreamt about the entire offseason as the other No. 18, Sir Titus Teague, took the field not only on special teams, but at cornerback. The final line: one tackle, one forced fumble, one facemask penalty and one overly excited person in the crowd.

5. We won a football game in which Quacky and Air Louie both made appearances. 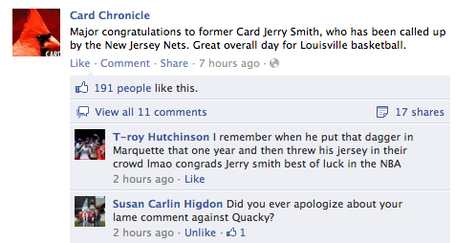 Hope you got it all out of your system on Saturday, U of L.

6. Teddy was terrific again on Saturday, but I do think there were multiple instances in which he was too quick to bolt out of the pocket. The criticism from Coach Strong after the game was definitely somewhat of a motivational ploy, but there was also a lot of legitimacy in what he said. Teddy knew he could scramble and make plays whenever he wanted against Missouri State, but I don't think the same will be true here in five days.

7. Just one of Joshua Appleby's seven kickoffs made its way into the endzone for a touchback. That needs to be improved.

8. Calvin Pryor is really, really good. He and Hakeem Smith together could not be more important considering how loaded U of L's schedule is with teams who run the spread. You can only succeed against the spread if your secondary can make one-on-one tackles in space, and both Pryor and Smith have done a tremendous job at that through two weeks.

10. Loved hearing how excited Strong was about Nate Nord's touchdown reception after his earlier drop. Nate's certainly been through a lot over the course of his five years on campus, and seeing him off to such a positive start in his final season is pretty cool. Then there's also the fact that he's a pretty important part of the offense and we need his confidence to be as high as possible.

Bonus Thought: "Honey Mustard" is my favorite U of L football nickname in a long time. Get used to it, Damian.