How Former Cards In The NFL Fared: Week One

Share All sharing options for: How Former Cards In The NFL Fared: Week One

Carried the ball 12 times for 42 yards and a pair of touchdowns in his Chicago debut.

Caught three passes for 32 yards as the Falcons beat the Chiefs 40-24.

Connected on all three of his field goal attempts including an NFL record 63-yard try just before halftime.

Made seven tackles, forced a fumble and saved the day with a pass defense on the final play of the game as the Cardinals beat Seattle 20-16.

Started at right tackle for the Seahawks in their loss to Arizona.

Started at center for the Bills in their loss to the Jets.

Played but did not record a catch in Carolina's 16-10 loss to Tampa Bay.

Did not record a statistic in Pittsburgh's loss to Denver.

Was on the inactive list for the Bears' win over the Colts.

Recorded two tackles and broke up a pass in New Orleans' loss to Washington. He was carted off the field early in the second quarter with an unspecified leg injury. 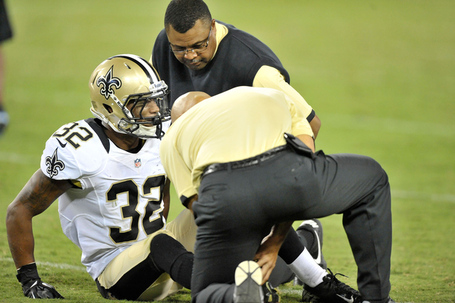 Made three tackles in Arizona's win over Seattle.

Was on the inactive list for Seattle's loss to Arizona.

Was on the inactive list for Tennessee's loss to New England.