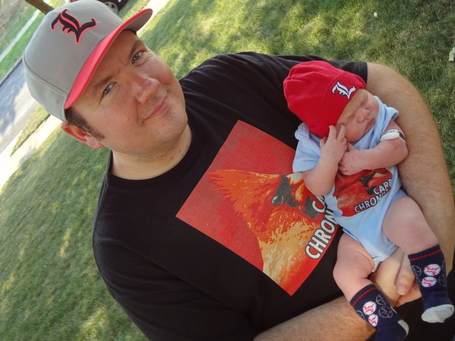 That's Phil Sisto completely Chronning out with his newborn son, Alexander. It sounds exxxtremely illegal, but it's actually celebrated in most cultures.

The Louisville basketball team will again be hosting Pikeville for an exhibition game before the start of the regular season. This year, the game will be played on Nov. 1 and will mark the return of the World's Hottest Male Athlete to the KFC Yum Center.

Multiple sources report that Tim Henderson strained an achilles on the court today. If this isn't justification for an offseason firing of Rick Pitino, then I'm not sure what is.

Attitude problems and off-the-field issues have kept Adrian Bushell from reaching his full potential thus far in his college career. For Louisville's BCS hopes and Bushell's NFL dreams, Rick Bozich says that has to change now.

Louisville lost to Pitt in Papa John's Cardinal Stadium, 21-14. Give the Cards that victory and they win the Big East title outright and play in the Orange Bowl. Pitt quarterback Tino Sunseri had his second-best passing last season that day, completing 16 of 23 passes, including one for a touchdown.

Here is the answer: He was late for a team meeting, again, an annoying move that inspired Strong to bench him for Pittsburgh. Bushell said it was not the first time he had been late.

"I just overslept," he said. "Not taking care of business. Of course, I was mad. I've got to accept the responsibility and move on and learn from it."

Has he grown up? Bushell says he has. In less than a full year at Louisville he has worked himself into the best shape of his life, adding 15 pounds to his fat-free 5-foot-11, 185-pound body. He is certainly in the discussion for the fastest player on the team, a guy capable of taking kickoffs 100 yards.

The best thing about this period of the offseason, I think, is that it's the time whe---OH MY GOD WHY ARE THE DEPAUL PEOPLE WRITING ABOUT CARDINAL FOOTBALL?

Now get out of here and go play in that puddle.

Gaines brings speed to the group as well. Last year before being injured, he looked very impressive to me in open practices.

U of L coach Charlie Strong said he moved Gaines to cornerback while they tried to fill a need on defense. With four experienced cornerbacks (Adrian Bushell, Andrew Johnson, Terrell Floyd, Stephan Robinson) returning this season, the Cards could afford to bring Gaines back to offense.

"I was saying to Wat (offensive coordinator Shawn Watson) and the offense, ‘We need to get us a guy over there that has some energy to him and somebody going to get that group of guys going,'" Strong said. "And that's what Gaines has been able to do. But he's a really good player also."

I'm turning into the biggest Charles Gaines fan you know.

ESPN's Andrea Adelson has Adrian Bushell at No. 21 in her countdown of the best players in the Big East.

The Louisville men's soccer team is ranked No. 7 in the preseason NSCAA/Continental Tire Preseason poll. This marks the third straight year the Cards will start the season with a top ten rankings.

Speaking of the soccer team, they're making sure that the infra-red movement is alive and well at U of L. 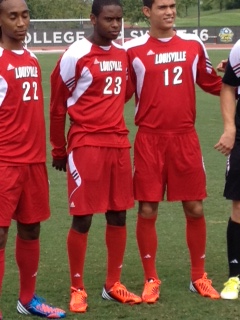 Football media day was a little short in the memorable quotes department this year, the following quip from Mario Benavides being an exception: "If my mom hit Teddy, I'd have to do something about. I'd apologize later though."

Whenever Mario's done with football, I'm pretty sure there'll be a media career waiting for him somewhere. 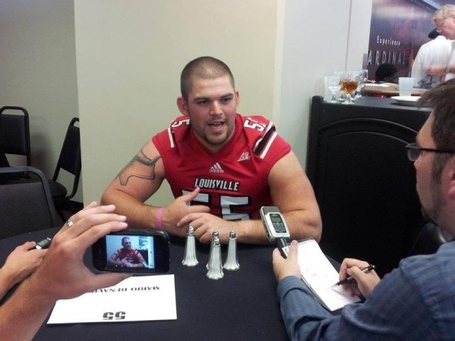 Can't say I approve of his all sodium diet, but whatever works man.

I watched the replay of the Belk Bowl this afternoon on ESPNU and was almost as mad as I was during the actual game when I saw Preston Brown's personal foul penalty again. Without question one of the top five worst calls I've ever seen in a Louisville sporting event, and probably top three most angry a call or no call has ever made me.

Former Card Joe Tronzo is doing some work for CardinalSports.com this season. Check out the first installment of his "Four Downs" series right here.

It isn't altogether clear, in fact, whether his gloves were prompted by the cold in Kentucky or by the tropical conditions back home in Florida.

When he was finally emboldened to broach the subject during fall camp, Watson recalls Bridgewater telling him: "There was so much humidity down South, my hands were always sweaty and I could never get a grip on the ball. I started wearing gloves because they're tacky, and I didn't have a problem, so I kept on wearing gloves."

"Good answer," Watson replied. "I'm not messing with it. ... I just asked him because I needed to know."

I'm not sure why WDRB chose to air this viewer comment at the end of its recent point of view segment.

Reach for the wormhole, so if you fall you land on an endless abyss of unknown.

Did you know that Paul Simon actually wrote "April Come She Will" about the dead period in college sports? It's not true, but it's now an untrue fact that you know. I do, however, like to listen to the song and picture a cheesy - but well produced - montage of all my offseason highlights.

I do the same thing with "Whistle While You Twerk" by the Ying Yang Twins.

If you've ever wondered how former U of L players view Bobby Petrino now, here's one who isn't especially fond of the man who led the Cards to the an Orange Bowl title.

Any eligibility concerns for Kentucky freshman Nerlens Noel have been put to bed.

Surely to God Sandy Bell is being paid more than Joker Phillips.

The U of L cement truck is back and going hard over at Jim Patterson Stadium. 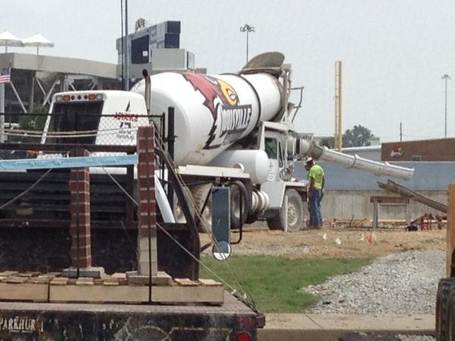 Did you get it this time? Going hard? Like cement?

Dammit, I don't even know why I try sometimes.

Kentan Facey, the Jamaican big man whom Louisville offered a scholarship a little less than a month ago, has committed to Connecticut.

The best (serious) excuses that I've heard from Kentucky fans as to why the school sent back nearly 1/3 of its allotted tickets for the U of L/UK football game:

1. We don't want to tailgate in a parking lot
2. They sell alcohol at the stadium
3. I'm not going to pay money to support a game featuring a program that cheats

For what it's worth, Louisville fans bought up those tickets in 19 minutes.

Class of 2013 athlete Jelarius Watkins has named Louisville as his leader. If he ends up a Card, I'm sure we'll all be able to come up with some Watkins jokes about his name.

What do you mean I used his last name instead of his first for the punchline? Oh, I see now. No, we'll just leave it I think it still works. 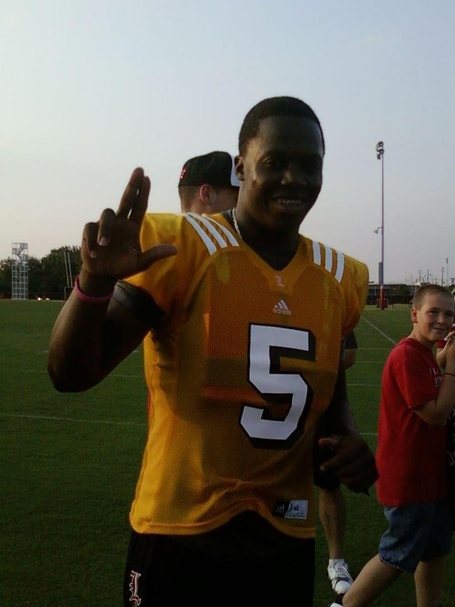 DePaul will open the Cancun Challenge against Gardner-Webb. I mean...of course they will.

God you just aren't good at things, DePaul, and it never, ever ceases to amuse me.

And finally, the Kentucky football team ended its practice yesterday by having an ice cream truck come out to the field and treat the Wildcat players.

I pray that each one of these gentlemen went with the red baseball glove with the baseball gum ball in the middle. They're already playing football for Kentucky and I won't wish a second life-changing mistake on anyone.