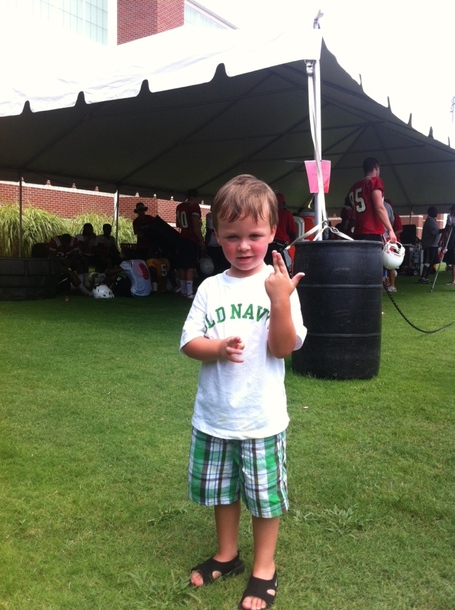 Ben "The Bull" Anderson loving life at the U of L open practice on Saturday.

He gets his enthusiasm from his father and his unparalleled love for all things Cardinal sports from his grandfather.

U of L announced today that the football team's Oct. 26 game against Cincinnati will kickoff at 8 p.m. and be televised by ESPN2.

A Friday night battle for the Keg of Nails featuring two teams that might have by hat point established themselves as the best in the Big East? Yeah, I'm in for that.

C.L Brown has a must-read story on Hakeem Smith.

"If I was to ask anybody on the team, or if we took a hand count of votes, who was the most accountable guy out there, it would have to be Hakeem - whether he speaks or not," junior linebacker Daniel Brown said. "The proof is in the pudding."

Smith's unassuming personality goes back to his childhood. He was the youngest of four kids. His sisters, who are twins, are autistic. Smith said he learned to be patient and keep a sense of calm while helping them get prepared for school despite being eight years younger than they were.

As early as elementary school, Smith would iron his mother's clothes while she slept so she'd be ready for her third-shift job. He was just 12 when he'd accompany his stepdad, who worked as a lighting contractor, on jobs.

"I used to be eager; I'd go every day and wake him up like you're about to go work somewhere," Smith said. "I just came more responsible at an early age. I was a workaholic."

Jody Demling of Cardinal Authority has confirmed that Zeke Pike is now officially on campus and will play tight end for the football team.

According to Kyle Tucker of the The Courier-Journal, of the 3,440 tickets to the Louisville game that Kentucky did not return to U of L, 200 still haven't been sold.

Kentucky fans simply are not excited about Wildcat football.

Adam Zagoria writes that a hoops "fervor" is rising in our area with Louisville, Kentucky and Indiana all set to contend for a national title in 2012-13.

Rick Pitino is excited for the upcoming basketball season and not just because his Louisville Cardinals should be the favorite to win the Big East Conference.

Pitino knows that Indiana, Louisville and Kentucky - traditional basketball rivals all located within a few hours of one another - could all contend for an NCAA championship.

According to The Sporting News preseason rankings, Indiana is No. 1, Louisville No. 3 and Kentucky No. 5 (UCLA is No. 2 and Ohio State is No. 4).

"In our region, basketball's really come back in a big way with Indiana, Kentucky and us," Pitino told SNY.tv. "It's been a while since all three have been there so it's really picked up the fervor of basketball. Basketball is very big in Kentucky and Indiana anyway."

Marcus Caffey, a redshirt freshman who was expected to start at cornerback for Kentucky, has been declared academically ineligible. This has led to a massive shakeup in the Wildcat secondary.

The folks at CBS asked 70 different college basketball coaches which one player in the country they would add if they could, and The Gorgster was among those receiving votes.

Had a nice wedding weekend in Columbus, but am thankful for a month-long beak before the final two of the year in September.

Highlights included angering the bevy of OSU fans in attendance by changing the "O-H-I-O" part of "Hang on Sloopy" to "On-Pro-Ba-tion," and then somehow managing to accidentally purchase Men In Black III when we got back to the hotel room. That, my friends, ia a $20 mistake. Was not worth it. Fell asleep about three minutes later.

Solid dedication from Cardinal fan Aaron Cooper to get this pic by the famous "We're Miles Ahead" billboard off 64. 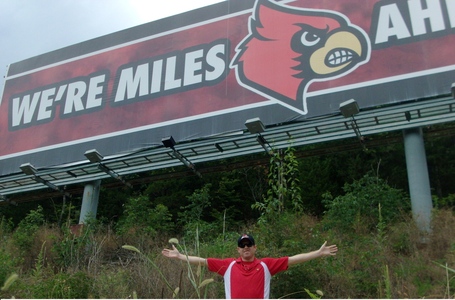 ESPNU will be replaying the '11 Belk Bowl at 10 p.m. on Wednesday and 11 a.m. Thursday. Two opportunities to marvel at Preston Brown's ability to carry the ball.

The U of L men's soccer team has been picked to finish third in the Big East's Red Division this season. Junior Andrew Farrell was also selected as the co-Preseason Defensive Player of the Year.

Vance Bedford continues to be the U of L football coach with the quotes most likely to inspire you to run through a brick wall.

Another post-practice question. A reporter asks him how he balances looking for good technique with having players fly in helter-skelter.

"Fly in helter-skelter," Bedford said. "It's up to us to teach technique. I want to see guys flying around. If it moves, hit it. Right now, if it crosses the line of scrimmage, hit it, I don't care if it's a coach, referee, Rocco (Gasparro, football sports information director) included, I don't care who it is, that's having fun. If we do that, we have a chance to be good on defense this season."

Let me take a break here for those who want to get up and hit something.

U of L's offense figures to be improved. It better be, after ranking 103rd in the nation in total yardage last season. It's going to make headlines. Bedford, however, wants his guys to be the backbone.

"Anytime you have a chance to win games, you do it with defense," he said. "Offense is going to score points. Somewhere you have to slow people down. So these guys know what's expected of them. The expectation right now for defense, it's go out there and 11 hats to the ball. We've got to gang tackle. We've got to get takeaways this season, something we haven't done since we've been here."

Congrats to former Card B.J. Rosenberg, who was called back up to the majors late last week and pitched two beautiful innings for the Phillies on Saturday. He's the best pitcher in the bigs right now to have ever given up a double to Mike Rutherford...and to have struck Mike Rutherford out about five times.

Nerlens Noel apparently had a rough week at the adidas National camp, and Kentucky fans aren't happy that people are talking about it.

The pre-100m swag off has probably been the highlight of the Olympics thus far.

Earl Heyman is the 2012 Heavyweight Golden Gloves boxing champion in the state of Indiana.

Some video highlights from day three of the adidas Nations camp featuring Peyton Siva. Also, Patrick Young is probbaly going to find and murder the editor who included a K in the spelling of his first name.

CBS gives three reasons to be both optimistic and pessimistic about the 2012 Louisville football season.

Experienced Bridgewater: Sophomore quarterback Teddy Bridgewater returns to his starting role after splitting time as a true freshman in 2011. After throwing for more than 2,100 yards and 14 scores last season, Bridgewater will look to advance his relationship with a young but talented receiving corps.

Defensive backfield: Anchored by cornerback Adrian Bushell and safety Hakeem Smith, the Cardinals will be a tough bunch to throw on. In addition, Smith is a big, physical safety, so his presence is certainly felt in run support, as well. Smith is the leading returning tackler for a Louisville defense that allowed just over 20 points per game a season ago.

Winning attitude: In coach Charlie Strong's first two seasons, the Cards were picked to finish last -- or second-to-last -- in the Big East. Both years, however, Strong led the team to a bowl, nearly winning the conference last season. Now, with more talent at his disposal, his team is picked to finish first. The Cardinals have already proven they can win in the Big East. Now is their chance to win the whole thing.

Kentucky Country Day ace Will Smith has committed to play baseball at Louisville.

You don't wanna see his hand where his hip be at.

The Sports Bank has the Cardinal football team ranked 24th heading into the season.

Rodney Purvis' eligibility is still being looked at by the NCAA, which means he'll have to miss NC State's exhibition tour in Spain. Since he committed to Louisville but never signed with the Cards, I can only assume he'll be declared eligible before the start of the season.

A Kentucky website says that Cards and Cats will fight about almost anything at this point.

And finally, I just wanted to take a second to thank everyone for not engaging in the equal parts pointless and annoying political banter that seems to ruin every website on the Internet during presidential election years. It has been noticed and it is extremely appreciated.