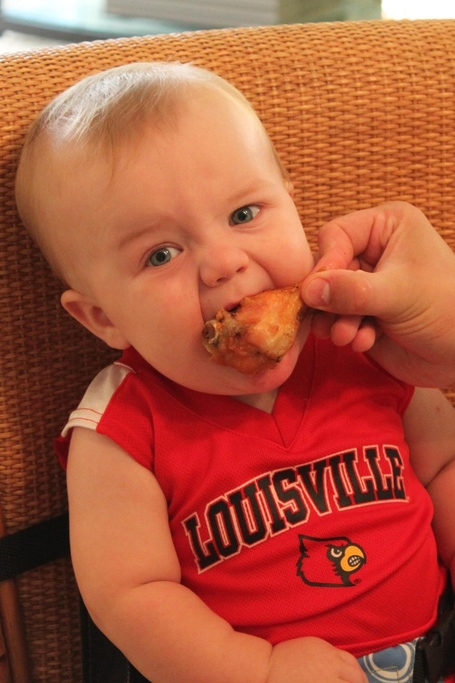 Class of 2030 recruit Zach Perry sent me this picture himself accompanied only by the text: "make sure this message gets passed along to Kentucky."

Evan Hilbert of CBS Sports likes the Cards by exactly that number.

Magic number for Kentucky: 2,060. That's the number of tickets the University of Kentucky returned unsold to Louisville. Usually Wildcat fans cram into Papa John's Cardinal Stadium, but not this year. Louisville will have a decided home-field advantage.

The game comes down to: Composure. If the young Cardinals can mantain their composure in the rain, they win easily. They are the superior team on both sides of the ball. One area of concern, however: kicking. If the game comes down to a field goal, Strong is not confident in his place kickers.

Check out the new bowl banner inside PJCS:

And the new Crunch Zone banner: 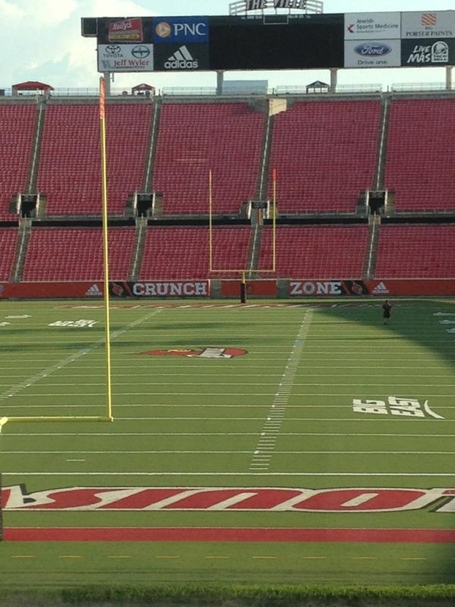 Big things happening at and inside The Oven. As George Durant would say, don't shit ya pants.

In a fairly cold-blooded move, the New England Patriots cut former Cardinal star and Super Bowl MVP Deion Branch today. Still one of the nicest guys in the league and one of the best ambassadors for U of L sports. Here's hoping wherever he lands, he lands well.

I just wanted to take a second to say thank you to CardinalStrong and gocardsguy for their offseason contributions with the Cardinal Countdown and things to watch for against Kentucky. I think I speak for all of us when I say you guys helped make the offseason far more bearable around here.

WHAS says the Governor's Cup has a short, but memorable history at Papa John's Cardinal Stadium.

Billy Gillispie, the man Kentucky fans were convinced had "the very essence of Coach Rupp" lying within him, is now in the middle of a potential player mutiny at Texas Tech. 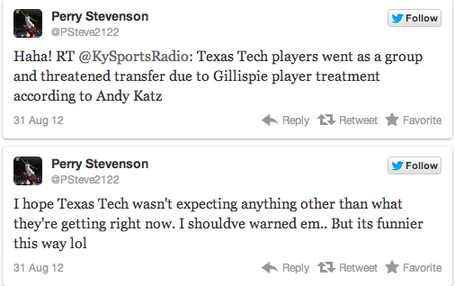 Obviously we're all rooting hard for the best possible weather on Sunday, but admit it, there's a little part of you that wants to tailgate in a poncho for at least a short period of time. I mean, it's just like when you used to go under your bedsheets and pretend they were a fort as a kid, except now alcohol is involved. It's pretty much the best parts of being a kid and the best parts of being adult colliding in one glorious embrace.

Plus I already spent the six bucks.

Several game previews continue to believe Michaelee Harris will have an impact on Sunday. Perhaps they saw his "Ain't too Proud to Beg" rendition and are inferring things. 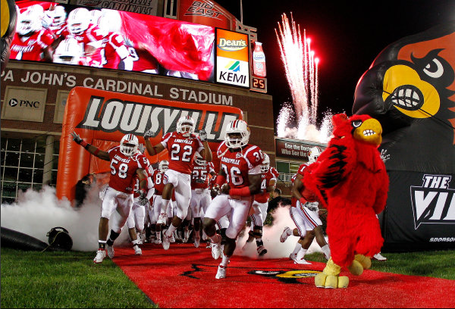 A reminder that the men's soccer team kicks off its home season on Saturday night at 7 against Belmont.

4. BOZICH: The great thing as well as the challenge in sports is that last year is over. Now you have to prove yourself again this year. What goals have you set as your programs begin a new season?

JURICH: "I don't think anybody was satisfied with last year. The great thing is we won those championships and our coaches were saying we got second in three or four others, so why didn't we win there?

"That's the attitude we like. I don't think one of our coaches is looking in the mirror saying, ‘Boy, that was a great year last year.' They're all saying, ‘Boy, we've got to get better. It starts with Coach Pitino. He went to the Final Four, had a miraculous year, probably the best coaching job any coach has ever done, in my opinion. He's not satisfied with that. He's set the bar higher.

"Charlie (Strong) has set the bar higher. The same with Sandy Pearsall (women's softball) or so many of our other coaches. They want to get better."

Kentucky is well aware of the magnitude of this season opener, and they aren't trying to hide from it.

Louisville and Kentucky are facing different challenges as the 2012 season gets underway.

Sherron Moore has a challenge for you:

The Louisville basketball team will open the 2012-13 season on Nov. 11 against Steve Masiello and Manhattan. That game should finalize U of L's non-conference schedule.

I want one of these for my front yard. 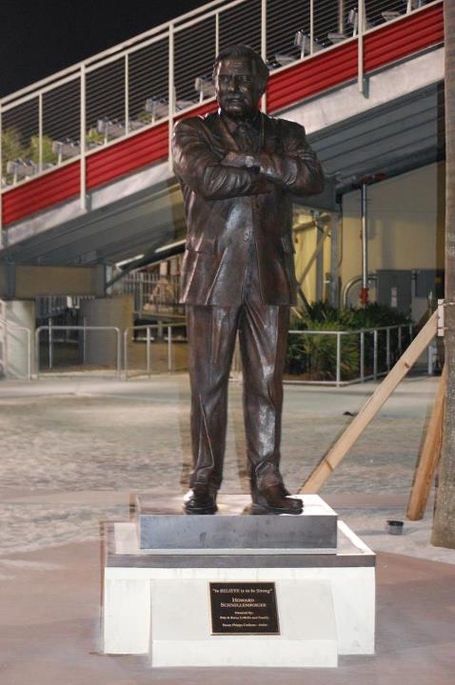 Except he's smoking a pipe...just like the miniature Dean's Milk Chug behind him.

C.L. Brown looks at all three running back candidates and lists the main reasons why they should and should not get the start on Sunday.

Eric Crawford gives up more Governor's Cup numbers than we could ever want to know.

6-3 -- UK's record in the series in games played in Louisville.

7.3 -- Yards per carry for U of L running back Jeremy Wright in the game between the teams last season (7 carries, 51 yards).

8 -- Number of players U of L has already lost for the season because of injury (Sid Anvoots, Tyon Dixon, Will Gardner, Michaelee Harris, Hunter Stout, Chris Walker, Jordan Whiting, Chris Zelli.) Anvoots has a back injury and Dixon a foot injury. The rest were knee injuries.

8-1 -- UK's record under Joker Phillips when it has won the turnover battle. (It has been 1-9 when turning it over more than its opponent, and 2-4 when the margin is tied.)

9 -- National ranking of U of L safety Hakeem Smith among NCAA active career leaders for solo tackles per game (4.7). Also the number of true freshmen on U of L's two-deep.

10 -- Number of scholarship seniors for U of L. Only eight teams in the nation have fewer.

Kentucky fans don't have to have facts or make sense to back up their hate for Louisville. If they did, they wouldn't be Kentucky fans.

The mother of your children that you always dreamed of.