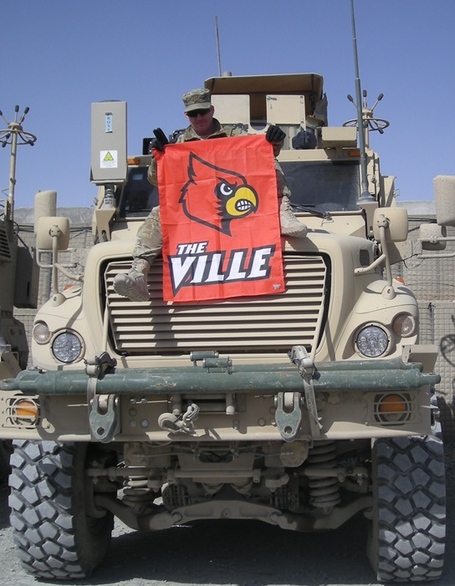 Our man SteelInTheVille was recently surrounded by Kentucky fans while deployed in Afghanistan, but that didn't stop him from holding it down for the Cards. Of course it didn't.

Spread check (God it feels good to type that again): Louisville by 13.5

That near two touchdown spread makes Kentucky the biggest underdog of any BCS team in week one.

Attention all out-of-town Cards fans: we will once again be putting together a "where we're watching" post for the big game that will go up on Friday. If you're outside of the city of Louisville and are looking to watch the Battle for the Governor's Cup with some fellow Cards fans, shoot me an email (MikeRuth5@aol.com), leave a comment or find some other way to let me know where you're going to be setting up shop on Sunday afternoon.

As might be expected, after three consecutive years of being favored to beat Louisville, Kentucky is embracing its role as underdog heading into Sunday.

I think everybody likes being the underdog," sophomore quarterback Max Smith said. "You go out and try to prove yourself. You've got to like being an underdog and that's what we are."There seems to be no more powerful motivator in sports these days than being told you are not going to win a game. Teammates band together at the thought of being the only believers, while coaches point to doubters outside the locker room."What a great opportunity for us," head coach Joker Phillips said. "We've played a lot of top- 25 teams, come out on top on some. This is a great opportunity for us to play against a top-25 team in our first game."

Thoughts, Kentucky fans who wouldn't dream of making the trip into Louisville? 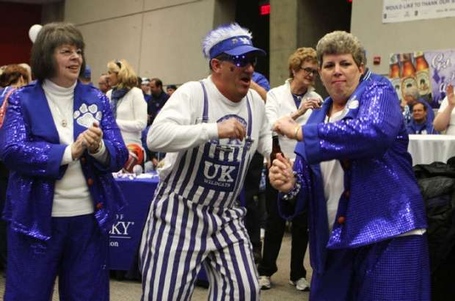 "We have enough to go be a good football team," Strong said. "The question is will we perform."

As so many things have been during this preseason when the Cardinals have moved into the Associated Press Top 25 for the first time since 2007, that theme is a departure.

For two years, Strong has definitely not had enough. Not enough depth, not enough size, not enough talent.

He's had enough to get by, mind you. But now he has enough to get on with it. To talk to Strong is to talk to a guy who knows he has the engine put together pretty close to the way he wants to have it. He's just not entirely sure how it is going to respond when he turns that key for the first time -- will it roar to life, or need some time to warm up?

Joker Phillips confirmed on Monday that running back Josh Clemons will not play on Sunday against Louisville. Either CoShik Williams or Raymond Sanders will be Kentucky's starter at tailback this weekend.

Via Cardshout.com, it would appear as though No. 16 (Johnny U?) has put on some considerable bulk and is going to be a beast for the Cards this season. 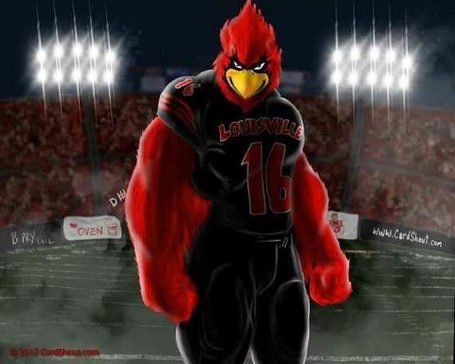 Just about every recruit who is or has ever been on Louisville's radar will be attending the U of L/UK game on Sunday. That includes Ryan White and Jason Hatcher, as well as three other players who have already committed to other schools. Here's a full list of Sunday's unofficial visitors.

Avery Williamson, "Ooo, I'd love to hit Teddy. Gotta take that shot. Let him know how physical it's going to be."

Williamson has yet to record a sack in his college career.

The Big East bloggers for SB Nation have tabbed Louisville as their clear preseason favorite. The Cards garnered all but one of the top spot votes. That one detractor was the Rutgers blog, which voted Rutgers No. 1.

While driving to Gatlinburg last Friday, Dan - of New Orleans trip non-fame - continued his lifelong tradition of saying whatever is on his mind and laid out the following hypothetical for Sunday:

"What if the team was all huddled close together at midfield before the kickoff and then they broke the huddle and Gorgui was in the middle ready to do the kickoff? I guarantee it would be the loudest the stadium has ever been. The ball could go out-of-bounds after five yards and it'd still be worth it."

He also talked a lot about how he wanted to see a bear that weekend.

With the kicking game struggling and Gorgui's soccer background, this isn't the worst idea I've ever heard.

The men's soccer team kicked off its 2012 campaign in rough fashion last Friday, falling 3-0 at No. 9 Maryland. Ken Lolla's young Cardinals will open their home season by hosting Belmont this Saturday night at 7.

A reminder that they serve alcohol at Cardinal Park this season, which makes Saturday's match the perfect way to kickoff a 20 hour tailgate.

"We will always stay the hunter," Strong said Monday. "Each week we prepare like we're always the underdog."

Strong said he told his players, "Let's make sure in this room we know exactly who we are."

Alex Kupper, one of the team's five veteran offensive linemen, suggested that the Cardinals will not look at the 2012 season as an opportunity to take bows.

"We've only scratched the surface," Kupper said of the Cards, who are overwhelming favorites to win the Big East title. "We want to go out and prove ourselves. Show everybody we mean business."

Turner Broadcasting purchasing Bleacher Report means that now an anonymous person can make a slideshow putting Louisville at third and Cincinnati at first in their rankings of Big east football stadiums, and that turns into: USA Today says Cincinnati has best Big East stadium.

Chane isn't impressed by the fact that Gorgui can speak five different languages. 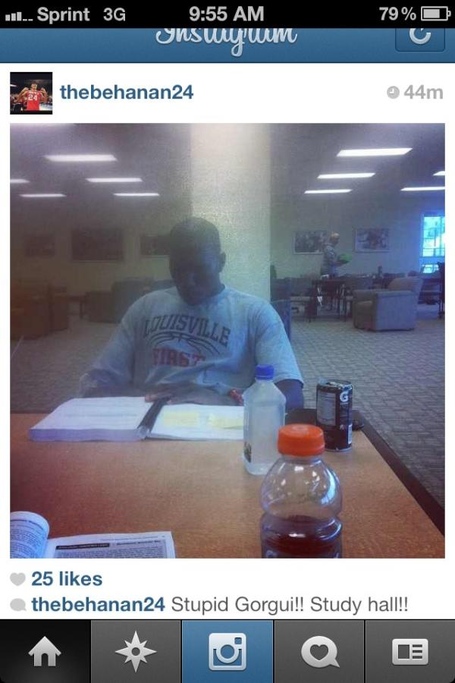 Bad news from the wild and wacky world of women's basketball recruiting, where Makayla Epps (Anthony's daughter) has decommitted from Louisville and committed to Kentucky. She joins Kyvin Goodin-Rogers (Tick's daughter), who pulled the same move earlier this month.

3 Here's a point of concern for Louisville: In last year's game, its quarterbacks completed 12 passes to seven players. Four of those players (Josh Bellamy - 4, Michaelee Harris - 2, Vic Anderson - 2 and Josh Chichester - 1) won't play against Kentucky this season. The Cardinals return only Andrell Smith, DeVante Parker and Eli Rogers, who each caught one pass against UK last season.

14 Last year's Governor's Cup included 14 punts, seven by each team. The game also included 13 penalties for 108 yards and three fumbles. It wasn't a pretty game by any measure, other than Louisville fans liking the outcome.

3 Here's an oddity from last year's game: Each of Louisville's three touchdowns were proceeded by two failed drives. Louisville started the game with a pair of three-and-out drives before a four-play, 72-yard scoring drive. The Cardinals' next two drives ended with punts before a six-play, 49-yard scoring drive. After opening the second half with a field goal, Louisville was forced to punt twice before the final touchdown put the Cardinals up 24-10.

Muhammad Ali's childhood home in West Louisville is on sale for $50,000. Seems like a steal.

In the latest depth chart, released on Monday as Kentucky makes its final preparations for No. 25 Louisville this weekend, there are 23 sophomores, redshirt freshmen or true freshmen listed as either a starter or his backup.

But Kentucky's seniors also would say that UK's a team with enough veterans to carry the Cats through some growing pains.

There were 16 seniors listed on the two-deep roster, which gives Coach Joker Phillips some comfort.

"I've been saying from day one when we first got back together, I like the leadership we have at the top," Phillips said. "Those guys at the top are starting to bring some other guys up with them."

Programming note: Mark Ennis and I will be back on the radio tonight from 7-9 on ESPN 680. Sunday's game will be worked into the dialogue.

For those interested, here is UK's current depth chart.

Rivalry week will get ratcheted up a notch when the volleyball team hosts Kentucky tomorrow night at 7 inside the Yum Center.

And finally, red shirts on, red flags up. All week.