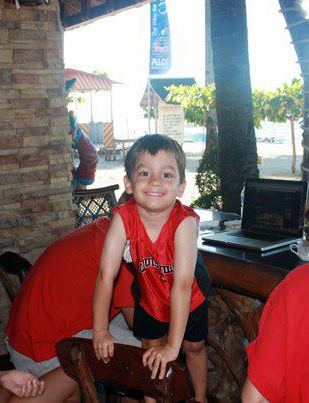 That's Joseph Dicello - who will inevitably be referred to as "Joey D" by all friends come age 13 or so - holding it down for the Cards while living in the Philippines. Apparently he's learned to love ESPN3 the way other kids his age love Tom & Jerry. Tom & Jerry are still relevant, right? Well they should be.

The Louisville women's soccer team will play its home opener against. Purdue tonight at 7 p.m. at Cardinal Park. A reminder that beer will be served at games this season.

Intellectual Barber Shop Gorgui finds your political beliefs to be shallow and pedantic. 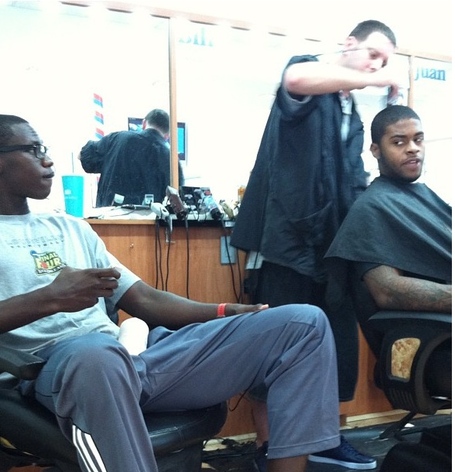 There are a lot of people talking about this Rick Pitino's Historic Opportunity piece from ESPN, but it's an insider deal so I haven't seen it. I assume the historic opportunity involves Louisville potentially winning a national championship in 2013, but outside of that there's not a whole lot of insight I can give you about the feature.

A reminder that U of L QB commit Kyle Bolin will be on ESPNU Saturday night when his Lexington Catholic squad hosts Ensworth High from out of Nashville. Kickoff is slated for 9 p.m.

Congratulations to Mario Benavides, who was named to the Senior Bowl watch list on Thursday. Benavides was the lone Cardinal to earn the honor.

On a related note, here's today's reminder that we were better off not getting Fab Melo.

The Kentucky Wildcats: still doing all their talking on the field .

Daryl Collins on UK being an underdog: "I ain't got nothing to say, for real. They'll just wait until Sept. 2 to see who the underdog is."

I have absolutely nothing to say until at least this next sentence.

For you ambitious youngsters, the Louisville Magic will be holding tryouts this weekend.

Eric Crawford says the Louisville football team has to do a better job defending its home turf this season.

"Last year, the questions were, 'Why do you guys play so much better on the road?' If I knew, I'd tell you," Benavides said. "Home field is supposed to be so much of an advantage. I think we understand that. I think what happens is maybe, for whatever reason, if you win or lose a game home or away, stats start to build up and people put a lot of stock in that, and once players start to hear that maybe they think, 'Shoot, maybe we are better on the road.' And you get that kind of mindset. So I think right now, it's not really a big concern. . .. But for me personally, that's a goal of mine. Win every game at home. Why not?"

The Cards will play seven home games for just the third time in the stadium's history. No U of L team has won more than six games in a season in Papa John's Cardinal Stadium since it opened in 1998.

U of L's home domination reached its peak under Bobby Petrino in the 2004 and '05 seasons, in which the Cards went 11-0 and won by an average margin of better than 40 points.

One thing to be noted about the Cards' home heartburn the past two seasons -- every game has been close. No loss has been by more than one score (and conversion).

"I just think about the games we have lost here, and just look at that first year," Strong said. "It's fourth and a foot and I go for it and don't get it against South Florida and we lose that one. And then the next week we lose to West Virginia. If we get that fourth and one, who knows what happens the next week.

"Then you bounce out here last season, we lose to FIU, then we lose to Marshall and get beat by Pitt. The games at home, you have to win, because it's so tough to win on the road.

The Louisville volleyball team gets its season underway this weekend with three tough matches in the Active Ankle Challenge at the Yum center. The Cards get things started tonight at 7:30 against Western Kentucky.

The field hockey team will also be in action on Friday, taking on Northeastern at 6 p.m at Trager Stadium.

The latest NBADraft.net mock draft has Gorgui Dieng going to the Atlanta Hawks with the 23rd overall pick.

Anthony Tolliver has been in the mix for some time, but the team also has interest in free agents Michael Redd, Terrence Williams and Shawne Williams. Redd has a connection with Ernie Grunfeld since Grunfeld drafted Redd, a former all-star and Olympic gold medallist, for Milwaukee in 2000. Redd averaged 8.2 points last season in Phoenix after missing most of the previous three seasons with knee ailments.

Terrence Williams averaged 8.8 points, 4.1 rebounds and 3.1 assists in 18 games with Sacramento after getting waived by Houston last season. Shawne Williams became a free agent in July after working out a buyout with Portland. He was a valued member of the New York Knicks during their playoff run two seasons ago but struggled in New Jersey before eventually getting dealt for Gerald Wallace.

The Louisville swimming team is looking to build on its recent success.

Highlights from the last eight minutes of the Florida game? Don't mind if I do.

And finally, I'm once again on the road as you're reading, heading to the final bachelor party weekend of 2012. If Russ Smith wins the Heisman between now and Sunday, you're probably going to have to read 922's take on it.