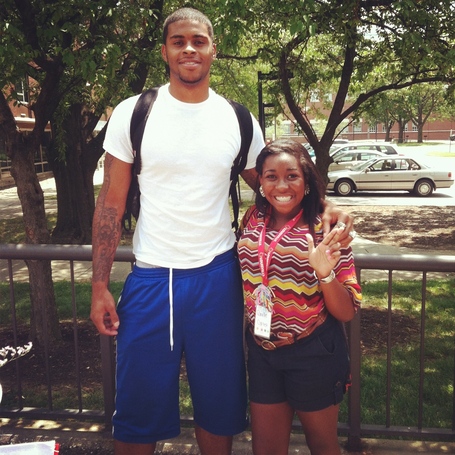 Camille is a Tennager 4 Behanan (name is a work in progress) who claims Chane is "even cuter in person."

I get "equally unimpressive in person" at least once a week, so I can kind of relate. I'm shorter though. Not as good at basketball. Probably know more about the origins of the Ninja Turtles. We'll call it a draw.

Pete Thamel guaranteed himself at least another two weeks of entertaining email by writing a feature for Sports Illustrated centered around how the NCAA is expanding its inquiry into Kentucky freshman Nerlens Noel.

A veteran compliance official with no direct connection to Noel's case called the presence of Kentucky's Bell in the meeting with the NCAA: "unusual but not incredibly unusual."

The NCAA cannot comment directly on Noel's case, but a spokesman said that, generically speaking, "the enforcement staff has discretion whether to involve institutions in off-campus interviews." The spokesman added: "The practice is discretionary and not unusual."

Noel has tweeted that he arrived in Lexington this week and is excited for the season. But it appears that the amateurism issues the NCAA has been probing the past few months will follow him there.

I really hope they'd I'll do.

Lovely bunch of kids. Just a little misunderstood, that's all.

Some bad news for Kentucky on the football front, where sophomore running back Josh Clemons is doubtful for the season-opener against the Cards after having his knee scoped earlier this week. Clemons carried 12 times for 28 yards and caught two passes for 40 yards against U of L last season.

CBS recently asked nearly 100 college basketball coaches which player they thought had the dirtiest recruitment over the past ten years. As might be expected, a handful of Lexington Basketball Academy attendees made the cut.

The question is: Which player is perceived to have the dirtiest recruitment in the last 10 years?

On Anthony Davis: "I've never seen a recruitment get shut down as quickly as that one got shut down. I don't know how they did it. But it was a strong play."

On John Wall: "Baylor hired John Wall's AAU coach and that still wasn't enough to get that deal done. That recruitment was on another level. And remember, Roy Williams basically stopped recruiting him. Best player in the country is from North Carolina, and North Carolina didn't really want anything to do with it. What does that tell you?"

On Jabari Parker: "I've never seen a kid with more desire to play in the new 18 vs.15 Big East Tournament play-in game. That being the case, DePaul has literally poured almost a decade into landing Jabari. The playing field in this recruitment could not be more uneven right now."

Cat Barber's assistant coach says that there's a good chance Barber and Troy Williams could end up at Kansas if the Jayhawks offer Williams a scholarship. Both Louisville and Alabama have extended scholarship offers to each player. Barber is set to visit U of L on the weekend of Sept. 7, a week after he goes to Lawrence.

I know this has been making its rounds recently, but it still warrants posting. 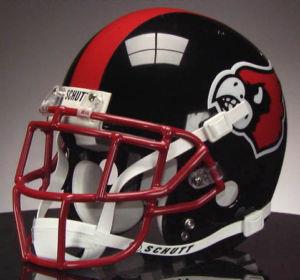 Can you imagine Matt Nakatani in that bad boy? Yeah you can.

I said, yeah you can. Look it is too early and I have too much today do to put up with this type of behavior. So you are going to sit there and you are going to imagine Matt Nakatani in that bad boy while I finish the rest of this news and notes post.

Don't you dare text your mother.

I know there are some hockey bros reading this, so here's your chance to help out with the development of the sport at Louisville.

Take it away, Phil Scott:

I'm trying to raise money for U of L Ice Hockey. They are a club team which means the university only gets them enough money to buy one or two jerseys and an hour of ice time (seriously). We run an aid station for the Ironman Triathalon on the run course. We hand out water, pretzels, chicken broth...all the essentials. But sadly we've had some of the big families that typically volunteer back out at the last second due to unforeseen circumstances. With the event being this Sunday I'm in a bit of a scramble looking for people.

I really just need people to volunteer a couple of hours some time between 4 and midnight. You'll get an ironman t-shirt, pizza and I'm going to try and get some free tickets to the games for the volunteers. Most runners are coming by our aid station (located on third street near Magnolia) between 4-8 so that's when I need the most people.

If people can e-mail me at phil.scott@gmail.com for more information it'd be great. It's a ton of fun and one of the more inspirational things I've ever done. I'm hoping the cardinal community can come through and help me get the number of volunteers I need to make this a successful event for Louisville Ice Hockey. 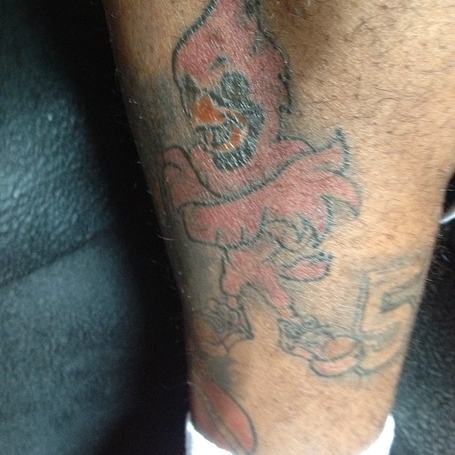 I'm pretty sure it's real.

Have heard from a couple of people that Rajon Rondo had some extremely high praise for Quentin Snider after the Louisville commit went up against the NBA All-Star and some other professionals during a run earlier this week.

As expected, Bridgewater experienced ups and downs as a freshman last season. He threw an interception in his only pass attempt in the opener against Murray State but finished the year with five touchdown tosses over the final two games. Bridgewater’s play was crucial to keeping Louisville in the Big East title hunt last season and will only get better as a sophomore. With plenty of weapons at his disposal and a talented offensive line, Bridgewater should finish 2012 ranked among the top five players in the Big East.

I don't know how many of you guys remember Raffi, but he was a children's singer who was extremely popular (uhh "Baby Beluga" anyone?) in the late '80s and early '90s. Anyway, the other night I noticed that Raffi is on Twitter and subsequently tweeted about how he deserved more followers than any Kardashian and how his Christmas album basically WAS Christmas between '87 ad '92. The result? Raffi retweeted and favorited my tweet and is now following me on Twitter.

So now that I'm best friends with Raffi I'm not really sure how much longer I'm going to be able to keep this site active. We'll probably be taking some trips together, his hefty wire transfer should be coming through any second now, and I can only assume that at some point he's going to want me to help out a little bit in the studio. I'm thinking "Pre-Pubescent Beluga" would be an interesting road to take a creative stroll down. Just an initial chuck at the wall. 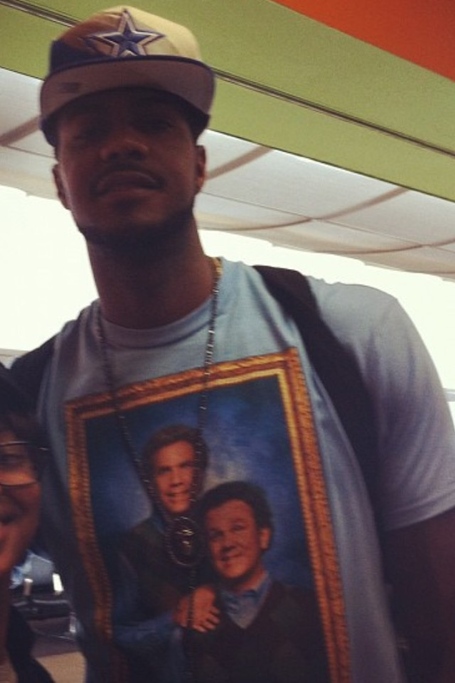 Louisville recruit James Quick tops the list of the 25 best class of 2013 football prospects in the state of Kentucky. Cardinal commit Kyle Bolin checks in at No. 5.

ESPN is holding a pledge your allegiance contest to see which college has the most loyal fans. It's essentially just another cheap ploy for traffic, but feel free to vote for U of L. Penn State is currently way out in front of the rest of the country. Because that's what will completely swing the pendulum of public perception back to the positive side.

Hakeem Smith is your Louisville representative on the 2012 Big East Media Guide cover. 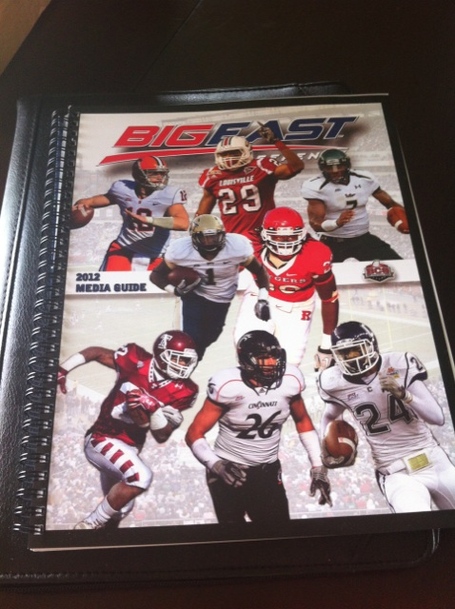 Top center and holding up No. 1. You have my approval, Big East. This makes up for one bad call in the first basketball loss to Syracuse last season. I'd prefer it if you didn't pick a block/charge call, but I'm not gonna hamstring you like that.

Bellarmine will be the host for the 2013 Division II Elite 8, which will be played on march 28 and March 30 inside Freedom Hall.

Come talk to me when you finally get that Raffi follow, boys.

DeVanter Parker and Teddy Bridgewater say the team is still focused on itself and not Kentucky just yet.

"Right now, we are in still in preseason camp," said Parker, who led the Cardinals with six touchdown receptions last year. "Over the next couple of days, we are going to start focusing on Kentucky and starting to install some plays for them."

Sophomore quarterback Teddy Bridgewater, who entered the UK game in the second quarter last year, is also ready to start the preparation for the Wildcats, but knows that time will come soon enough.

"Right now, we are still preparing," said Bridgewater. "It's still U of L versus U of L. We will start preparing for Kentucky when that time comes. We are trying to put the finishing touches on our training camp installations."

CBS notes that freshman linebacker Keith Brown has been getting first team reps in its Big East notebook.

And finally, Kentucky has 18 different potential uniform styles this season. One for every person who can name more than five players on their team.