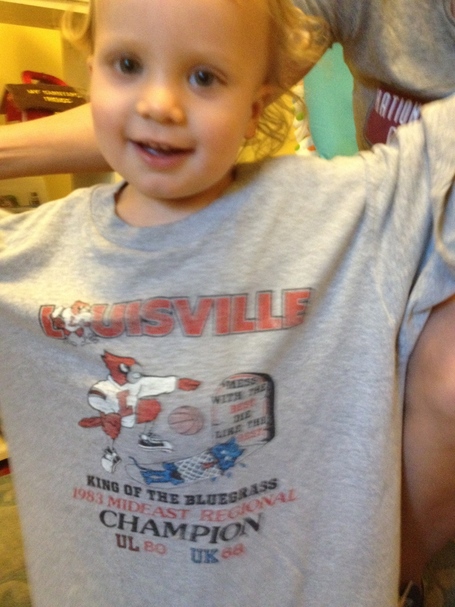 Brooks Crosby is already preparing himself for what he hopes will be a Monday of celebration two weeks from now. A little did you know: FluffyFluffyDoubleChunk actually created the design for that shirt. His skills have really developed over time.

Go ahead and mark down the weekend of Sept. 7 as a huge one for Cardinal basketball, as elite 2013 point guard Cat Barber and four-star center Marcus Lee have both announced they will be taking visits to U of L. Someone let Charlie know not to call off the dogs against Missouri State.

Yahoo's Pat Forde has Louisville 23rd in his preseason top 25.

The Cardinals were the youngest team in the nation last season, but came on as the kids grew up and finished in a three-way tie for the Big East title. Now, with sophomores all over the field and quarterback Teddy Bridgewater a star in the making, coach Charlie Strong could win the league outright in his third season.

Attention U of L students or anyone else with the ability to get to campus (read: humans): you will be able to get your picture taken with all ten of Louisville's Big East championship trophies tomorrow between 11 a.m. and 1 p.m. in the SAC across from the bookstore. This is not a trick, I'm almost sure of it.

Cardinal QB commit Kyle Bolin got his senior season off to a nice start by hitting on 17-of-31 passes for 213 yards and three touchdowns with once interception in Lexington Catholic's 21-7 win over Bell County on Friday night.

Bolin and the Knights will be on ESPNU this Saturday (Aug. 25) at 9 p.m. when they face Ensworth High School from Nashville.

Time to make some room for a new entry on the list of things we know about Dark Slime.

Louisville has made the first cut for five-star 2013 forward Jerrell Martin, who is listing UCLA, Alabama, St. John's, Oklahoma State, LSU and Texas A&M in addition to U of L.

Check out my Saturday appearance on the Weekend Spots Buzz where I discuss what my perfect day with Charlie Strong would entail. Cuddling is involved.

The women's soccer team got both their own season and the 2012-13 Cardinal athletics season off to a good start with a 2-0 win at Butler on Friday. Angelika Uremovich and Manual's own Casey Whitfield netted the goals for U of L. The Cards return to the pitch this Friday with their home-opener against Purdue at 7 p.m.

The men's soccer team will host Lipscomb tonight at 7 p.m. in its final exhibition game. Admission at Cardinal Park is free. The Cards will begin their actual season at Maryland this Sunday night at 7.

Your complete schedule of Cardinal sporting events on this first week back to school:

Speaking of this being back to school week, a few people have messaged me about additional advice for surviving the first few weeks of college, so here are three additional pointers from someone who's done it:

2) Tell people you had a recurring role as an extra on Even Stevens. Great way to turn some heads early and get some solid buzz behind your name. Follow-up tip: keep the story of your recurring role at three episodes or less. Any more than three episodes and your freshman rival will be inspired to do some snooping. Oh yeah, you're gonna have a freshman rival. It just happens. You'll know exactly what I'm talking about in a couple of weeks. Mine was a skinhead who left school in early October. That's how good I was at college.

Rick Bozich says Michael Bush is expected to be a touchdown machine for the Chicago Bears this season.

Yahoo ranks Mario Benavides as the nation's No. 20 interior lineman.

Particulars: 6-4/280, Sr.; Los Fresnos (Texas) High
Buzz: He will be a four-year starter for the Cardinals. In his first three seasons, Benavides has made it through just one (his redshirt freshman season in 2009) unscathed. He missed one game in 2010 and missed the first three games last season. He also missed spring drills, but is 100 percent and should be the best lineman in the Big East.

An interesting look at how Louisville and Kentucky monitor their athletes' social media usage. Also, that illustration? Really?

Someone writing these words for you has a birthday coming up... 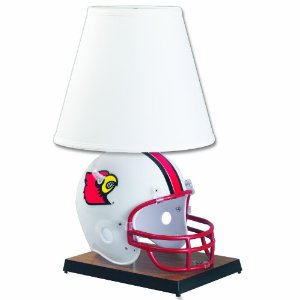 Go for it. Seriously, your wife/girlfriend/significant male other who hates Louisville (what are you doing, by the way?) will live with it...or pull an A Christmas Story move.

Youuu used up all the glue...on purpose!

The baseball Cards are back on campus after some productive summers all over the country.

Congrats to former Card Cameron Graham, who found the endzone for the Tennessee Titans on Friday.

And finally, the C-J takes a look at how Charlie Strong and his team reacted to the news that they will begin the 2012 season with a national ranking.