ESPN: Louisville Exists, But Not As Much As Duke

Share All sharing options for: ESPN: Louisville Exists, But Not As Much As Duke

Louisville will be the top seed at November's Battle 4 Atlantis and, barring a stunning early upset, should be the highest-ranked team of the eight in the field.

You would think this would give the Cardinals top billing in terms of headlines for stories on today's release of the tournament bracket, but ESPN chose to go in a different direction for its re-publishing of the AP's Battle 4 Atlantis story. 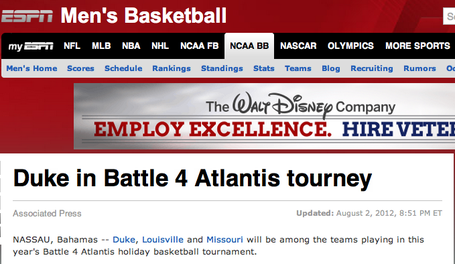 Although I suppose it's unfair to solely rip on the world wide leader, seeing as how SI went with "Duke Among 8 Teams In Battle 4 Atlantis."

That's fine. We'll do our talking in the Bahamas, just like we have for the past 12 months. The Real Deal Shockers found out the hard way.