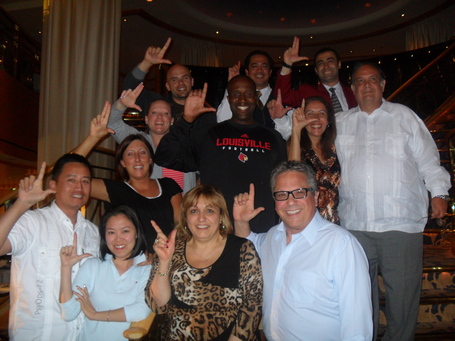 They said it wouldn't last, we had to prove 'em wrong, 'cause I learned in the past, that love would never do without Gunnery Sergeant Wesley Key, wife, friends, waiters and head manager aboard this European Carnival Cruise.

Janet's original lyrics. She fought tooth and nail against the producers who said it wasn't smooth enough, but ultimately lost. Sometimes you have to sacrifice creative individuality for a career that puts food on the table.

College football's preseason AP Poll will be released this morning at 10 a.m. Several AP writers have already posted their ballots and have included Louisville, so I think the Cards have more of a shot at being ranked than they did in the coaches' poll.

One such writer is the Tampa Bay Times' Greg Auman, who Louisville slotted at No. 21.

Sports Illustrated has a great Cardinal preview piece which focuses on Teddy Bridgewater.

Teddy Bridgewater's Louisville career got off to an inauspicious start. It was Sept. 1, 2011, the Cardinals' season-opener against Murray State. Louisville led 21-0 in the second quarter, and Bridgewater settled under center for his first Division I snap. Coach Charlie Strong wanted to see what his prized recruit had to offer.

Bridgewater's sequence didn't go as planned. Following a 22-yard carry by running back Victor Anderson, Louisville was whistled for three consecutive penalties: two false starts and a delay of game. On third-and-17, Bridgewater attempted his first pass. He drifted into the pocket, lofted a lazy ball downfield and watched as Racers' cornerback Darrell Davis hauled in an easy interception.

Bridgewater's first collegiate line: 0-for-1, one interception, a QB rating of -200.

"It was the most humbling experience ever," Bridgewater said. "You come into a game as a freshman thinking you can throw it around the ballpark. But reality sets in and it just brought me back down to earth."

The U of L Alumni Association has a limited number of tickets available for each of the Cardinal home football games. Each ticket comes with $5 in Alumni Bucks for tailgate food and refreshments, which is nice.

This guy's ready for the season: 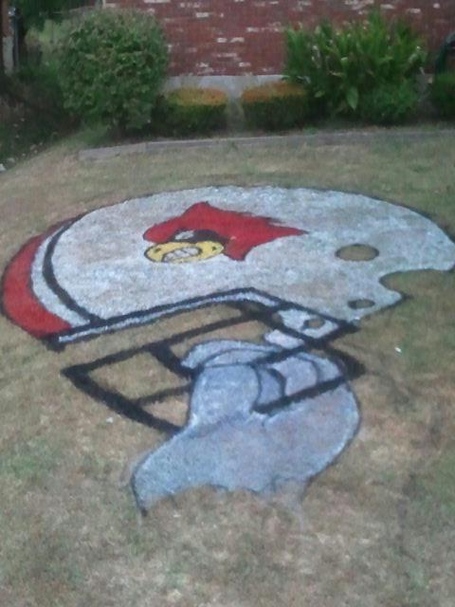 Former Louisville signee Brandon Snell has landed at FCS Southeastern Louisiana, and is already making quite an impact during fall camp. Snell did not qualify to play at U of L this season.

Anne Kordes and the Louisville volleyball team have been named preseason favorites in the Big East.

The powers that be within the Cardinal field hockey program (they're both lovely and intimidating) have asked me to pass along word that beer will also be served at all home field hockey games this season. Thus, giving me the perfect opportunity to drunkenly resurrect my "whack it!" cheer which has been accumulating dust in my sports cheers closet since high school.

Congratulations to our friend Eric Wood, who made his return to the gridiron Friday night in Buffalo's preseason game against Minnesota. Wood played ten snaps for the Bills in his first live action since tearing his ACL last season.

A great preview of Louisville's cornerbacks from Mark Blankenbaker of Cards and Cats.

The U of L women's basketball team will be on Big Monday for the second straight year when they play at Notre Dame on Feb. 11 at 9 p.m. on ESPN2.

An artist's rendition of U of L's new soccer stadium. 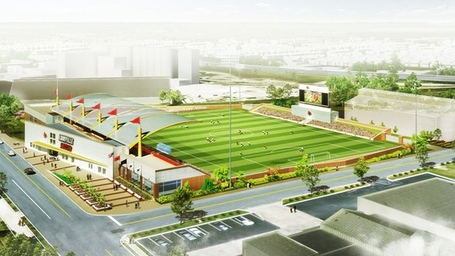 Congrats to Rick Pitino, whose horse Koko Loca was a winner at Del Mar on Thursday. The 3-year-old filly is trained Doug O'Neill of I'll Have Another fame.

College Football News lists Louisville as one of college football's programs on the rise.

It's only the second season under Charlie Strong, but he appears ready to turn Louisville into a powerhouse again. John L. Smith and Bobby Petrino each did wonders with the program before moving on, and Strong is on the right track with 15 returning starters including eight on a defense that finished 10th in the nation against the run and was second in the Big East in both scoring and total D.

The offense might have to come up with far more pop after averaging a mere 21.9 points and 333 yards per game, but that should come with the expected growth of superstar quarterback prospect, Teddy Bridgewater working behind a line that gets four starters back. Of the six losses last year, five were by a touchdown or less, and now with so much experience returning and Strong and the coaching staff coming into their own, the results should be fantastic for the next several seasons.

Central Florida continues to exemplify sucking, this time by punishing a student for having an idea and then completely ripping off said idea.

Thanks to all those who have sent me this. 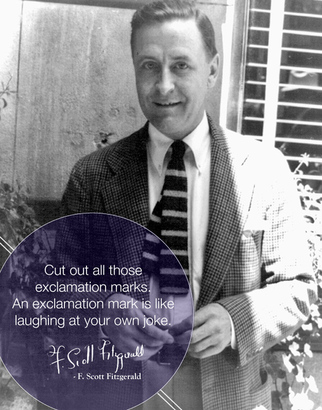 A quick reminder that I'll be on The Weekend Sports Buzz at 10:15 this morning. You can watch the broadcast right here.

And finally, our blurb about Louisville selling more season tickets than Florida State spent most of Friday as the top story on Reddit's college football page. The comments are worth checking out.