Share All sharing options for: Beer To Be Sold At All U of L Home Soccer Games

Perhaps the bigger news for U of L fans (and credit the soccer folks for knowing their audience and posting this FanShot) is that beer will be served at Cardinal Park this season during all men's and women's home matches. So, yeah, if you've been "too busy" to catch the soccer teams in action up to this point, maybe this is the year some free time opens up on your schedule.

On a relevant note, soccer season ticket packages are still available, and complete with a free Cardinal soccer scarf. Tickets for all 19 men's and women's home matches are just $50 per person or $125 for a family pack of four. 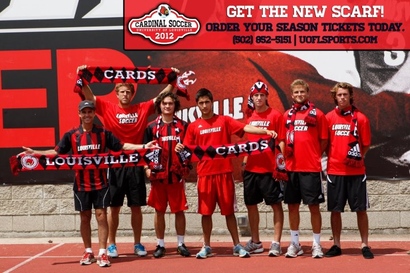 Also, check out the first installment of "Shakin' it up with Salt 'n Peppa" featuring Cardinal futballers Paolo DelPiccolo and Andrew Farrell.