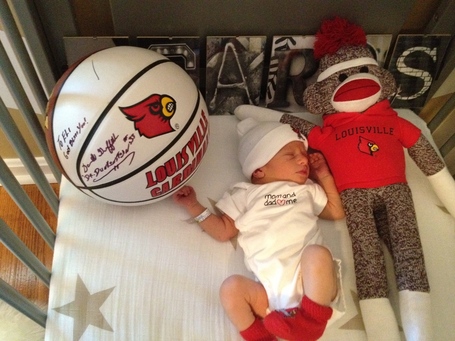 Eli Klapheke on his first day home from the hospital with a solid crib shrine highlighted by an autographed basketball from Mr. Darrell Griffith himself.

Sort of puts my "It's a Boy" Kermit the frog balloon from '84 to shame. And now I hate my parents.

My eyes had been closed for 27 years. Thank you for opening them, Eli.

There's only one way to start today's news and notes, and that's by mentioning the passing of famed local philanthropist Owsley Brown-Frazier. Frazier raised and gave away more than $500 million over the course of his life, a chunk of that going to support the University of Louisville and Cardinal athletics.

I never met him and know few people who did, but that doesn't change the fact that he was a Cardinal fan worth celebrating. My thoughts are with his family and everyone else who knew and loved him.

The 2012-13 U of L sports season gets underway tonight when the women's soccer team plays at Butler. The Cards, coming off the first Sweet 16 appearance in program history last season, won both of their preseason exhibition games.

Louisville sports are back.

CBS says Cardinal fans should be getting ready for a return trip to New Orleans because the football team will be playing Alabama in the Sugar Bowl on Jan. 2.

It's a reasonable projection for the Cardinals, the preseason favorite to win the conference. Louisville is rated ahead of North Carolina (No. 29) and Washington (No. 30), but behind Notre Dame (No. 27). A matchup against the Crimson Tide in New Orleans could bolster the program's recruiting significantly. The Cardinals would face an Alabama rushing attack that features power runner Eddie Lacy and several potential NFL linemen. Louisville returns six starters from a run defense that ranked third in the Big East last season.

That would be most satisfactory.

As expected, five-star point guard Tyler Ennis committed to Syracuse on Thursday night. What wasn't expected was that he did so via a YouTube video posted on his AAU team's website.

I fully expect "in my day, the craziest way anyone committed was by shaving a school logo into their head" to be said with complete seriousness in no more than 20 years.

U of L will be holding its final two-a-day (great show, wonder what Repete's up to) session on Friday as the Cards prepare for their second scrimmage of camp on Saturday morning.

The offense, which will be directed by Teddy Bridgewater and Will Stein, looks to build upon the success they had in the first encounter. The offense was able to create big plays in the passing game and also showed a toughness to run the football.

Head coach Charlie Strong pointed out after the first scrimmage that the offense was clearly ahead of the defense, and Watson points to the development of the offensive line for a part of the offense's success.

"They have played very well in camp," said Watson of the offensive line." They have great communication and are on the same page. They are pretty cohesive group, where a year ago they were a talented group, but working toward the communication and the cohesiveness, which the line has to have. They have all played together for a year. They have been in spring ball together and in camp together. You feel them on the field and you hear their communication. You feel their thump when we are running the football."

If the fact that we are entering the next-to-last weekend without Cardinal football weren't exciting enough, how about the realization that exactly two months from today is midnight madness? A wave of glory is about to sweep over all of us.

A lot of people are sleeping on Jeremy Wright after his somewhat disappointing - and injury-riddled - sophomore campaign. Wright spoke with C.L. Brown this morning about this being a redemption season for him.

I would not be the least bit surprised if Jeremy has a much bigger season than anyone anywhere is predicting right now.

ESPN's Matt Fortuna says that Louisville is the Big East team most likely of ending the SEC's reign at the top of college football.

The Big East school with the best chance of dethroning the SEC from the top of the college football world is the one that gets the first shot at the sport's best conference.

OK, so a Louisville season-opening win over Kentucky wouldn't exactly silence the chants of "S-E-C!" that have been coming from down South the past six years. But the Cardinals enter 2012 as the Big East favorite and coach Charlie Strong knows that the cream will have to rise to the top if the conference wants to effect change.

"What's going to be critical now, for this league to really become what it needs to become, we need to play better football," Strong said. "It needs to be where somebody can step up and have a good year or maybe one or two teams. We need to become a league where there are two or three teams people are talking about every year."

At least a few of you reading this are about to spend your last weekend at home before heading off to college, maybe at U of L, maybe somewhere else. A few more of you are about to head back for your second, third or eighth fall semesters as undergraduates.

I've been there, and I know exactly how tired you are of everyone trying to give you advice by this point. Still, I'm going to join the masses and give you the best bit of college guidance I can think of...

Don't be that person who jumps into the baby pool.

It sounds simple enough to avoid, but trust me, there's going to be a point in late August or early September where you've had four or five and all the sudden you're thinking, "belly flopping into that baby pool would be the funniest thing any of these people in this yard have ever seen in their lives." It won't be. The best case scenario is that you get a handful of pity laughs and only a quarter of the people who witnessed the move end up hating you forever.

The main problem with the baby pool belly flop is that it's been done more times than the Aristocrats joke, and there's about 100% less wiggle room for creativity. People have seen it already, and they found it pretty annoying the first time.

Plus, that's someone's baby pool. Even if you don't break it, someone put in the time to fill that puppy up. It might not seem like a big deal, but that's as hard as about 75% of college students are going to work on any given day.

Other than that, have fun, be nice to people, don't do anything incredibly stupid until at least late Sept. (first impressions really do last four years) and remember that Uncle Mike is always here if you need anything other than money. I don't have that much money. Plus we don't even really know each other.

It's never safe to get some shuteye during fall camp if George Durant is around. 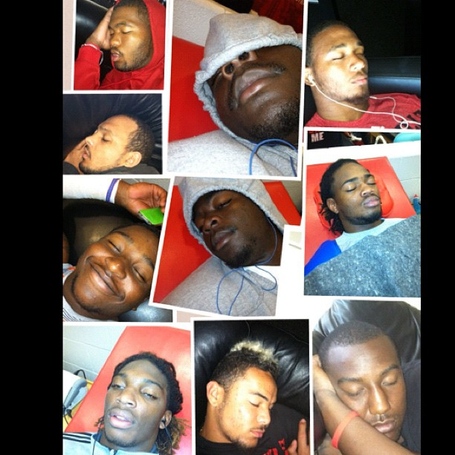 It's awful to write about taking a stand and then predict a nine-win season for Charlie Strong's team. But nine wins is the sensible call.

When Strong addressed the media last week, he sounded like a coach who loved his team. He should adore his team. His two leading concerns were a fourth tight end and the kicking game. Strong has stuffed his roster with talent and depth. The competition for playing time is legitimate. That's how teams improve.

So why only nine?

Louisville was formidable (5-2) in the Big East last season, but beatable (2-4) outside the league. One win came against Murray State, an FCS program. The other was UK. The Cards have a 15-day September stretch when they play North Carolina, FIU and Southern Miss, getting only the Tar Heels at home. That's the defining stretch of the season. Credibility points must come outside the league.

For all the optimism surrounding the Cards, remember that Louisville ranked last in the Big East in scoring in 2011 and finished in the bottom half of the league in total offense, rushing offense and passing offense. The offense should be improved, but it has to be improved.

Make it 9-3, still a 50 percent jump in regular-season wins.

The Postgame tackles the myth that is the SEC's complete dominance over the rest of the college football world.

Eric Crawford continues to churn out the hotness with an extremely informative look at the Louisville offense.

The quarterback has a lot to take in, but if a fundamentally skilled QB can get a good grasp of the offense, it is very much a passer friendly system. U of L sophomore Teddy Bridgewater says that's been his experience, not only with the reads he needs to make, but with some downfield passing that Watson has worked into the attack.

"I love it," Bridgewater said. "It allows us to play faster. Coach Wats has put in a lot of stuff we didn't have last year. I think you'll see a lot more completions, and a lot more down the field."

In skeleton drills in the season's first two practices, which were open to the public and media, U of L not only had video cameras at all the usual elevated stations, but had a videographer right in the middle of the play, shooting forward down the field with a wide-angle lens, seeing exactly what the quarterback would see. It allows coaches to get a view of what the QB is looking at, and to evaluate the rather precise routes required of receivers.

The whole thing is really a must-read for anyone wanting a gain a better understanding of what the Cards will be looking to do and how they're going to do it when they have the ball this season.

Despite being Kragged so hard none of us could walk for three years, Louisville has still produced a better overall record over the past decade than Notre Dame. The Fighting Irish are 71-53 over the past ten seasons, while the Cards are 77-48.

Offensive coordinator Shawn Watson talks about what he will be looking for during tomorrow morning's scrimmage (video).

ESPN's Andrea Adelson looks at how Clemson tansfer Bryce McNeal will help the Cardinals this season.

Receivers coach Ron Dugans told reporters Wednesday, "Just going through drills, you can tell that he has some ability. He has quick feet and good hands. We have to get him out there more and see what he can do. It takes a awhile to learn the system. Every guy doesn't learn the same. With some guys you get on the board and show them and other guys you can show them video."

He was then asked if McNeal can replace the production of Harris.

"We have to see how quickly he can develop," Dugans said. "Michaelee did some really good things for us. Bryce needs to get in shape. He needs to get out there and compete."

There's certainly no question that McNeal will help the Cards on the a capella front.

Welcome to Louisville, Bryce. We don't miss this kind of stuff very often.

And finally, for those of you who didn't quite get your full fix this week, I'll be on the Weekend Sports Buzz tomorrow morning at 10:15 to talk Cardinal sports and other complete nonsense. You can listen live on 1450 AM or watch the broadcast right here.