Wearing the hell out of perfectly fitting dark suit, Charlie Strong addressed a packed house at the Marriott Downtown during the 2012 U of L Football Kick-Off Luncheon on Thursday.

Injured wide receiver Michaelee Harris got things started with a prayer (via U of L football). 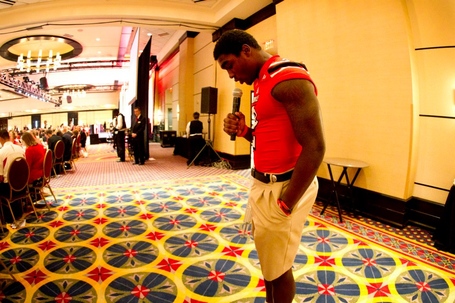 And then Strong started in with his annual address.

--The Marriott really stepped up its game in the meal department this year. The meals the first two years weren't that good because no one thought the team was going to be very good.

--Last year's team could have easily quit when they were 2-4. They held a team meeting where everybody spoke. In that meeting, Michaelee Harris said something to a senior that didn't make the senior very happy. In fact a lot of people weren't very happy with some of the things said. Then the team came out and beat Rutgers that Friday and turned the season around.

--This team is in a great position to succeed, but the biggest issues are leadership and a quirky schedule.

--There's a lot of hype out there, but this team has to avoid that talk and stay consistent. Consistency is something this program hasn't had over the past two years.

--"If you're not willing to give back, you're never going to be successful."

--We've lost one coach in three seasons, which means this staff has one collective voice. We're all in this together.

--Will Stein is still pushing Teddy, and that's great.

--The wide receivers have really stepped up in fall camp. The move of Charles Gaines back to offense has been great for everyone, except Vance Bedford who still wants him to play corner. No one wants to miss a practice anymore because the competition is so tight that one missed practice might mean you listen your position.

--Corvin Lamb is currently sidelined with a wrist injury.

--Everyone's going to love Brandon Radcliff. He will do anything and say anything.

--Brandon Dunn is really stepping up and emerging as a leader on defense. He also loves that he's wearing No. 92.

--George Durant is a utility guy, he can play anywhere.

--Everyone thinks freshman punter Josh Appleby is a linebacker.

--If the coaching staff doesn't get complacent and continues to go to work every single day, then the players will follow suit.

--Thanks the crowd for coming out and remarks that it's really important for the players to know that they're going to have incredible support from the fans. Now all they have to worry about it going to work, and they're definitely going to do that.