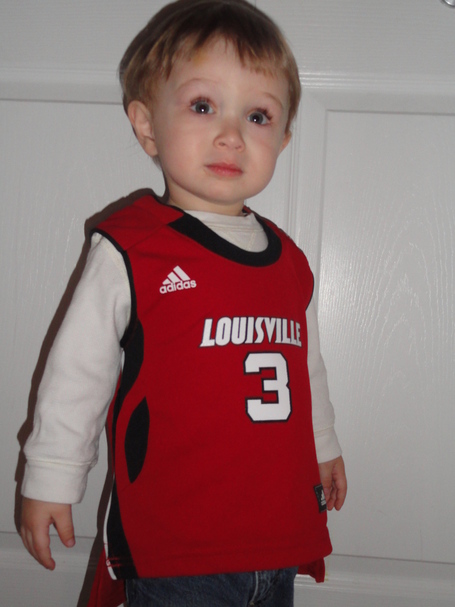 That's proud Preschooler 4 Peyton Matteo Lambert holding it down for the Cards in Vienna, Va.

According to his dad, Brandon, Matteo's favorite phrase is "go Siva!" Followed closely by, "I really hope Russ develops a consistent outside shot so that opposing defenses will be forced to respect it and he can be even more productive throughout his junior season than he was during his surprising sophomore campaign."

An interview with Charlie Strong will be shown on today's episode of "College Football Live." The show begins at 3:30 p.m. on ESPN. You can also catch a replay at 11 p.m. on ESPNU.

According to Jerry Meyer of 247 Sports, elite 2013 point guard Tyler Ennis will choose between Syracuse, Louisville, UCLA, Memphis and Illinois on Thursday night. Jim Boeheim has long been considered the favorite to land Ennis, and the fact that he is making this decision without having visited U of L wouldn't seem to bode well for the Cards' chances.

C.L. Brown writes that the pressure is on Adrian Bushell to step up and be Louisville's shutdown corner this season.

"Yeah, it's pressure, but I feel like I can live up to it," Bushell said. "Just playing with the technique that Coach Bedford teaches me, he's one of the best corner coaches in the league, so if I do what he says, the sky's the limit."

Bedford said he needs to bring his big-play capabilities to cornerback, a challenge that Bushell readily embraces. The way he sees it, he doesn't have to knock down the most passes or pick off the most passes. Sometimes being dependable just has to do with making the simple play.

"I just feel like everybody is counting on me, so I don't want to let anybody down," Bushell said. "I can't get beat deep. I have to keep everything in front of me."

So West Virginia is one of five teams featured on the regional covers of Sports Illustrated's 2012 college football preview edition.

Did we play hose guys last year? How'd that go? What happened to J.D. McCoy after his sophomore season at Dillon?

The website PredictionMahine.com has simulated the upcoming college football season 50,000 times and says the most likely result for Louisville is a Big East championship and a 24-14 loss to Florida State in the Orange Bowl.

I was bribed to post this picture of Churchill Downs' Shannon Fischer and friend with Peyton Siva on the site: 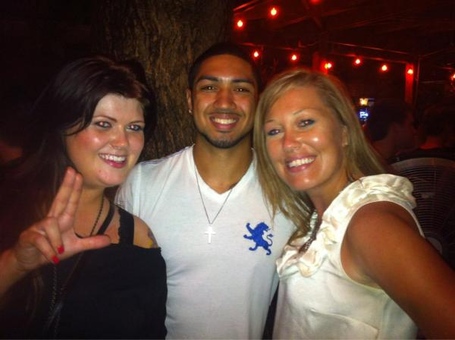 The important thing to take away from this is that I can 100% be bribed.

It's the second straight year that Louisville opponent North Carolina will be walking into a season facing significant off-the-field issues. The New York Times takes an in-depth look at UNC's troubles.

Another great story Cardinal walk-on Griffin Uhl, who continues to make his case for being one of the more intriguing players to ever suit up at U of L.

Griffin Uhl's strength is consistent with a top college prospect. But what about his understanding of a game that requires comprehension of a playbook thicker than some of the textbooks he will see in his first year of college? Linda Uhl said he's been settling in nicely.

"He's talked to upperclassmen and they've helped him to understand some of the things he wasn't accustomed to. But he's, from what I understand, he's picking it up," Linda Uhl said. "The drills and everything that we've watched him do, there's no way that I think anybody would look at him and say that he hasn't played just as long as everybody else that's a freshman out there."

"He is always willing to learn and plays with such high energy," Hurtt said. "Furthermore, the players on the defensive line love him and think he is a special person."

The time has come to start thinking about apparel for the upcoming season. I like to go on a mini-shopping spree about two weeks or a week and-a-half before the first football game to have myself more or less set up for the entire upcoming season (basketball included).

The big debate right now is whether or not I have it in me to make the transition into gameday polo guy. I attempted it at the Marshall game last year. The result? My friends hated it, we lost, and I ended up in an argument with a fellow fan which culminated with me making a comment about his acne.

I wasn't ready to be a polo guy.

That said, I'm going to be 28 in less than two weeks, which means the dawning of the polo period for many a college sports fanatic. I don't like the polo as an option for the mild days/evenings of late September and early October, but for the first couple of games of the season, I don't know, I think there might be polo potential there. I'll probably wait until my birthday to see if some sort of transformation takes place. I'm also struggling with the issue of whether or not I could pull off a visor. Leaning towards no, but not ruling out.

Of course everything I do essentially boils down to me killing time until I get to be home basketball game sweater vest old man. If those aren't the best days of my life, then the entire period before will have been for nothing.

The Louisville field hockey team is the preseason pick to finish third in the Big East this season.

Joker Phillips plays bass guitar and appears in the music video for what is without question the worst song I've heard this year.

It's the smoothest, most over-produced cotton candy country song you can imagine, but makes sure to hit EVERY SINGLE country note it could, in the most singularly disingenuous way possible.

- THINGS AIN'T THE WAY THEY USED TA BE

CATS! WE WANT 9! I DON'T KNOW WHAT A LINEBACKER IS!

The C-J lists the top 50 high school football players in Kentucky (in no order). 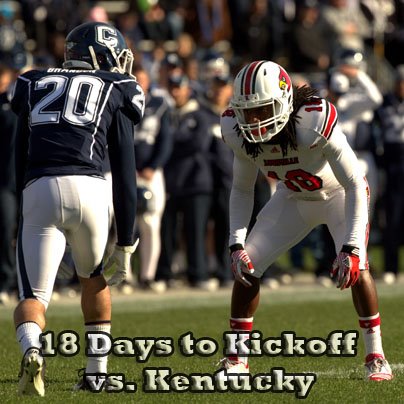 And finally, a very happy 29th birthday to Mr. Larry O'Bannon, still a fixture on many a Cardinal fan's favorite all-time players list.