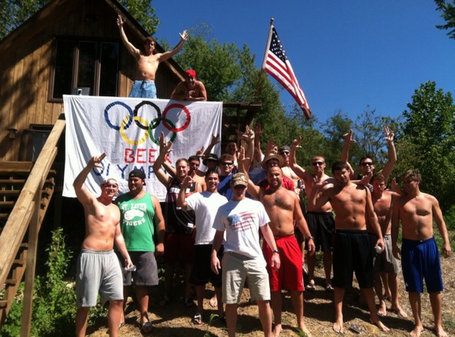 Hacksaw Jim Duggan is overwhelmed by the amount of America going on in this picture.

Go Cards. Go USA. Go delicate decision on whether or not to wear a shirt for a group photo which may or may not resurface on the Internet.

CBS lists 25 things to watch for during the upcoming college football season, and lists Louisville as the sport's top rising program and predicts that the Cards will win the Big East and face Clemson in the Orange Bowl.

The Louisville women's basketball team will take on arch-rival Kentucky on Dec. 2 inside the KFC Yum Center. This according to UK's schedule, which was released on Tuesday.

Gambling website Bovada now has Louisville as a 2/1 favorite to win the Big East in football this season.

Here are their full odds for the conference:

The Courier-Journal has hired Steve Jones away from CatsIllustrated.com to be their new recruiting guru. Steve's a highly respected guy who worked at the C-J as a copy editor from 2006-2010, but this is another hire that figures to not rub the U of L fan base particularly well.

One of the most interesting battles of fall camp is at tight end, where word is that both true freshman Hunter Bowles and JuCo transfer Ryan Hubbell are getting an opportunity to play right away. Also of note is that senior and presumed starter Nate Nord returned to practice on Monday morning.

U of L continued camp on Tuesday with a morning session where wideouts Eli Rogers and Damian Copeland were reportedly among the standouts.

Pretty cool photo of U of L soccer coach Ken Lolla's book Finding Your Gifts being presented to some excited recipients. 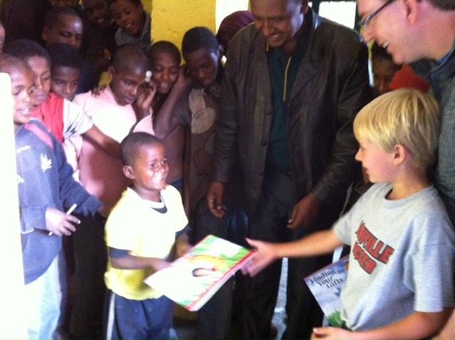 Andrea Adelson of ESPN says that the Big East "won the day" with its hire of Mike Aresco.

Bill Connelly, whose preseason college football previews are as good as anyone's in the country, says the Kentucky football program will likely continue to lose ground in 2012.

It takes quite a few if's to make Kentucky good in 2012, and the schedule doesn't help. The Wildcats will need a serious boost from either last year's bit players or this year's star recruits, and counting on that is typically a good way to lose a lot of games.

Joker Phillips is an easy coach to root for -- he was a star at UK in the early-1980s and worked his way through the coaching ranks for 20 years (from Kentucky, to Cincinnati, to Minnesota, to Notre Dame, to South Carolina, back to Kentucky) before finally getting a shot to guide his alma mater -- but his program's momentum has fizzled, and while he did bring in some interesting pieces in the last couple of recruiting classes, most of the SEC has brought in more. That usually isn't a good sign when it comes to the length of a coaching tenure.

Some potentially big news from the world of basketball recruiting, where TheWolfPacker.com is reporting that highly coveted 2013 point guard Anthony "Cat" Barber will be visiting NC State between Sept. 1-3, and that his next stop after that will be Louisville.
"The Barber of Da Ville." I'm telling you, Cat, coming to U of L would mean big things for all of us.

I visited the Courier-Journal's Facebook page today and, uh, well... 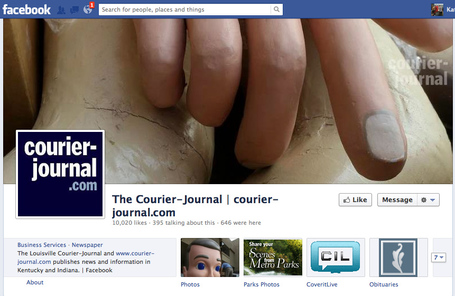 If we still had only seven people reading the site instead of 16 then I could make a joke, but this has become a situation which can produce no good.

Class of 2014 star Trevon Bluiett officially has an offer from Rick Pitino.

To those who like to rip on Louisville football fans, U of L has currently sold 3,000 more season tickets for 2012 than a Florida State team which is starting the season ranked in the top ten.

"Yeah, but that's just because y'all tailgate and sell beer at the games."

Your mom just tailgates and sells beer at the games. And she's a prostitute.

Brian Snow of Scout.com talks about Q in a feature discussing the best point guards in the class of 2014.

Along with the group from the West, Joel Berry from Florida and Quentin Snider from Kentucky are two guys who have opened a lot of eyes. Berry was dominant in July and is an absolutely bull going to the rim. Good speed allows him to get places on the floor along with a great ability to change gears and get defenders on their heels. Also he is a good shooter and excellent at finishing through traffic around the rim.

Snider is the lone committed prospect in the top tier, he is headed to Louisville, and is probably the best pure shooter of the bunch. He is absolutely a knockdown marksman when his feet are set. Also he is a good passer and a more than willing defender who has fairly quick feet and very long arms.

Louisville's Nov. 29 tilt at Rutgers is labeled by Athlon as the Big East's top must-see game of 2012.

1. Week 14 (Nov. 29): Louisville at Rutgers
The Cards are the prohibitive favorite and the 16-14 win over Rutgers last fall signaled a big turning point in Louisville's season. After a 2-4 start, the Cards out-lasted the top defense in the league before winning four of their next five games to end 2011. This year, on the final week of regular-season play, the Big East crown could be hanging in the balance. On paper, this road game should be the Cardinals' toughest league test and a third straight win over the Knights, a team that could be a top Big East contender, would likely produce Charlie Strong's first trip to a BCS Bowl

The Cards appear on the must-see list (which includes 20 games) eight times.

2012 Cardinal opponent North Carolina might be in even more trouble than previously thought.

Trinity running back Dalyn Dawkins - the son of former Cardinal standout Ralph Dawkins - is one of the latest players in the Midwest to be upgraded to four-star status.

Dalyn Dawkins - uncommitted
Running Back - Louisville Trinity (Ky.) Dawkins is a lightning bolt. He's quick, explosive, runs hard and can catch the ball out of the backfield. He also breaks arm tackles for a kid who isn't real big. I think he's going to be a dangerous guy for any spread team to have and I love the kid's ability to make plays.

In news that can only be blamed on Ralph Willard or Rick Pitino, Cardinal wide receiver Scott Radcliff has been sidelined this week because of a strained MCL. He's expected back on the practice field relatively soon.

And finally, WDRB asks whether or Dominique Brown can become the next Michael Bush for Louisville.