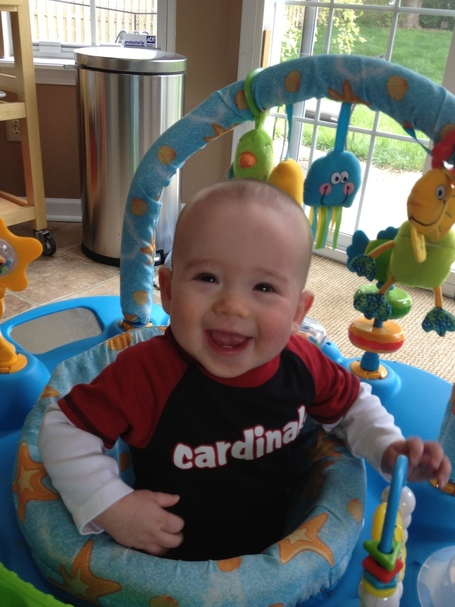 We are now officially under three weeks away from the start of the 2012 Louisville football season, and Jack Landrum could not be more excited.

I'd feel the same way if I could have an adult version of that plaything. I'd have a TV in front of me, my lap top on the right, drink and snacks in that compartment behind me, and then those same hanging stuffed animals to the left because I think they'd be loyal and fun companions for all the wacky adventures we'd have together.

First and foremost, a major congratulations to Angel McCoughtry on helping bring home the gold for Team USA.

Despite coming off the bench, Angel finished the tournament as Team USA's second-leading scorer. She continues to be one of the best ambassadors for U of L in any sport.

It's rare for a Louisville football player to hit the field inside PJCS before Cardinal fans have had a chance to lay eyes on him, but that will be the case this season with Clemson wide receiver transfer Bryce McNeal.

McNeal went straight to U of L from his graduation at Clemson on Friday, and hit the practice field for the first time as a Cardinal on Monday. He's eligible to play right away for Shawn Watson and company.

When I was in Chicago for my friend's wedding a few weeks ago, we discussed the potential glory of running into Jared Swopshire and getting him to climb aboard the wedding party limo. We also asked a restaurant hostess if her place was "the type of restaurant where Wayne Blackshear likes to eat."

Well Andrew Frey had similar dreams during his bachelor party in the Windy City, only his came true. 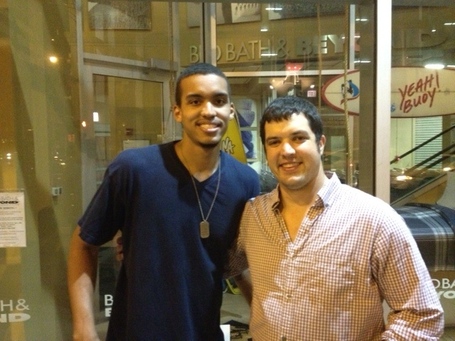 Swopcago is lovely this time of year.

The Louisville soccer team got its 2012 season underway over the weekend (sort of) with a shootout victory over UAB in an exhibition match. Preseason Big East Defensive Player of the Year Andrew Farrell netted the final goal to secure the victory.

The "L1C4" song by my future group mates Stille and Clutch of Nappy Roots and Bryan Fox is now available for purchase (there's also a short preview of the song). U of L will be using the song to promote football season.

It was very cool to see C.L. Brown's profile of Hakeem Smith getting a nice spread in this morning's edition of USA Today. 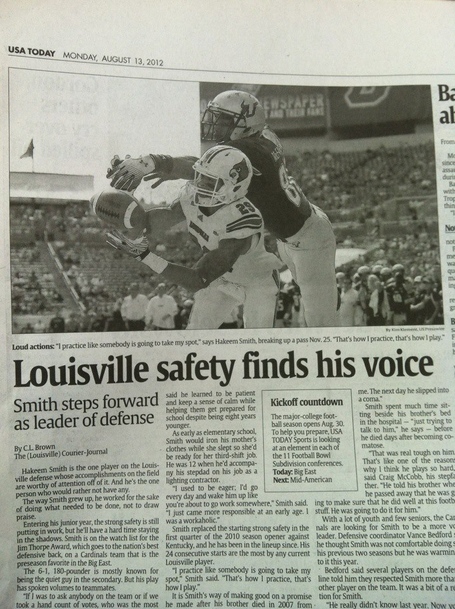 Also worth checking out is Brown's recap of Monday's practice, which focuses in on the defensive line.

Earl Clark is officially a Los Angeles Laker. Very happy for Earl that he's going to have a chance to be in the national spotlight and win a ring.

Keep holdin' it down, one eight.

For those making the trip, the U of L section during the Florida International game will be this area just above the FIU banner in the corner of the endzone. 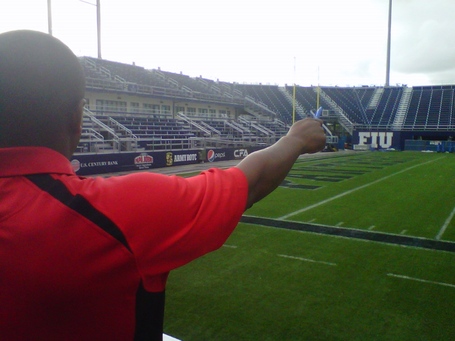 The U of L alumni group in South Florida will also be organizing a couple of get-togethers during game week for Cards fans both in the area and making the trip down. We'll have all the details at a later date.

Gaming Today has the over/under on U of L football wins this season set at eight. I would place a large sum of money on the over if this were offered anywhere legit.

Peyton Siva showed up at U of L football fan day to get Titus Teague's autograph and made a statement with his shirt choice. 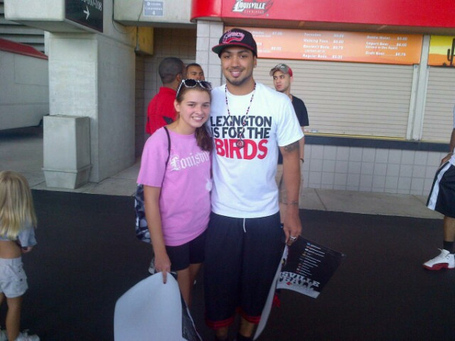 It's crazy how something as simple as a change in temperature can spark feelings of a season you wouldn't be able to otherwise drum up. When I walked outside this morning and was surprised by how cool was, my brain instantly brought up images of tailgating and U of L football.

We really are getting that close, folks.

The U of L women's soccer team, which is poised to have a big year, opened its exhibition season with a 3-1 win over Wright State.

The people who do the marketing for the U of L volleyball team deserve a raise, because this is the second straight year their season ticket commercial has been extremely bad ass.

Kansas is the latest school to get involved with Cardinal recruit Troy Williams, which means the Jayhawks join Alabama and Louisville as schools who could potentially land the duo of Williams and Cat Barber.

And finally, WHAS has a nice slide show from Sunday's Fan Day festivities.

The turnouts at the open practices, the bottle signing event and now the Fan Day have made it extremely obvious that Louisville football fans are more ready for this season than any other in recent memory.