Share All sharing options for: Has Louisville Added A Player For 2012-13?

IMG Academies has caused a bit of a stir this evening by tweeting that 6'10 forward/center Mangok Mathiang has "inked" with Louisville.

According to a source with the program, Mangok had been a member of the class of 2013 but has reclassified to 2012, meaning he would join the team immediately and snag the last of U of L's 13 available scholarships. Despite the IMG tweet, the source stressed that this addition was definitely "not official."

Mathiang has lived in both Australia and Sudan, and as we saw with Gorgui Dieng in 2010, tracking down transcripts, medical records and other necessary identity documents in these situations can be a chore. This is almost certainly a case where there's not going to be a signed letter of intent, and also one that likely won't be resolved before the end of the summer. 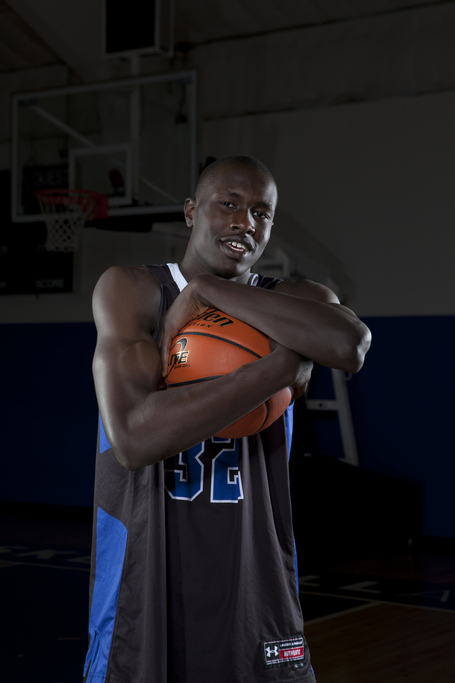 That said, the long and short of this situation appears to be that barring an eligibility road block, Louisville is likely going to add a big man for the 2012-13 season.

So what do we know about Mangok Mathiang? Well, not a whole lot outside of the fact that he's rated nearly across the board as a three-star prospect, and that his first name is pronounced "Mango."

That's enough for me.