Despite playing without a handful of its best players and falling twice earlier in the week, U of L commit Quentin Snider and the Louisville Magic AAU team captured yet another tournament title with a 65-58 win over the Compton Magic in the finals of the adidas Super 64.

Snider lived up to his recently attained five-star status by pouring in a game-high 23 points in the title game. He shared tournament MVP honors with fellow five-star Cardinal recruit D'Angelo Russell, who scored 18 points. 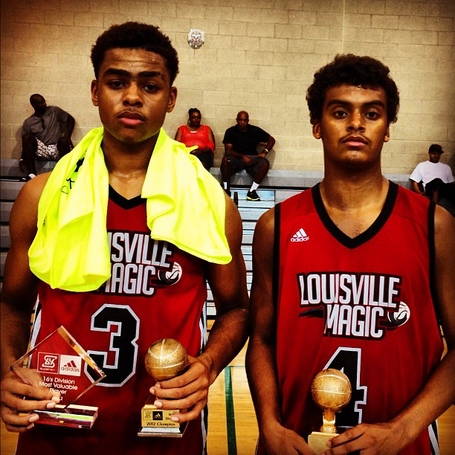 It's been a summer to remember for both the Magic and Snider, who has made the move from solid top 50 recruit to one of the headline players in the class of 2014. It's also refreshing that in age where early commitments have become more of a curse than a gift, Snider has consistently stayed firm in his commitment to U of L and spoken about his love for the Cardinals at every opportunity.

A local kid coming to U of L and turning into a star for the Cards is something that's been long overdue. We might not have to wait much longer.