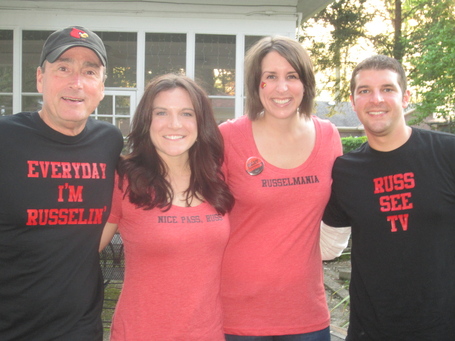 I can't think of anything more American for the Fourth of July Eve addition of CN&N than the picture directly above this text.

Stats don't tell the story with Bridgewater. Over 10 starts-while often running for his life behind a shaky line-he established himself as the pulse of the program. His high point came with a sterling performance in an upset win at West Virginia. Now folks in the 'Ville are expecting a Big East championship. The 6-3 Bridgewater has a serious arm and a presence on the field that just screams winner.

A little odd to see a publication that named a player its most valuable freshman in the country after last season referring to the same player as "under-the-radar" now, but whatever. Different strokes, or something like that.

Larry Vaught lays out the reasons why true freshman Patrick Towles should start at quarterback for Kentucky against Louisville. It's a stance that sits just fine with me.

Louisville QB commit/recruiting coordinator Kyle Bolin will get a moment in the national spotlight when his Lexington Catholic squad faces Ensworth (TN) on Aug. 25 in a game which will be carried live on ESPNU. Cardinal fans will also have a chance to see Bolin in person when the Knights travel to Louisville to face Male later on in the season.

*Keep your eyes pealed: If you're on the adidas trail in July, be sure to pencil in a couple of up-close looks at the Garner-Elite Coleman (N.C.) squad. It's the spring and summer launchpad to 2013 McDonald's All-American honors for a future North Carolina Tar Heel, Isaiah Hicks (6-8, Oxford, N.C.), and a soon-to-be Louisville Cardinal in Anton Gill (6-3, Chatham, Va, Hargrave Military).

Hicks is a bit wiry (200 pounds-ish or so) to keep from getting a lot of ACC bumps and bruises inside right now, but he's got a year to pound the protein shakes.

And Gill -- a potential member of what could be a pretty fair "all left-handed All-American" class -- is one of the more productive scorers, in transition or half-court settings, in the class.

Speaking of Gill, Rivals has updated its top 150 for 2013 and now has Anton as the 49th best overall player in the class.

Chronicloid Matthew Wheatley is hoping one of you can help find a home for Russ Smith the rescue dog.

My wife and I have taken on fostering a 1yo lab and pit bull mix that was left at Metro Animal Services. He was named Boo, but we quickly changed it to the more suitable Russ Smith the dog. Russ is a great dog who is extremely cuddly and loves to play. He is wonderful with people, kids, cats, other dogs and even fans of the Lexington Basketball Academy. He is neutered and up to date on shots. We would love if you could post a picture of him with news and notes and give a plug to help him find a home with one of your very attractive readers. You can link them to this email address(MWHEATLEY0016@kctcs.edu), the slightly outdated website http://www.derbycitydogrescue.org/boo.html or my phone number (502) 472-6299. 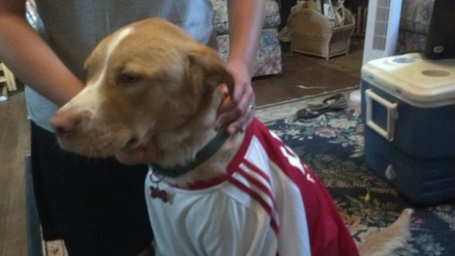 Thanks in advance to anyone who can help out.

The "most Internet news of the day" award goes to the following tidbit: Chris Walker, currently rated as the No. 6 overall player in the class of 2013, told Cardinal safety Calvin Pryor on Twitter Monday that he will be visiting Louisville soon. The 6'9 forward is also big on Kansas and Florida.

Former Cardinal second baseman Ryan Wright (who is now playing shortstop) is putting together a terrific season for the Class A Dayton Dragons, a Cincinnati Reds affiliate.

Louisville football players have been getting up at 5:45 a.m. every day for conditioning and lifting, and a quick glance at Twitter a virtually any time of the day reveals that the sessions are taking their toll on the fellas.

It'd be upsetting if they were enjoying it.

For those of you who love watching summer AAU basketball (few of you) but can't make it out to any of the big tournaments (all of you), CBS Sports Network has some gifts for you this summer.

U of L has an update on all how all the Cardinal baseballers are doing in their various summer leagues.

And finally, Jeff Walz has promoted Stephanie Norman to associate head coach of the women's basketball team. Norman has been at U of L for five seasons, including the national runner-up season of '08-'09.