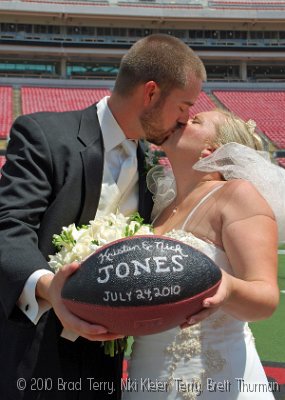 A very happy (and slightly belated) anniversary to Nick and Kristen Jones, who celebrated two wonderful years together earlier this week. On their first date, Kristen apparently insisted they go to a bar so they could watch Louisville play in the '09 Big East Tournament. I'm assuming it was the 'Nova semifinal, and you can't 'Nova without the same two middle letters in "love." That's special.

When talking (typing) about his desire to have the above picture featured on CC, Nick explained that the couple is expecting their first child soon, and that he "wanted to do something special."

Well when she scrolls down and sees that today's first blurb is me recounting the time I took my pants off in the middle of Frankfort Ave. and did my best impression of Teddy Bridgewater changing a play at the line of scrimmage, I think you'll know you made the right move.

One time I took my pants off in the middle of Frankfort Ave. and did my best impression of Teddy Bridgewater changing a play at the line of scrimmage.

I didn't really (he says for legal purposes), but that was like the whip cream on top of the cheesecake that was the joke in the opening spiel. Whatever, it's Friday, just enjoy the image.

In honor of the Olympics, the folks over at NBC have put together their college basketball "Dream Team." No Cardinals made the roster (Wayne Blackshear was a "final cut"), but Rick Pitino was tabbed as the man best suited to lead the squad.

Coach: Rick Pitino, Louisville: I just think that this roster looks like a Rick Pitino roster. A lot of shooters. A lot of small guards. A lot of athletes and shot blockers up front. I can see this team giving people fits with a 2-2-1 full court press.

My thoughts are with the friends and family of Neil Reed, who passed away at the far-too-young age of 36 on Thursday night.

He'll always be best known as the player who Bobby Knight choked during practice, but I'll remember him most for the game-winning trey he drilled from the left wing to beat Louisville in the '99 regular season finale when he was at Southern Miss. The loss cost U of L a share of the C-USA regular season title, and cost Denny Crum a $15,000 bonus. It also sent my dad out on a solo car ride to calm down.

He was a terrific player, and it's a shame that doesn't get to be his lasting legacy.

Here's a good Slam article from a few months back on U of L's newest point targe, JuCo transfer Chris Jones.

"He is the ‘straw that stirs the drink,'" explained Forbes, about Jones has meant to this year's team. "He's been a facilitator for others and has made big baskets for our team throughout the year. His passion and his will to win has rubbed off on the rest of our team. It's always a blessing when your best player is your hardest worker and he is our hardest worker."

Jones developed on and off the court. When asked what he has learned and how he has developed after his first year of JuCo, Jones responded, "This level and the coaches have taught me a lot. I've learned to play a more physical style of game. It has also taught me how to stay mentally strong on and off the court. I've become a more mature player and person." Jones also spoke about his development as point guard. He added, "I've learned how to be a leader and how to keep my teammates happy. I have always been and will be a scoring guard, but I've learned how to score and distribute."

The Louisville Magic - playing without Trey Grundy and Shane Hall - shockingly dropped back-to-back games at the adidas Super 64 before getting back on track with a win on Thursday. Wyking Jones has been in Vegas to watch Quentin Snider, D'Angelo Russell and the rest of the recruiting world do their thing. Kareem Richardson is also out in Sin City.

Here's video of Rick Pitino's appearance on Katz's Corner. He talks about the future of the Big East, how he didn't think it was possible for a coach to win a national championship with one-and-dones, and how the last two seasons have been the most satisfying he's ever had as a head coach. 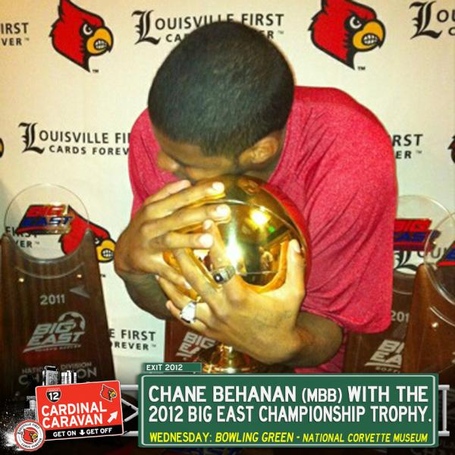 Horse Gorgui has two 4-furlong workouts scheduled in Florida this month. This means he'll likely be the first of the Cardinal trio to race.

If anyone has, or knows where to obtain, DVD copies of games from the 2007 football season, I know a former U of L player who is interested in your services. Shoot me an email if you can help.

A behind-the-scenes look at the new U of L/Maker's Mark partnership:

Louisville has sold 41,500 season tickets for football this season compared to 35,486 for Kentucky. That's pretty wild.

Athlon has Louisville at No. 5 on its list of national title darkhorses.

Why They Will: If you are looking for a team on the rise, look no further than Louisville. Sure, the Cardinals record is just 14-12 in the last two years, but the program is on the right track under coach Charlie Strong. Louisville has also played a handful of young players over the last two seasons, including sophomore quarterback Teddy Bridgewater. As a freshman last year, Bridgewater threw for 2,129 yards and 14 touchdowns. He should only get better in 2012, especially with a talented group of young receivers returning. The defense should rank among the best in the conference, and the incoming recruiting class will bolster the depth and talent on each level, particularly at linebacker with Nick Dawson and Keith Brown. The Cardinals have some tricky games on the schedule but should be favored in each contest.

Why They Won’t: Even if the Cardinals can navigate through the season with one loss or an undefeated record, it’s a longshot they would climb high enough in the BCS standings to play for the national title. The Big East does not have a strong reputation right now, which will hurt Louisville in terms of national respect. In order for the Cardinals to make a run at the national title game, they need some help from their Big East foes. Getting Pittsburgh, Rutgers, and South Florida to make a run into the top 25 would help the conference’s reputation and give Louisville a boost in schedule strength. The biggest personnel issue for Louisville is youth. Eleven sophomores could earn starting spots in the two-deep, while there’s only six seniors expected to see significant snaps in 2012.

The Cards also have been picked by many as the favorites to win the Big East Conference.The players are well aware of their preseason accolades, and already Strong has had to combat the entitled mentality that comes with it - including one player posting on Twitter that U of L would go undefeated.

"You would like to be a confident team, but can you control that confidence where you don't get cocky and you don't get arrogant and still realize that you still have to work?" said Strong, who later added that social media would be the downfall of society.

He said there is no way to limit the hype the players hear about their team, so his job is to keep them from buying into it.

Inside Carolina gives an in-depth early preview of the Tar Heels' Sept. 15 showdown with the Cards.

And finally, Trinity star Jason Hatcher will be making his college choice tonight at 7 p.m. from the Hyatt Regency downtown. It'll be a stunner if he picks Louisville, but it'll be an even bigger stunner if there isn't word of him wavering on wherever he commits at some point between tonight and the end of the semester.