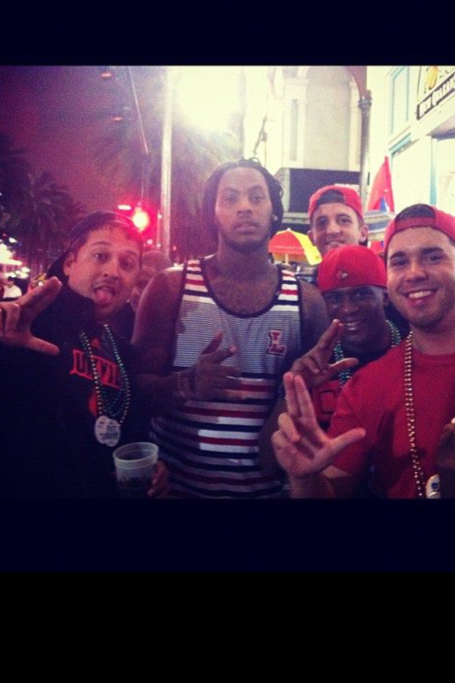 Phil Baker and friends supporting the Cards on Bourbon St. with the man known as Waka Flocka Flame.

I've always just assumed his name was born at least partially out of the fact that he's a huge Fozzy Bear fan. I haven't attempted to confirm that yet because I'm too afraid of finding out it's not true.

I'm still trying to play catch-up in all areas after the extended weekend in Chicago, so thanks for bearing with me.

Do I think it's a coincidence that the DePaul basketball staff was eating dinner with Matt Jones at the exact time I was getting into Chicago? Please. There are no coincidences with Oliver Purnell. Every move is calculated.

I didn't get a chance to hit up the Blue Demon bookstore, but I did come home with this gift from the groom for the Headquarters. 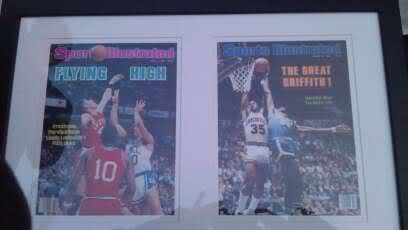 A nice bone to throw to the working folk, and also a welcome shift from the 6 a.m. season kickoffs of yesteryears.

It's since been corrected, but the original Big East summer shootaround feature from Dana O'Neil featured a pretty egregious error.

This year people expect the Cardinals to thrive as well as survive, all the way to Atlanta and a Final Four return engagement.

The rationale is simple: Louisville returns everyone to the lineup save Preston Knowles and inserts George Mason transfer Luke Hancock to fill that role. (That is, after Hancock recovers from shoulder surgery. Not everything has changed in Louisville).

But Rick Pitino knows a thing or two about trying to get back to the Final Four, having walked down Expectation Highway with Kentucky in 1996 and 1997, and realizes what he's up against.

"This past year at Louisville, we didn't expect to go but now we have high expectations to go and do it," Pitino told ESPN.com's Andy Katz. "I think this time will be tougher than it was at Kentucky. At Kentucky, it was totally unexpected, but this time it will be expected. It's hard to have a Final Four that will be expected."

Louisville, of course, loses two starters from last year's team, and neither of them are named Preston Knowles.

Yahoo continues its summer college football countdown with Louisville checking in at No. 26.

Strong has done a good job in a short time; it has helped that the league as a whole isn't that tough.

He has mined his recruiting roots at Florida to bring in a number of good players. Three-quarters of the starting secondary, a starting linebacker, half the starting defensive line, the starting quarterback, two starting receivers and at least one starting offensive lineman are Florida natives. In addition, two of the top four tailbacks also are Floridians.

Strong and his staff also have changed the team's mindset. This team believes in itself again and plays with a certain swagger. That will pay off this season, and in the future.

The Cardinals will win at least eight games; an eight-win season, though, frankly would be disappointing. The Cardinals should win nine or 10 and finish the season in a BCS bowl. The last time they went to a BCS bowl was in 2006 - and they lost their coach (Bobby Petrino) soon thereafter. If Louisville is in the BCS this season, you can bet some bigger schools will come after Strong.

Trinity star James Quick sent U of L fans into a tizzy on Thursday night when he began tweeting about hearing news that had "changed everything" as far as his recruiting situation is concerned. After a series of equally vague statements, Quick stated that Ohio State and Louisville are now tied as the leaders for his services. Take from that what you will.

Some more negative, albeit expected, news from the recruiting world as basketball star Chris Walker committed to Florida and football standout Artie Burns to Miami. Both had listed Louisville among their finalists. 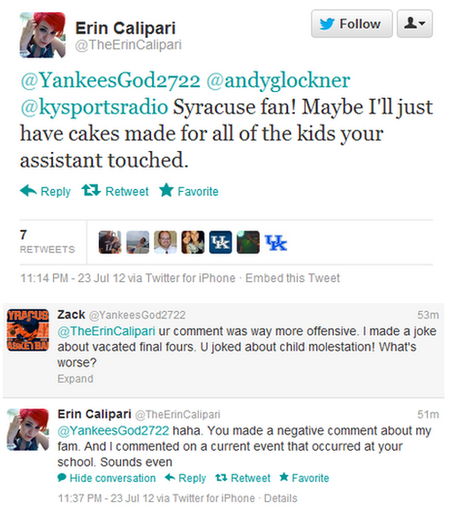 Eric Crawford gives us a quick shoutout while talking Sunny Will.

The University of Louisville senior quarterback earned the nickname "Sunny" from the mega-popular Every Day Should Be Saturday college football blog (parental discretion advised) and Mike Rutherford's Card Chronicle blog (where children are always welcome). He's also earned the nickname "Favre" from U of L coach Charlie Strong, because he essentially believes he is Favre once he steps onto the field.

This time a year ago, Stein had the inside track to the starting quarterback job and was preparing to cap an unlikely ascent after coming to U of L as a walk-on from Trinity High School. This season, he's still preparing to be a starter -- but knows that pushing expected starter Teddy Bridgewater and being a source of leadership for the team are roles that could be equally important.

With U of L football players largely off-limits to the media this summer, Stein gave a first look into the offseason workouts from a player's perspective.

"Overall it's been a really good summer," Stein said. "We're growing together as a team. There's a lot of chemistry being built, and it's been fun to the see the young guys improve and grow and mature."

Of course this is the day Waka Flocka pops up on the news and notes pic list.

Tom Jurich and Makers Mark COO Rob Samuels will be holding a press conference this morning to discuss a new project between Maker's and U of L. No official word, but there's chatter that it has something to do with the construction of a new academic center.

Clemson transfer Bryce McNeal was among the visitors on U of L's campus this weekend. The former 4-star recruit has two years of eligibility remaining and would be able to play immediately for Charlie Strong if he chooses to become a Cardinal. McNeal was thought to be headed to Connecticut.

Another weekend visitor was wide receiver recruit Corey "CJ" Cooper, who tweeted out this picture: 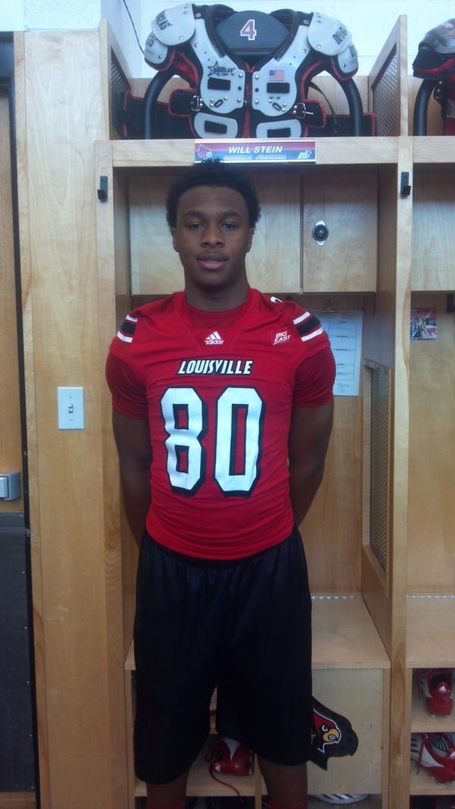 Trinity's Jason Hatcher, who is rated as the third-best defensive end in the country by Scout.com, is set to announce his college decision this Friday, July 27. It will be a shock if he doesn't pick USC, and my guess is that this will also mark the start of a brief fan freakout over the future of our 2013 class.

While I do think the "recruits are wavering because they don't want to play in the Big East" storyline may end up being one worthy of significantly diving into, I'm not sure Hatcher spurning Louisville marks that occasion. I know he's a local kid, and I know keeping local talent home was a focal point for this class, but...it's USC. You can lose recruiting battles to USC when the kid is the son of a former quarterback who was born inside your practice facility.

Demetrius Jackson, who was in town over the weekend for he Bluegrass Classic, has become a point guard in the 2013 class that the coaching staff has really become fond of. Even if Cat Barber and Tyler Ennis choose to take their games elsewhere, it sounds as if Rick Pitino and company feel very confident about Jackson's ability to come in and potentially compete right away for the right to be Peyton Siva's successor at the point guard position. 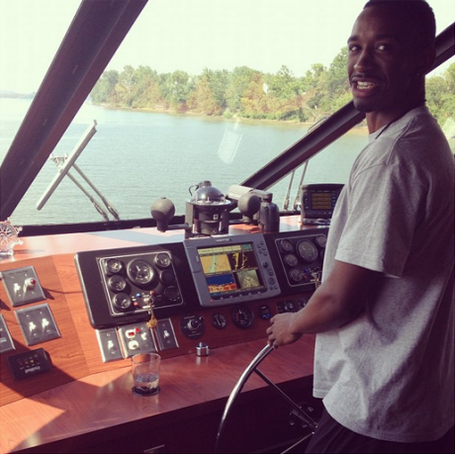 Chances Russ dropped a "king of the world" reference? I'll go 16%. He's better than that.

It was interesting to hear Peyton Siva and Rick Pitino both say in recent days that right now Kevin Ware is your starter at the two guard position. I suppose it's understandable given the fact that Luke Hancock is out until the fall and Russ Smith is spending most of his summer competing with Peyton at the point, but guy who can't get off the bench to starter on the potential preseason No. 1 team in the country is still quite a leap.

Kudos to Kevin for putting in the work.

And finally, Jay Bilas says Louisville looks like the best team in the Big East for 2012-13. He has Syracuse and Notre Dame, two of U of L's four mirror opponents, ranked second and third, respectively.