Earlier this afternoon, investigative reporter Charles Robinson, Yahoo! Sports' grim reaper, published a story detailing new potential recruiting violations that occurred at the University of Miami under the watch of the Hurricanes' current coach, Al Golden. The report alleges that Golden and his staff used Sean "Pee Wee" Allen, an equipment manager with ties to Nevin Shapiro, to sidestep NCAA rules in the recruitment of multiple football players. 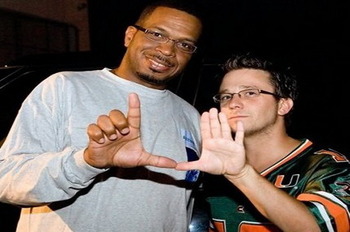 While the latest story focuses on Golden's staff's role in the new allegations, it details some involvement of current U of L football players to include Teddy Bridgewater, Eli Rogers and James Burgess. Here's part of the blurb about Bridgewater:

• On Dec. 17, 2010, five days after Golden was hired as Miami's coach, Allen testified that he was summoned to the restaurant Dan Marino's in South Miami to pick up Miami Northwestern High school quarterback Teddy Bridgewater. Bridgewater had withdrawn his commitment to the Hurricanes earlier in the month and Golden's staff was attempting to reverse his decision.

Phone calls between Sean Allen and Aubrey Hill and recruit Teddy Bridgewater.Allen testified that Bridgewater, Golden and other Miami coaches were at the restaurant during an unofficial visit and that a member of the coaching staff asked Allen to pick Bridgewater up. Allen testified that "I sat with Teddy and – actually that might have been the first time I met coach Golden, and they talked and I drove Teddy home from there."

Allen's phone records show eight calls exchanged with Bridgewater that afternoon and early evening, as well as four calls exchanged with Hill. The former Miami staffer told Yahoo! Sports that Hill, a then-Miami assistant, was present at the restaurant and arranged for Allen to pick Bridgewater up and transport him home – a violation of NCAA rules. The staffer also said Golden was aware Allen was there to take Bridgewater home.

We suspect many of these details involving current Louisville players were already made known to the NCAA when it began its investigation several months ago and are likely not serious enough to warrant future penalty assuming the members mentioned were candid and open with the investigators. It would be difficult to opine about worst case scenarios right now, but suspensions would obviously make for a bad day for anyone involved. U of L's athletic department was recently contacted by Yahoo! Sports and Bridgewater, Rogers, Burgess and Football Sports Information Director Rocco Gasparro all declined comment.

Not mentioned in this latest development is U of L Associate Head Coach, Defensive Line Coach and Recruiting Coordinator Clint Hurtt, the former recruiting coordinator at Miami. That's a relief but does not mean his involvement is absolved in the ongoing investigation into the Hurricanes athletic department.

Try not to let this ruin your weekend.