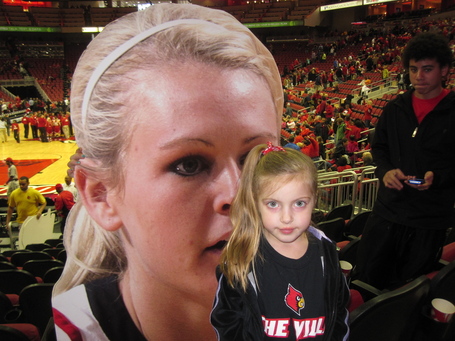 The side pony is always a playmaker.

I am about to hit the road for Chicago to the best man at the currently-banned "Web's" wedding on Saturday. This, again, means that you will mostly be in the able hands of others from now until Sunday.

I'll bring you back something from the DePaul bookstore. I promise. I don't know if they have Jerry Wainwright tank-tops. Yes, I'll check.

If nothing else, the Cardinal Caravan has produced some tremendous pictures this week. 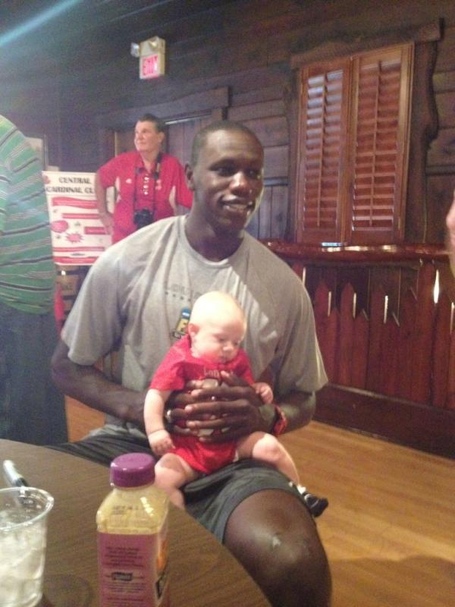 Peyton and an alligator: 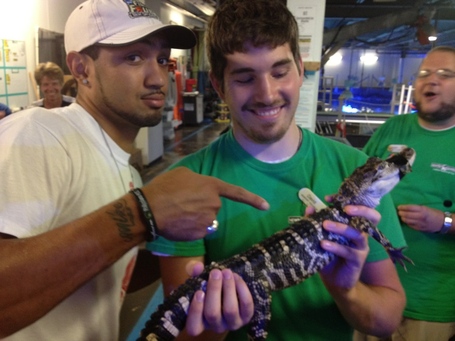 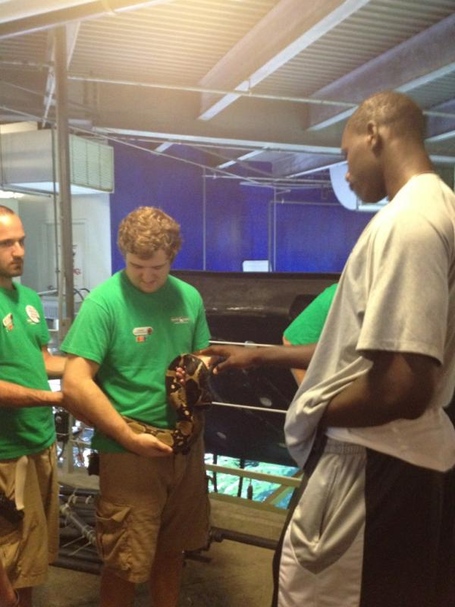 A really good Q&A with Peyton Siva from Eric Crawford.

Q: So Gorgui went home, did he come back with any good stories from his trip?

SIVA: Gorgui came home speaking a lot better English, surprisingly. He said the only reason he came back was because he missed us, otherwise he would have stayed. He hasn't told us anything yet about how it was over there. But he learned how to drive and got a car over here and I'm kind of scared to ride with him. So stay off the road if you guys see Gorgui.

Q: From this time a year ago to now, how is Coach Pitino different?

SIVA: You can see he just wants to work. He wants to be at the gym every day. I think it's killing him that they put in that time limit, because he loves to work with us. I remember the story about when he used to coach at Providence and they used to have the unlimited time rule, he said when they changed that rule a little piece of him died. Especially with this team, he loves to come to work every day, he loves to see us, he loves to run us to death. But it's just a great feeling to have him there and have him supportive. He's just building everybody up and being a very positive guy. And it's been fun to be around him and everybody loves the attitude and feeds off it.

If you didn't catch Siva's "I'm never washing this cheek again" line on WHAS after being kissed by a little girl at the Caravan, then you missed the summer's most adorable moment.

Teddy Bridgewater has been named to the watch list for the Davey O'Brien Award, which is given annually to the nation's top quarterback.

If you missed the news yesterday, Pittsburgh is headed to the ACC in 2013-14 after agreeing to the same $7.5 million buyout deal with the Big East that Syracuse did.

Anthony "Cat" Barber has been telling recruiting analysts this week that Alabama is the schol recruiting him the hardest. I think it's also pretty telling that Kanas and Louisville, two of Barber's three other choices, both recently offered fellow point guard Demetrius Jackson.

Still, if U of L can get Barber on campus (which seems to still be the plan of both parties) then you have to think they still have a shot.

Anthony Grant will be the head coach at one of the ten best programs in college basketball before all is said and done.

2. Rick Pitino, Louisville
Overall record: 627-230 (42-16 in the NCAA Tournament)
Record at Louisville: 275-106 (81-41 in the Big East)
Similar to the other active Hall of Fame coaches, Pitino keeps winning and keeps adding to his list of accomplishments. He and rival John Calipari remain the only coaches to take three teams to the Final Four. Last season, he joined Roy Williams as the only coaches to take two teams to multiple Final Fours. He's accomplished this at Louisville without a consensus All-American in his tenure (he had three at Kentucky). Of course, there's plenty of talent at Louisville. The 2012-13 season won't be an exception as the Cardinals are likely to start the season in the top five.

Boeheim won't be an ACC coach for another year, but he's certainly speaking as if he already holds the distinction.

I never had this type of luck during my law school days.

Class of 2013 power forward Kentan Facey, whom Louisville recently offered a scholarship, is beginning to generate a great deal of attention. The native of Jamaica is close friends with former Cardinal Samardo Samuels.

Louisville basketball recruit Malik Price-Martin has reclassified to the class of 2014.

A good story from USA Today on Pervis Ellison, who is now spending his summers coaching AAU ball.

"I get a little intense, but it's a good intensity," Ellison said. "When you're trying to teach, you're a little more boisterous."

One daugther, Seattle, ran track as a junior last season at Eastern (Vorhees). Another daugther, Aja, is a 6-3 center who can dunk and helped the Shipley School (Bryn Mawr, Pa.) win its second consecutive league title as a sophomore last season. His son, Malik, was a 6-2 freshman guard last season at Life Center Academy (Burlington, N.J.), where Ellison just finished his first season as the team's head coach.

None of his players at Life Center or with Team Final was alive when Ellison won the NCAA Player of the Year award as a freshman, but they know of him.

"I wear a shirt that says 1986 Louisville on the front and No. 1 pick on the back, so they know all of that," Ellison joked. "No, we have a good group of kids who've studied the history of the game. It's a good situation."

Some highlights of top U of L recruit Jordan Mickey from the Adidas Invitational.

Trinity's Ryan White isn't the only one who has gone from a Cardinal "commitment" to a "soft verbal." Various scouts are confirming that at least Marquis Haynes and Donel Elam have backed off of their complete commitments to U of L in recent weeks.

You also haven't heard these guys talking or tweeting about Louisville going to the Big 12 recently. These two bits of information lead me to believe that members of the staff may have told these kids that the Cards might still be in the Big East when they get to campus after all.

As far as White is concerned, the school he's reportedly shown the most interest in lately is Vanderbilt, which is a little hard to believe. I know they're in the SEC, but they're not really in the SEC.

Here's hoping the fact that Adidas has supplied Trinity with new uniforms for this season will help U of L out with White, Quick and Hatcher.

My Mountain West basketball preview for SB Nation was published yesterday and had UNLV as the pick to win the league. Defending regular season champ New Mexico was slotted at No. 4. The result? An email from an angry Lobo fan whose girlfriend's sister "knew you when you were both at UNLV and says you were a f---ing loser."

I did not attend college at UNLV. Enjoy your daydreams about Gorgui's game-finisher in the round of 32.

The Ladybirds will be holding a car wash tomorrow from 10-6 at Impellizzeri's on Brownsboro Rd. Rwiegs has the rest of your info.

Angel McCoughtry siad last fall that her dream (no pun intended) was too meet President Obama. 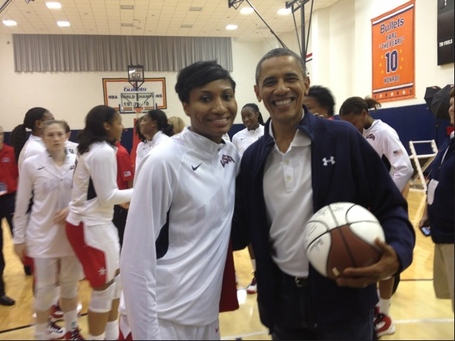 Cardinal recruits Corey "CJ" Cooper and Darnell Thompson will be visting U of L tomorrow.

Quick reminder that the Cardinal Caravan will be at Captain's Quarters tonight from 5:30-7.

The award for most UConn football story of the day goes the freshman quarterback Casey Cochran breaking his left wrist in a bicycle accident. The good news for the Huskies is that Cochran is right-handed.

The final piece of merchandise that Bobby Petrino donate to the Goodwill store in Arkansas was a U of L football jersey.

Petrino also made headlines this week for serving as the caddy for his daughter, Katie (a U of L golf team member) in the Kentucky Women's Open.

According to college soccer writer Chris Henderson, the Louisville women's team has received a huge commitment from Charlyn Corral, a member of the Mexican national team.

West Virginia has been picked to finish second - just behind Oklahoma and ahead of Texas - in its first season as a member of the Big 12.

Broncos fans felt the need to deliver a message to former Cardinal (and current Denver) star Elvis Dumervil after his recent arrest. 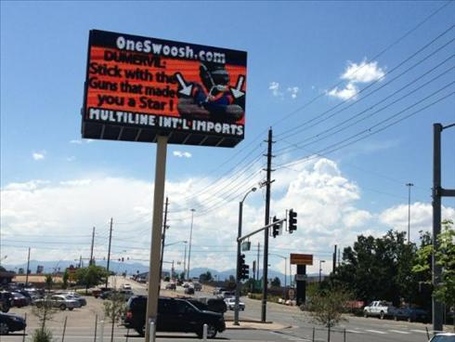 And finally, I've had some folks tweet word that a handful of liquor stores have started selling the Charlie Strong Maker's bottles a day ahead of schedule. Might be worth a shot to get on the phone and start calling the spirit shoppes in your area.