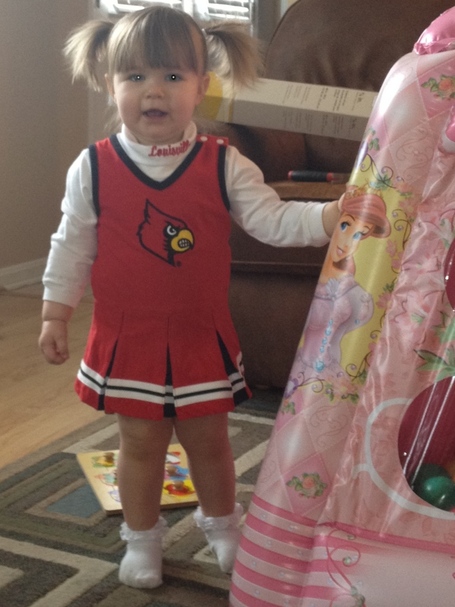 HotHot, get the kid on the phone.

I rarely buy into the "the local paper has it out for so and so" talk, but the "Pitino Tells Van Treese to Leave" headline in Thursday morning's C-J seemed pretty intentional. You've already had Pitino say he doesn't like and doesn't read the C-J, and now word leaks that he's doing a book with the freshly departed Eric Crawford. You draw your own conclusion.

And if it wasn't intentional then it was just irresponsible. Not sure which is worse.

Speaking of Pitino, he appeared on the radio with Terry Meiners early Thursday night and offered up several interesting tidbits. Among them...

--Stephan Van Treese's situation is very comparable to Elisha Justice's. He wants to play significant minutes, and that's not going to happen here. Pitino suggested that he go to Bellarmine, a place where he can play 35 minutes a night and potentially win a national championship. He is a terrific kid and Pitino is happy that he'll get the chance to play somewhere.

--He spoke with Billy Donovan, who is coaching Montrezl Harrell on the u-18 USA Basketball team, and he just raves about him. He needs to work on his ability to score with his back to the basket, but he's a guy who's going to come in and help us right away.

--Thinks Gorgui is going to be significantly better next season.

--Right now in individual workouts, Russ Smith and Kevin Ware are looking better than anybody. If Russ doesn't start this year he's going to be one of the best 6th men in college basketball.

--Louisville wanted to play Indiana next season, they even offered to travel to Bloomington, but Tom Crean didn't want to. We've already got a great schedule, but playing IU would have made it even better.

--He's writing a new book titled Blinders about how to stay focus and be successful in this world of so many technological distractions. Eric Crawford is helping him write the book. Hopes for it to be out around March Madness time next year.

--Doesn't think Louisville is going to the Big 12 because those schools don't want to share the wealth.

The individual rankings for the NCAA Football 2013 game have come out, and here are Louisville's ten highest rated players (with their rating in parentheses...which are these things):

My guess is they were thinking of Shenard Holton when they rated Kamal Hogan. Or maybe they're just taking a chance based on some inside information and hoping for a big payoff. Both scenarios are in play. 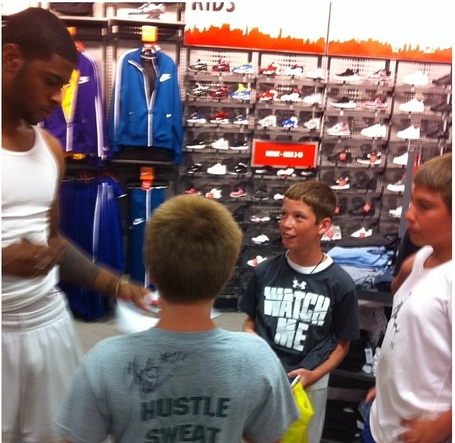 True story: "Hustle Sweat" and "Watch Me" - aka "The Cocky T-Shirt Crew" or TCTSC as they're known throughout the St. Matthews area - delivered a vicious mall beatdown to yours truly about 15 minutes before this. DO NOT look those middle school mall kids in the eyes.

For a program that has almost always played second-fiddle to the more popular (and populist) Kentucky Wildcats, Louisville has built a large share of its own tradition over the decades. But forget all that. This job is good right now, in 2012, for far more tangible reasons. The Cardinals boast perhaps the nation's most glimmering arena in the KFC Yum! Center, and, with all apologies to the Louisville Bats, they're the only game in town in what is, according to Neilsen, the 48th-largest media market in the country. That combination of facilities and massive local support makes Louisville as attractive a destination for recruits as nearly anywhere in the country.

I like Eamonn a lot and I'm sure he put a lot of time and effort into these rankings, but having U of L behind Ohio State is borderline indefensible. Louisville has the advantage over OSU in tradition, revenue, facilities, fan support and just about every other conceivable area of measure. There's also the issue of the Ohio State basketball gig being completely overshadowed by its football counterpart.

Duke down at six is also a tough sell. It's essentially the college basketball equivalent of Notre Dame, and whenever Krzyzewski elects to hang it up, the search for his replacement will be the biggest story in sports.

Even though he may not be a top five video game player for Louisville, Teddy Bridgewater has been named as the No. 1 NFL quarterback prospect in the class of 2015 y NFLDraftScout.com and CBS.

Louisville pitcher Jared Ruxer has been named a Freshmen All-American by Collegiate Baseball.

Fyi, if you've been thinking that I almost pulled the trigger on an inappropriate joke at the beginning of this post, you seriously could not be more right. You've got Belle, you've got balls, you've got a "play-pit," there's a potential for entering and diving...it could have gotten real bad. I didn't want Chloe to see that. 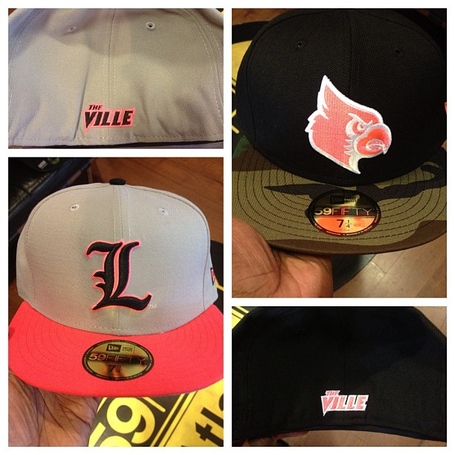 Hoops Authority says Louisville could be the No. 1 team in the country heading into next season.

The Kentucky All Stars will attempt to stop the bleeding against the kids from Indiana tomorrow night inside Freedom Hall. The girls will take the floor first at 5:30 with the boys game to follow. Tickets are ten bucks.

On the way down to Rough River last weekend for my friend's bachelor party, we drove through a town named Harned. If you've ever seen the movie Big Fish, Harned is pretty much exactly like the town of Specter. I will live there one day. You will visit. You will call ahead before visiting.

An early heads up that Francisco Garcia and Edgar Sosa (potentially) will be playing for the Dominican Republic national team against "Team Ignition" of Cincinnati at the Bank of Kentucky Center at NKU on June 12 and June 13 at 8 p.m. both nights. I'll post a reminder with more info. before the games next week.

In honor of our man Trez: 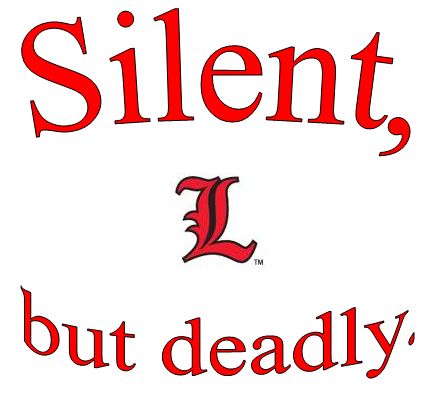 Factoid of the day from U of L: Since 2003, the University of Louisville has produced more Fulbright Scholars (68) than all other Kentucky colleges combined.

If you're a Cardinal, use that at the bar tonight on some poor, unsuspecting coed from Centre. She'll never even know she's making a mistake.

A happy belated birthday to Zach Price, who turned 19 on Thursday. I will score one point ("Zach Price Special") doing...something today in your honor.

Kentucky freshman cornerback Jonathan Reed caused quite the stir on Wednesday with these tweets:

At first it was just a traditional rivalry with Louisville but I really hate them now...

I really can't wait to dance on that ugly red bird in the middle of Papa John Stadium.

This sparked some fairly intense back and forth between the Louisville and Kentucky bases. Yet another reason why the game should ALWAYS be played as the season-opener.

It's also worth noting that Reed took a handful of shots from U of L fans that came close to or did cross the line. I just don't understand the rationale behind tweeting a hateful message in the direction of an 18/19-year-old kid. Do you think it's going to make him cry? Do you think it's going to make him quit football? Do you think he's going to suddenly have a change of heart and agree that he sucks, Kentucky sucks and Louisville is awesome? Are you just trying to garner the attention of a college football player because you think it's cool? If so, you're probably not in your teens and shouldn't be using a computer sans parental guidance.

The only thing these tweets can accomplish is making us look bad and revoking our right to make fun of Kentucky fans and their bats--t crazy behavior. Don't do that.

ESPN has released its first "ESPN 300" for the football class of 2013. Trinity stars and Louisville recruits James Quick and Jason Hatcher both make the cut at No. 60 and No. 281, respectively. Cardinal recruit Vernon Hargreaves checks in at No. 4 overall.

New Kentucky Sports Hall of Fame member Angel McCoughtry is the key to Atlanta's hopes for a WNBA crown this season.

And finally, a group of ten U of L students currently studying abroad in China recently noticed a familiar emblem on a basketball inside a "Chinese equivalent of WalMart." Student Body President Justin Brandt snapped this picture as evidence. 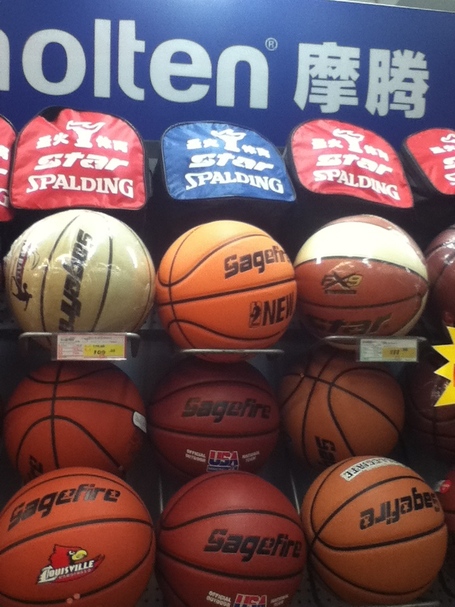 Not surprisingly, there were no Georgetown balls in the store.