Nobody sent me pictures of their pets or kids in Louisville gear unprovoked with only 18 hours notice of Mike leaving for the weekend, so I'll just selfishly post a photo of the Cardinal Bird cake my lady-friend made for my birthday last month. It had a layer of mint chocolate chip ice cream in the middle. It was glorious: 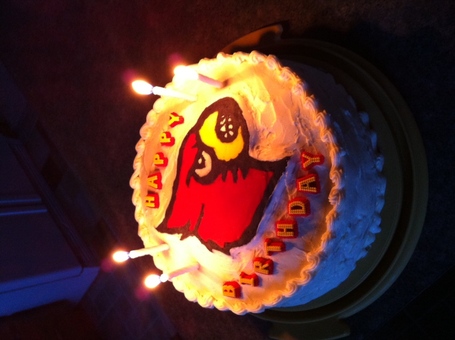 As many expected, neither Chris Smith nor Kyle Kuric were selected in last night's NBA Draft. Kuric revealed earlier this week he had no intention of playing in the NBA D-League and plans to play professional basketball in Europe for a couple years. Adam Zagoria is reporting today that Chris Smith has signed with the summer league team of the New York Knicks, where his brother J.R. played last season. Since second round draft picks aren't guaranteed an NBA contract, one could argue this a much better situation for Chris than to be drafted late by some team he didn't work out for in an unfamiliar city. Best of luck to both.

Not content with ruining leaking every NBA Draft pick on Twitter 90 seconds ahead of time, a handful of basketball draftniks have already published mock drafts for 2013 and multiple Cardinals are featured.

For our random regional sports stat geeks: Last night saw a Kentucky Mr. Basketball (KMB) get drafted for the first time in nearly 20 years. Mason County's Darius Miller, KMB in 2008, was taken 46th by the Hornets in last night's draft, becoming the first KMB drafted since Louisville Central's Dwayne Morton ('90 KMB), who was taken 45th by Golden State in the 1994 NBA Draft.

That streak would've seemed inconceivable back in the early days of the Mr. Basketball title in Kentucky. Starting with the first KMB, "King" Kelly Coleman ('56), 17 KMBs were drafted by NBA teams from 1956-1994, including 14 in the first two rounds.

After perusing the list of past KMBs, the first two names that come to our mind are DeJuan Wheat and Chris Lofton. As it were, Male's Jason Osbourne was named KMB in 1993, Dejaun Wheat's senior year at Ballard. That doesn't shock us because Osborne was considered the better NBA prospect at the time and due to academic issues, declared (too) early for the draft and ended up overseas. Correction: Upon further review, DeJuan Wheat did not graduate from Ballard in 1993. He graduated in 1992 and sat out a year prior to attending U of L, apparently due to academic issues. We were in elementary school at the time and regret the error.

What (still) surprises us is Mason County's Chris Lofton, who was the 2004 KMB and 2007 SEC Player of the Year and yet still didn't make an NBA roster.

Kentucky Basketball Academy notwithstanding, the lesson here is it's really, really hard to get drafted into the NBA. Just ask Kevin Jones, Tu Holloway, Scott Machado and several other college stars who failed to hear their name called last night. 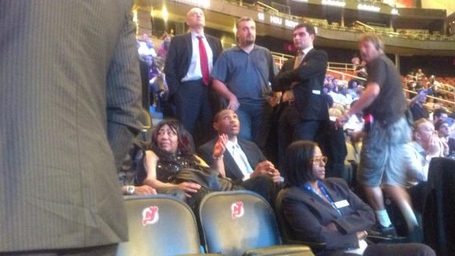