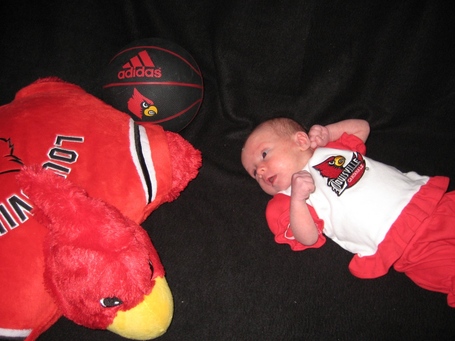 Emily Kate Blaylock says she gets worried about offseason scholarship situations about as often as Bone Crusher gets scared.

I am about to walk out the door for a long weekend in Columbus to celebrate the wedding of "Dan" (who is still getting married despite the second part of the Final Four diary), so you're going to be mostly in the hands of others for the next few days. Treat with them with the same level of disrespect you treat me.

I left 40 dollars on the kitchen table. Anything but Pizza Hut. Your brother doesn't like the crust.

Louisville's spring sports carried it to near program-best finishes in both the Director's Cup and Capital One Cup all-sport standings.

In the spring, the Cardinals picked up 147 points in the Sports Directors' Cup for a total of 611 points. Overall, Louisville had the second-highest finish among all BIG EAST schools. Under head coach Sandy Pearsall, the BIG EAST Softball Coach of the Year, the Cardinals advanced to their ninth-straight NCAA Regional and were selected to host the event for the second-straight time. The baseball team also advanced to regional play, making its fifth appearance in the last six years, while advancing to the final of the regional for the fourth time in the last six trips. Additionally securing points for the Cardinals was the women's track and field teams, as the squad finished in the top 50 at the NCAA Outdoor Championships.

Louisville finished with a BIG EAST-best 38 points on the men's side in the Capital One Cup behind strong finishes from the men's basketball team, which reached the NCAA Final Four, and national champion Carlos Almeida propelling the men's swimming team to a ninth-place finish at the NCAA Championships.

The Cardinals improved in both standings from a year ago, jumping two spots in both the Capital One Cup and Learfield Sports Directors' Cup.

Interesting news from the always interesting world of Hunter Cantwell, as the former U of L QB has turned down an opportunity to be the third string quarterback in Jacksonville in favor of becoming the quarterbacks coach at Campbellsville University.

Hunter's an extremely easy guy to root for, and I wish him the highest degree of success in his new career.

Stephan Van Treese is glad that everyone's excited about his return, but he'd prefer it if you left your shirt on while celebrating. 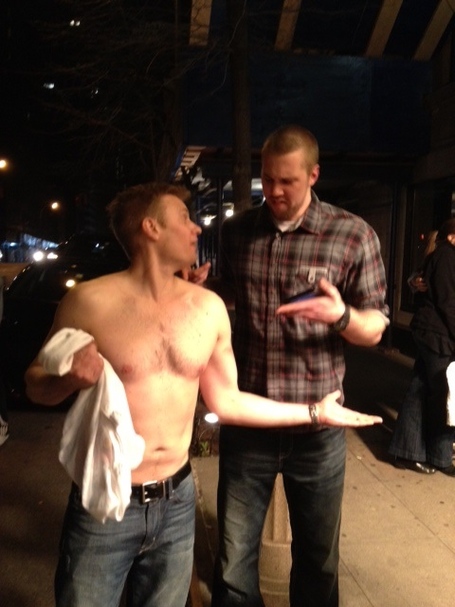 Louisville ranks 15th in terms of NBA Draft production amongst Division-I college basketball programs over the past 25 years. Duke tops the list...which probably took an extremely long time to research and organize and should thusly be admired and respected by all.

U of L sports gives its preview of the Cardinal football team's first opponent.

He takes the place of former VP Greg Shaheen, who held the title of director of all championships at the NCAA.

The men's basketball committee met in Salt Lake City this week to discuss a number of issues, and Gavitt's hiring is expected to be warmly received. The move was applauded by former Big East commissioner Mike Tranghese.

"It is great for Dan, for the NCAA and college basketball," Tranghese said. "He is really excited about it. The basketball committee wanted someone with strong basketball ties, and he is the right person."

The 2011-12 Least Cool Person Tournament has a Final Four, and it's comprised of the grating quartet of John Calipari, Karl Hess, Matt Jones and Doug Gottlieb. It should be an interesting pair of semifinal showdowns.

Mark Jackson, the father of former Card Chronicle crush B.J. Flynn Mark Jackson Jr., has apparently been the target of an extortion attempt by a former mistress.

I does not pay to stray, folks. It's not that difficult an urge to satisfy.

Sports Illustrated has a terrific story on Griffin Uhl, who will walk-on at Louisville this fall despite having never played high school football.

National Signing Day came and went, and more than a month later, Uhl still didn't know where -- or if -- he was going play college football in the fall.

In fact, most of the schools that once expressed interest stopped contacting him altogether. Except Louisville.

Hipps played with Louisville's defensive line coach, Clint Hurtt, during his career at Miami. Hipps told his former teammate about Uhl, but Hurtt already had his eyes on the under-the-radar prospect. Hurtt recognized Uhl's potential during a Louisville camp the previous summer and continued to stay in touch with him.

Louisville couldn't offer him an athletic scholarship -- he didn't play high school football, after all -- but Hurtt was confident that if Uhl walked on, he would be able to earn one.

As the Uhls sat around the dinner table one night, Linda admitted she was warming to the idea. "If he walked on, it would be fitting because he didn't do anything else the conventional way," she said.

This is certainly a situation worth keeping an eye on.

Louisville is the latest to offer Connecticut power forward Chris McCullough, who is widely considered to be a top ten prospect in the class of 2014.

And finally, it's draft night, which means this must appear in some form on the site. 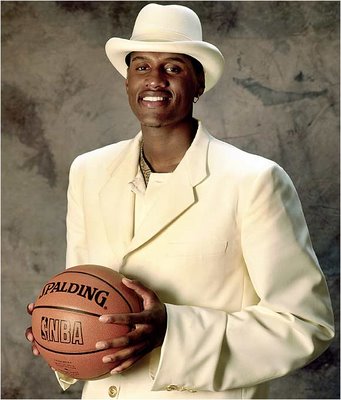