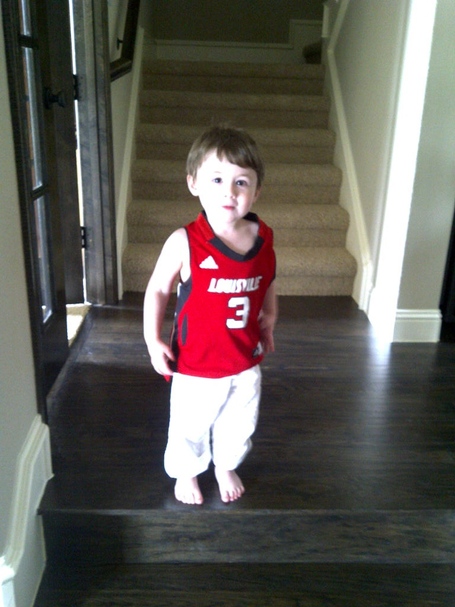 The Preschoolers for Peyton movement is hard at work in preparation for its final run. It was just four years ago when this young man was a "Baby for PeyPey." God, time flies.

NFL Draft scout Rob Rang of CBS takes a look at the top five draft prospects for Louisville this season (means they have to be juniors or seniors).

1. OC Mario Benavides (6-4, 302)
Toughness and reliability are two of the most important attributes NFL teams look for in interior offensive linemen prospects and in Benavides they'll find both. A highly regarded prep prospect, Benavides elected to sign with Louisville despite playing his prep ball in Texas and has proven a star since, earning Freshman All-American honors in 2009 and All-Big East recognition after each of the past two seasons. Benavides' ultimate pro grade could be determined by his medical, as he's played through some tough injuries over his career, including a knee injury last year that sidelined him for the first three games of the season. I'd like to see Benavides play with a little more power this season but he has enough athleticism to make an NFL roster as an interior lineman and uses his hands well. He enters the year as NFLDraftScout.com's No. 5 rated center for the 2013 draft.

2. S Hakeem Smith (6-1, 185)*
Based on his impactful play over the first two starting seasons of his career, one could make the argument that Smith deserved to lead this list. After redshirting in 2009, Smith simply led the Cardinals with 88 tackles, including six tackles for loss and in doing so earned the Big East's Defensive "Rookie of the Year." While Smith's tackle numbers slipped slightly (84 tackles) in 2011, he developed into much more of a reliable defender in coverage, seeing his number of passes broken up jump from one in 2010 to nine last season. He also notched his second career interception and continued the reliable, physical tackling that has already helped him notch four forced fumbles over his career, resulting in his earning First Team All Big East accolades in 2011. Smith looks stouter on tape than his listed size and appears capable of following the lead of former Louisville standouts Kerry Rhodes and William Gay as productive NFL defensive backs.

Peyton Siva was the main draw yesterday for the kids at Camp Rondo: 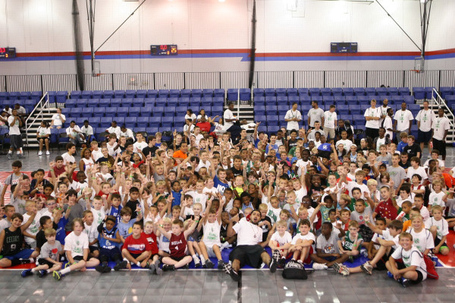 Eric Crawford takes a look at what the new college football playoff means for Louisville, which is basically that the Cards have a slightly better shot at a national championship but still need to be really good in the regular season.

Josh Bellamy appears to have a solid shot of making the Kansas City Chiefs' roster.

"The Bellamy kid has some quickness, some size," head coach Romeo Crennel said as the team concluded its offseason program. "He's a little inconsistent, and we still have to work with him. We'll have to see how he progresses."

Thus far, Bellamy has been able to differentiate himself from the horde of young receivers competing for one of the final roster spots at the position. He's shown promising athletic ability that has Crennel intrigued heading into training camp.

For an undrafted player, that's about as much as you can ask following a month of non-padded practices.

"It's been good, just the transition from college to the NFL," Bellamy said. "I love it. I was expecting it to be very fast, and it's much faster than college, but I don't feel like it's been too fast for me."

It's hot as f--k outside and it's making me fussy. I haven't responded to a request favorably in over 24 hours. Backhanded a worker at Kroger when he told me they didn't have Choco Tacos. I'd like it to get cooler. '

Jordan Mickey has emerged as one of Louisville's top targets in the class of 2013, and Adam Zagoria reports that the affection is mutual.

At this stage, James said Louisville and Ohio State would "probably" get officials based on their recent experiences there.

James and Jordan were especially impressed with Louisville coach Rick Pitino on the visit.

"Louisville was great," James said. "Coach Pitino is a phenomenal coach. Throughout most of our visit, he's so hands on.

"Coach Pitino and [SMU coach] Larry Brown are phenomenal coaches and what impressed us about both of these guys is their energy level. They go and go and go. Their passion for basketball has not changed."

I admire the moxie of these average citizens, but this is not the most effective way to put out these fires. 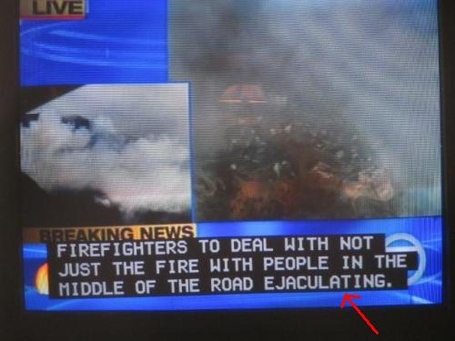 Frank Martin has challenged John Calipari to a troll off (I regretted not going with "troll down" almost instantly...f---ing heat).

I've been writing some mid-major conference previews to kickoff coverage for next basketball season, and to my surprise, the emails I've gotten from upset fans from the Valley, Horizon League, etc. have been on par with the worst from Kentucky fans in terms of vitriol (the grammar's better). If you don't think Western Michigan's going to finish better than third in the MAC's West Division, Bronco Nation WILL make sure you hear all about it.

Anyway, if you have the slightest interest in WCC basketball (the one with Gonzaga), here's my summer preview from yesterday.

Phil Steele revealed yesterday that he believes Kentucky will have the lowest scoring offense in all of Division-I this season.

The biggest piece of evidence in the ever-infamous "Lebron would have gone to Louisville" debate: 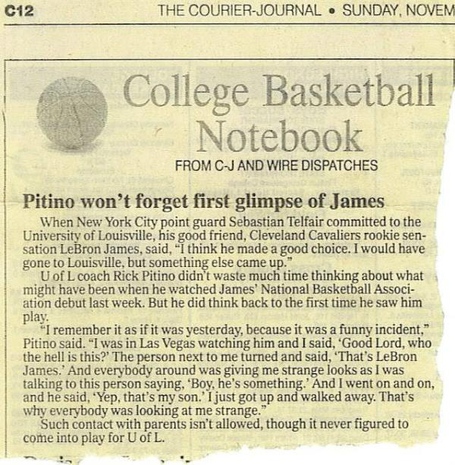 U of L swimming had a remarkable 19 athletes qualify for the Olympic Team Trials this past week.

Kyle Kuric is realistic about his chances of hearing his name called during tomorrow's NBA Draft. He also says that if he doesn't get drafted, he plans to head overseas and play in Europe.

Given a choice, he said he'd choose Europe over the NBA Development League because the money is better and the opportunities to move up from the D-League are limited.

"The money is a lot better in Europe and its just kind of a better route.

"I want to play for at least a couple of years, so I'll see how it goes in Europe if I have to. I'll just see how everything works out, how I like it and if I want to keep playing after that."

And finally, I'm back on the radio with Mark Ennis tonight from 8-10. Listen live on ESPN 680 or anytime on ESPNLouisville.com. Odds of me coming extremely close to swearing on air are always sky high.