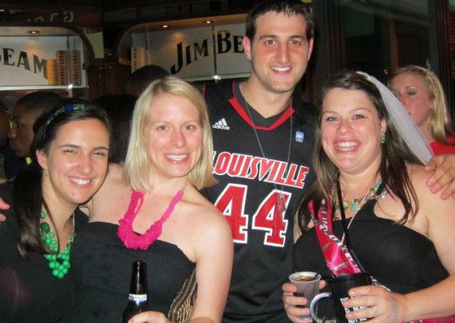 A very happy wedding weekend to Ms. Leigh, who - and I think I'm getting this right - will be tying the knot with Mike Marra tomorrow evening. A local coach called Marra's proposal the best he'd ever seen from a Louisville small forward/shooting guard.

Major congratulations to Peyton Siva, who has been named the recipient of the 2011-12 Big East Scholar-Athlete Sports Excellence Award for men's basketball.

University of Louisville guard Peyton Siva has been named the recipient of the 2011-12 BIG EAST Conference Scholar-Athlete Sports Excellence Award for men's basketball, an honor presented to an individual in each of the league's 24 sports which recognizes academic and athletic achievement as well as community service.

The Scholar-Athlete Sport Excellence Awards are given to one student-athlete in each BIG EAST sport based on academic credentials, athletic accolades or performances and volunteer service to the community. Student-athletes who attained junior academic standing and a minimum cumulative grade-point average of 3.00 are eligible. The winners are chosen by the BIG EAST Faculty Athletics Representative Council.

Siva is one of seven UofL student-athletes to earn the recognition, the most from any single institution in the league. Cardinals who also attained the honor for their respective sport are Brendon Andrews, men's swimming and diving; Austin Berry, men's soccer; Victoria Collins, softball; Chinwe Okoro, women's track and field; Katie Oliverio, women's lacrosse; and Hayley Turner, field hockey.

That kid has a future.

Louisville and Florida International have announced that so long as both Pitinos remain the head coaches at their respective schools, the two teams will play one another for the next three seasons. FIU will play at Louisville this season and next season, while the Cards will travel down to Miami at some point during the 2014-15 campaign.

The Cards and Panthers are scheduled to play at the Yum Center on Dec. 19 this season.

U of L has announced the stops for the 2012 Cardinal Caravan tour, and they are:

@TaylorJustin32: UK BEATS LOUISVILLE 35-0 #WEAREUK THIS WILL BE THE SCORE SEPTEMBER 2.

He later deleted the tweet, but did have this to say:

i work to better my team. and i will and we must better each other so come september 2 we will shock the state of kentucky. LETS GET IT #UK

We're still not even through June, but Mario Benavides and Will Sein have both seen enough.

I better not see any of my teammates saying anything on here..that's not how we roll.

Let our play on the FIELD be our talk. Enough of the side games. Focus on US not THEM. #L1C4

Lost Lettermen says Louisville has the No. 2 returning defense in the Big East.

Everything about Charlie Strong has been good for the Cardinals - not the least of which is the development of a strong, hard-hitting defense. L'Ville was 17th in the nation in scoring defense and figures to be just as strong in 2012, when it is expected to compete for a Big East championship.

Strong safety Hakeem Smith (pictured) leads a secondary with huge expectations. The only downside for this defense? Living up to the bar set by preseason prognostications.

Rutgers checks in at No. 1.

If you haven't checked out Gorgui-onesie baby lying on giant Will Stein banner...well, you really should.

1. Teddy Bridgewater, QB, Louisville (SO)The true freshman built his confidence week upon week and now enters his second year as the top Heisman contender in the league. He trailed only Geno Smith in completion percentage last year (64.5%) and posted the Big East’s No. 2 passer efficiency (132.44) mark. Most importantly, he has added bulk and strength to his frame after playing his best ball down the stretch. He posted a career high 274 yards in the bowl loss and chucked five touchdowns in the final two games.

Hakeem Smith also makes the list, checking in at No. 8.

Yahoo's Jeff Eisenberg, who earlier this week wrote about World Wide Wes' influence being "overblown," takes Rick Pitino to task for the transfer of Rakeem Buckles. The same Rakeem Buckles who said earlier today that it was "terrible for people to think that" he was forced out.

Eisenberg also mentions that Chris Smith, Kyle Kuric and Elisha Justice "offered" to go off scholarship before last season, which is, of course, completely inaccurate. Smith came to Louisville as a walk-on and was never on scholarship, while Justice walked on at Louisville and accepted a scholarship for one year after Samardo Samuels' surprising departure. Then there's Kuric, who came to U of L on scholarship, but under an agreement that he would move to walk-on status if his scholarship was needed elsewhere, which is exactly what happened before his senior season.

The only way to wear baby blue: 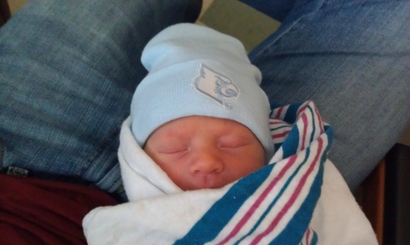 Hat supplier to the stars Twanee with information on how to get one of the specially made infra-red Cardinal caps this weekend:

And finally, if you'd like to hear Rick Pitino's radio interview from this morning in its entirety, you can now do so on the 790 website.