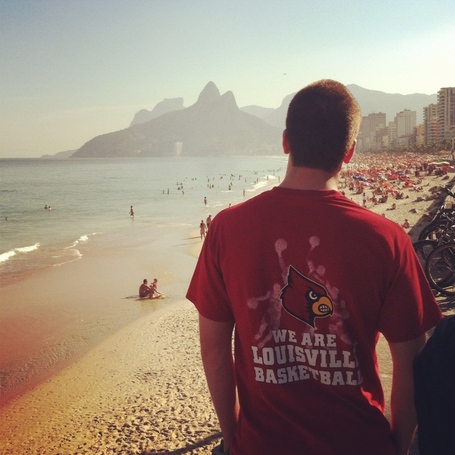 A very cool shot of Louisville basketball being represented in Brazil

Programming note: Mark Ennis and I are back on the air tonight in shortened form from 7-8 to allow room for the NBA Finals. Meaning ONCE AGAIN I'm overshadowed by Lebron James.

You can listen live on ESPN 680 or anytime on ESPNLouisville.com.

Today's news that Rakeem Buckles will be transferring to Florida International set off a firestorm of varying opinions, several of which were difficult for me to understand. Not because I can't read or anything, I just didn't believe they were particularly well thought out.

One of the major talking points - and one which came from several sources other than just Kentucky fans - was that this was yet another instance of Rick Pitino "running off a player." While the argument could have been made after the transfers of Jared Swopshire or Stephan Van Treese, I don't think it can be here.

Everyone I've talked to who knows about this situation has relayed that the decision made was entirely Rock's. The chance to rehab at home, the competition for PT at the four once he returned and his extremely close relationship with Mark Lieberman (who made the move to FIU with Richard Pitino) apparently all played major roles in Buckles' decision.

This really shouldn't even need to be explained, but if Pitino was looking to run Rock off, why wait until the scholarship situation was settled? Louisville is now one scholarship player under the limit of 13, and could be at 11 if Terry Rozier fails to qualify.

Even a mild examination of this situation revelas that it isn't analogous to that of George Goode's or Jared Swopshire's or even Stephan Van Treese's. This decision was Rock's, and I think I speak for all of us when I say I wish him the greatest level of success with Richard at FIU.

The other major(?) news of the day is that Lamar Advertising has had a change of heart and the fan-sponsored "Lexington is for the Birds" billboard will now be going up as originally planned.

You can not like the slogan or think the entire thing is silly, but the reaction here and basically everywhere on the Internet to this story is further evidence that we're in the middle of a special time for the Louisville/Kentucky rivalry.

The contention level between the two programs always starts at the top with basketball and then trickles down. With UK having just won the national title, Louisville potentially heading into next season ranked No. 1, and Calipari and Pitino serving as perhaps the most detested figures ever from each respective side, it's not that surprising that the slightest piece of news right now is sending both fan bases into a tizzy...especially with no actual games taking place.

Personally, I enjoy the rivalry the most when the level of abhorrence is at its peak. It makes for good fun when there aren't games being played, it makes the atmospheres of the games when they do take place that much more intense and the victories for either side that much more gratifying.

If you have hate in your heart, let it out.

Cool news from the world of Cardinal football, where former Louisville and St. X standout Joe Tronzo will be taking over as the radio color analyst during broadcasts of U of L football games this season. Former Cards Stefan LeFors and Tony Stallings had held the position in recent years.

Congratulations to Montrezl Harrell, whose United States U18 national team defeated Brazil on Wednesday to win the gold medal at the FIBA Americas Championships. The team, coached by Billy Donovan, won its five tournament games by an average 38.6 points.

Harrell averaged 5.4 points and 4.2 rebounds for the tournament and tied for the team lead in field goal percentage after hitting 12-of-15 shots. 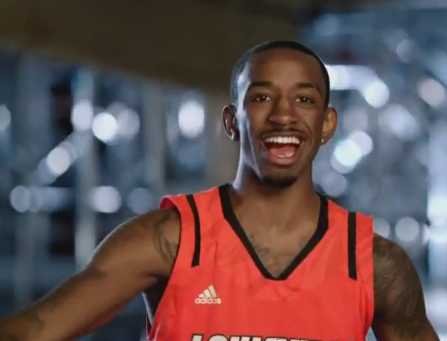 ESPN's Eamonn Brennan has Wayne Blackshear listed as one of his 10 potential breakout players for the 2012-13 season.

Wayne Blackshear, Louisville: Blackshear arrived at Louisville as a highly touted recruit, but was rarely heard from during his freshman season. His first year at school was derailed by injuries, though, as opposed to a lack of playing time. But Blackshear returned in time to make a major impact in the Cardinals' Final Four swing at the inimitable Kentucky Wildcats. UK prevailed, but the Chicago native was excellent in his 14 minutes on the floor. With injuries behind him, playing alongside defender-drawing forward Chane Behanan, the shooting guard will have ample opportunity to show his quality.

Andrea Adelson breaks down what college football's new playoff system will mean for the Big East.

The Big East Coast Bias takes a look at the same issue.

The Big East Must Become The 'Anytime, Anywhere" Conference - If the conference opts to only play eight conference games, then use that freedom to schedule power conference teams however you can. If that means one shot road games, do it. Two for one home and home agreements? Do it. Neutral site games in bigger venues? If possible, do it. The worst thing the Big East as a whole could do is move to NBC for television and isolate itself by never getting shots at the teams that maintain their ESPN/ABC relationship (i.e. everyone else). Non-conference wins of note will be essential for any Big East team to have even the slightest shot at the playoff. Agreeing to whatever it takes to get them will be necessary, but valuable if you win.

Thinking about buying a dog hmmm

I have no idea why I thought this was so funny, but I did. I guess because it was so out-of-place on my timeline.

Louisville commit Anton Gill talks about his game and his future as a Cardinal (video).

Just a reminder that while some members of the media hone their focus in on Pitino, Florida still has 14 players claiming scholarships for next season.

Ssomeone has been hacking the road signs on Brownsboro Rd. this week. 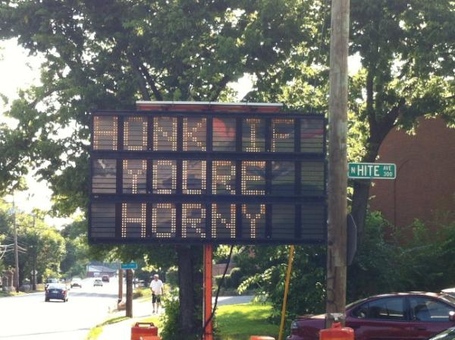 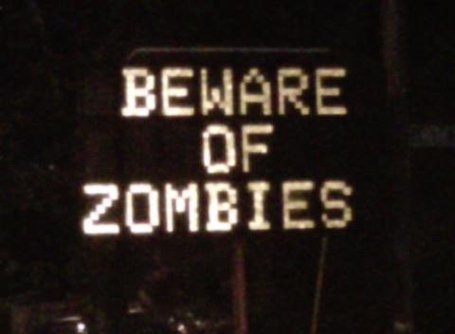 Fingers crossed for a "Bring Chicken to the Bucket" before the weekend.

Lost Lettermen has DeVante Parker as the sixth-best No. 1 receiver in the Big East.

Speaking of Parker, his bravado regarding the Sept. 2 game against Kentucky was backed up by fellow sophomore wide receiver Eli Rogers on Wednesday.

September 2 we win by 21!! We will never lose to those p*ssy CATS again! #word

Rogers also made headlines by being named one of the Big East's rising stars by the conference. Teddy Bridgewater also made the list.

Congratulations to U of L swimmers Carlos Almeida and Pedro Oliveira, who were officially notified by Portugal's Swimming and Diving Federation that they were named to the 2012 London Olympic Games roster for their native country on Wednesday. They join Brazil's Joao De Lucca as Cardinal swimmers who are heading to London.

This has been making its rounds on the Internet pretty rapidly, but I dig it so I'm linking it here, too: 21 pictures that will restore your faith in humanity.

U of L has launched a Pinterest competition to keep things interesting this summer. I don't really understand Pinterest (outside of the fact that the ideas for the last 50 baked goods I've eaten have apparently come from there), so I'll let them try and explain what's going on.

Eligibility
The contest is open to any Pinterest user, including all prospective, current and former students, faculty, staff, and Cardinal fans. There is no entry fee.

Submitting your entry
1. Follow University of Louisville Athletic Department on Pinterest at http://www.pinterest.com/uoflsports.
2. Create a Cardinal-themed board with a minimum of 10 Louisville-related pins.
3. When finished, send your name, phone number, and link to the completed board to ulmark@louisville.edu.

The first LCPT quarterfinal is underway, and Karl Hess and Joe Manchin are currently in a dead heat.

And finally, ESPN's Andy Katz gives us some good stuff after sitting down with Rick Pitino.

AK: What kind of impact will incoming freshman power forward and former Virginia Tech signee Montrezl Harrell have on the first day of practice in the fall?

RP: He won't take a backseat to Gorgui or Chane at the 5 or the 4. He's a killer competitor. That's going to keep both of those guys on their toes every single day. I haven't had a player signed this late that will have this kind of impact.

You know Bloggin' Rick is saving all the really good nuggets for himself. Just like Yeezy with beats.