Watching a little bit of the first U of L/UK game earlier today got me thinking about Russ Smith's 30-point performance and just how rare those individual scoring outbursts have been in the Rick Pitino era.

The only other extreme individual performances that stand out over the past 11 seasons are Reece Gaines' 37 points in a loss to SLU during Pitino's first season, Samardo Samuels going off in the double OT win over Notre Dame a few years ago, Larry O'Bannon setting the U of L record for points in a first half with 26 on Senior Night in '05 against Charlotte, and then - perhaps most obscurely - Brandon Jenkins dropping 31 on UC-Davis in '06.

I'm probably missing a 30-point performance or two, but those are the five that come to mind immediately.

Anyway, here's a look at the top single game scoring performances in the history of Cardinal basketball: 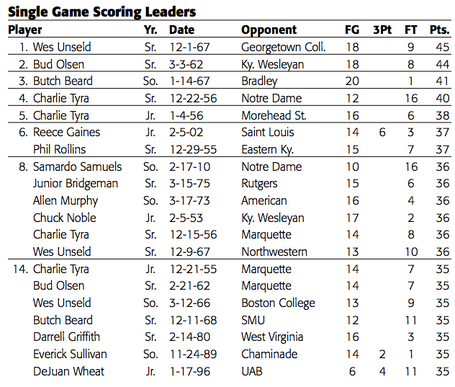 Very interesting to see so few performances from the three-point era.

Russ is comin' for you, Westley.