Share All sharing options for: Athlon Tabs Louisville As Big East Champion In 2012

Athlon, which had previously revealed that it has Louisville ranked 23rd in its preseason top 25, is now going on record with a prediction that the Cardinals will win the Big East in 2012. 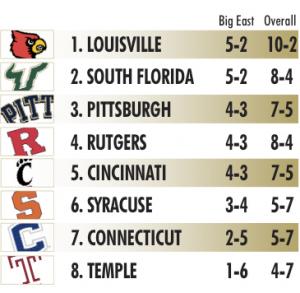 The publication, which picked U of L to finish dead last in the Big East before last season, says the return of a now-experienced Teddy Bridgewater is the biggest thing the Cardinals have going for them.

Louisville got off to a slow start last season, but Charlie Strong's team finished with a share of the Big East title. Much of the core returns intact, and big things are expected from quarterback Teddy Bridgewater. The sophomore should be more comfortable in his second year as the starter and will be throwing to a talented group of receivers. The Cardinals need to improve their rushing attack, and there's no shortage of options with Jeremy Wright, Dominique Brown and Senorise Perry returning. The defense returns six starters from a unit that ranked 17th nationally in points allowed last year.

Athlon first stole my heart in '04 when they picked Louisville basketball No. 1 heading into that Final Four season, and now they're reeling me back in again.

Just when I thought our chance had passed, you went and saved the best for last.