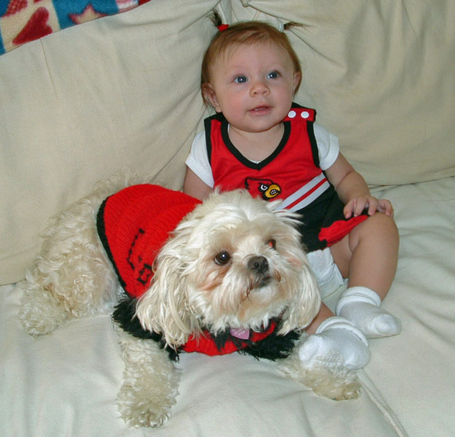 Emily and Bailey Phillips take us into the weekend by both displaying their Cardinal pride and making us wonder what's so fascinating just to the right of the photographer. My guess is Mario Benavides.

It's only June 15 and already the buildup to the Louisville/Kentucky football game is more intense than it has been in several years.

Sept. 2nd, the game shouldn't even be close.

UK Wide Receiver La'Rod King on UofL: "There's no other word I can say but hate... I absolutely hate them."

I think the reasons we're seeing this happen are fairly straightforward.

First, the game is the season-opener, which means we're not inundated with "our complete focus is on Morehead State" like we are every other year. Second, this is the first year where the game has been the season-opener since Twitter became social media king. Third, one side is getting some solid preseason love. The disdain is always going to be there, but when one side is seen as superior and the other feels disrespected, things get ratcheted up a notch.

I'm way too into this already. Can't stop peeing on UK stuff. Have been arrested twice since I started this post.

Keeping with the rivalry theme, it came to light on Thursday that UK has an entire "Beat Louisville" wall inside its training facility: 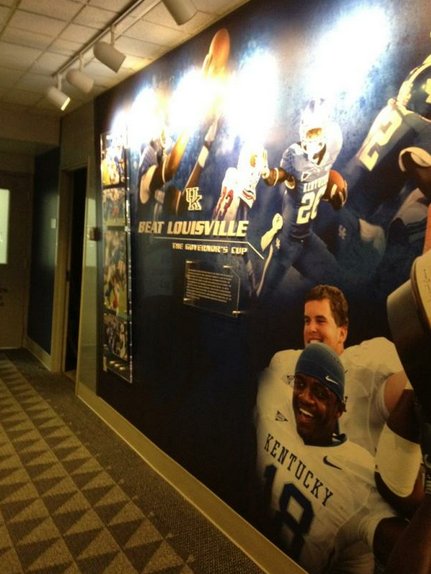 Andrea Adelson with a nice piece about Louisville being on the verge of getting back to where they were under Bobby Petrino.

It is quite amazing what the right head coach can do for a program.

Take a look at Louisville.

In three years, Charlie Strong has got the Cardinals ready to soar into the national spotlight again. With a share of a Big East championship already under its belt, Louisville is expected to be the preseason choice to win the league -- with the potential to be ranked in the Top 25 when the season begins.

The turnaround is rather remarkable, when you consider the Steve Kragthorpe era took a BCS-winning program down to the basement of the Big East.

More good news on the football schedule front, as it was announced yesterday that U of L's Sept. 29 game at Southern Miss will kickoff at 8 p.m. and be televised on CBS Sports Network.

The likelihood of me ruining my little sister's wedding should Louisville stumble in Hattiesburg: off-the-charts.

As of midnight last night (again, I don't believe days start until 5 a.m.) college basketball coaches were allowed to send text messages to recruits. Louisville got to work fast, as five-star center Jahlil Okafor (2014) claimed Rick Pitino was the first coach he heard from a 12:01, while fellow five-star center Chris Walker (2013) reported his first message came from Kevin Keatts.

Coaches have to be very careful about what they say in these text messages, because the potential for them to read like late-night booty calls (do people still use "booty call"?) is pretty high.

I wuz really impressed by how u used ur left hand this afternoon. ;)

i like the way u get after it. we could sure use more of that here lol

Those were all actual text messages sent by Scott Drew.

This batch of the best GIFs of the week is especially entertaining.

Via Rocco Gasparro, here's how the U of L football team spent its morning workout: 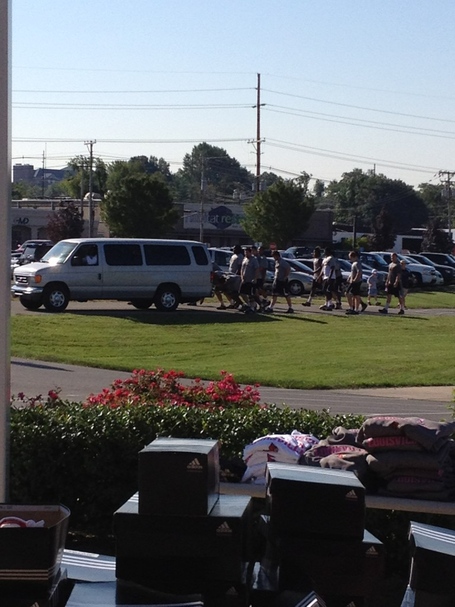 That's me driving. I'll admit to being a little startled at first, but then I just went with it.

The 10 worst book covers of all-time.

Four-star wide receiver Isaiah Jones out of Milton, Fla. announced earlier this week that Auburn is his leader and that Florida State and Louisville comprise the rest of his top three.

Oh, but I do miss hearing "Thomas chose Louisville over Samford, Eastern Kentucky and a baseball scholarship to Bellarmine."

After responding "yes" to a question on Twitter about whether or not he was "good to go," rumors began to swirl that Terry Rozier had been declared eligible for next season. Apparently that is not the case, as Rozier still has significant work to do this summer in order to be cleared by the start of the fall semester.

The Brampton Guardian really should have looked into The Bumble's backstory before running this. 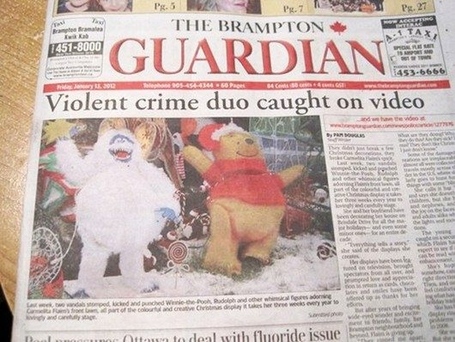 Just another case of lazy journalism.

Clint Hurtt says he and the rest of Charlie Strong's coaching staff love Louisville and have no desire to be anywhere else.

"We are genuine when we say we want to build something here," Hurtt said. "My family loves it here, I love it here and I know Coach Strong feels the same way. We believe in Coach Strong as our leader. We know how he feels and we want to be a part of this program and this city."

"As much as Coach Strong is doing to try to change the culture of this program and this city, obviously this is a man that is not trying to go somewhere else," Hurtt said. "We absolutely love it here, we love our fans and we love our community. People need to stop worrying about if we are going some other place. We are not going to run out on these kids.

"We love this place, and we want everyone else to feel the same way that we do. We are very passionate about Louisville."

Everything about the football program right now is my favorite.

Six tickets to the 2011-12 Least Cool Person Tournament quarterfinals have been punched. Your round one winners thus far: John Calipari, Joe Manchin, Karl Hess, The Courier-Journal, Matt Jones and 3-Goggles.

The final two first round matchups will be unveiled Monday.

There's been a lot of talk about billboards this week, but here's the actual summer installment from U of L (via Howie Lindsey): 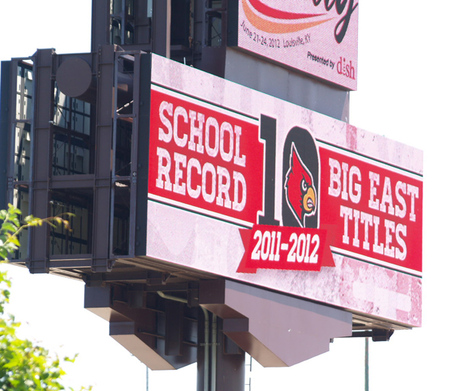 I would have gone with a solid red background and then just "RUSS" in all black capital letters, but that's just me.

Project note: If I sell 50,000 paper mache Gorguis then I'm going to throw a DePaul Day parade in downtown Chicago the day/night before the game. The grand marshall of the inaugural parade will be Quentin Bailey. There will also be an animatronic Kyle Kuric dunking on Scott Martin float.

Other details are currently being etched out.

A day after declaring that U of L's billboard effort proved that "UL fans will copy anything UK does," KSR unveiled a group of mock Louisville billboards.

An update on how former Cardinal baseballers are doing in the pros.

The Louisville softball team finished the season ranked 17th and 18th in the sport's two major polls. Congrats again to the ladies on the most successful season in program history.

And finally, ESPN says Louisville has the top football facilitates in the Big East.

1. Louisville. The Cardinals already have some pretty nice facilities, with a relatively new football stadium right on campus. Coming next is an $8 million project that will upgrade and expand the weight room, training room, locker room and include a new academic center in the football complex.

The worst football facilities in the Big East? You guessed it, DePaul.