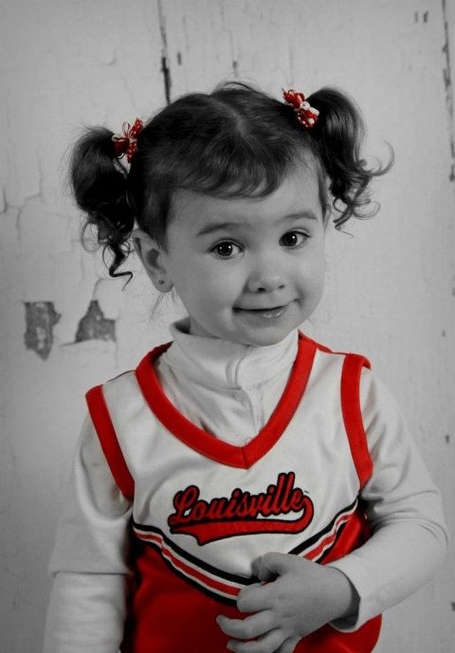 Kaylee Tomlinson's uncle claims her first words were, "why hasn't Mike posted anything yet today?" I believe him. I trust too much. I don't think it's an issue. You know who else trusted too much? Joe Montana.

If you couldn't already tell, this is going to be a great post.

Louisville's Sept. 8 home game against Missouri State will kickoff at 3:30 and be televised by WHAS. So that's now three 3:30 home starts to go with the nationally televised night kickoffs against Rutgers and Florida International. So far, so good on the 2012 scheduling/tailgate front.

U of L offensive coordinator Shawn Watson spoke at the Quarterback Club luncheon at Wildwood Country Club on Tuesday, and had high praise for his starting signal caller.

"The guy who makes us go is Teddy Bridgewater. He's unique. I've been coaching this position for about 20 years now, and I've had some really good kids. Teddy is the best I've been around, and it's easy to say because you saw the type of year he had.

"What's unique about Teddy is that his character is his greatest attribute. He's a good passer and a good athlete, and he has all those things he does really well, but his character is what makes him the player he is. I've never been around a kid who studies the game like he does. He's the kind of kid who internalizes teaching, which means you tell him one time and he takes it personally and fixes it. You never see the same mistake twice on film. He does whatever it takes. If he's having a hard time or struggling with something, he's willing to put the extra time in to make it right."

He also drummed up some compliments for everyone's favorite backup QB.

"Will Stein is Teddy's X-factor, and I've referred to that several times," Watson stated. "Teddy will tell you the same thing; I was really proud of Teddy after the spring game because he said that to the media. He said his drive and push is Will Stein; Will Stein comes to practice every day trying to take Teddy's job and that's what you want as a coach. It gives Teddy a push and keeps motivating him.

"Will is like a second coach to him. He really mentors Teddy and we're blessed to have two quarterbacks that we can win a championship with."

Kentucky at Louisville on Dec. 29 headlines Jeff Goodman's list of the 55 best non-conference games of the 2012-13 season. The Cards' Dec. 15 trip to Memphis checks in at No. 7.

Edgar Sosa was the No. 1 overall pick in Tuesday's LNB - the top professional league in the Dominican Republic - draft. Francisco Garcia, who is still currently a member of the Sacramento Kings, was also taken in the draft.

Sosa wasn't healthy enough to play in the Dominican national team's exhibition game at NKU last night, but he did take some time out to talk with Cardinal fan LeRoy Marshall and his son Zion (pictured) during halftime. 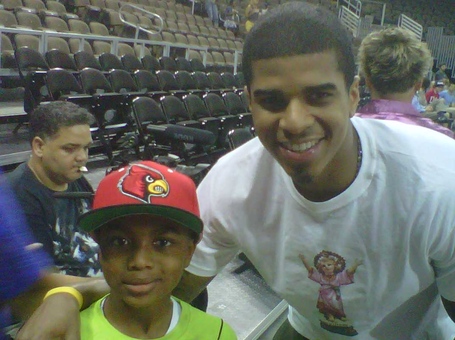 VCU's Shaka Smart on new Cardinal Montrezl Harrell (via Goodman's Twitter): "He really has a high motor. You can't teach what he does."

Eric Crawford with a great piece for WDRB on how Charlie Strong has been able to keep his staff together.

When it comes to other jobs, Strong tells his staff, "They say the grass is always greener, but you'd better look close at your own yard."

So far, Strong's assistants seem content in their yard over on Floyd Street.

"I think the community plays a part," Jean-Mary said. "The city embraced us and it's a great place to live. But the big thing, and I think all of us feel this way, we believe we're sitting on something very special. We've seen the changes the past couple of years. Everybody on this staff believes we have the makings of a championship-caliber program, and not just a one-year wonder."

Certainly, when it comes to hanging on to his coaches, Strong is about anything but one and done.

My man Larry about to bring home a guitar on "The Price is Right" Tuesday. 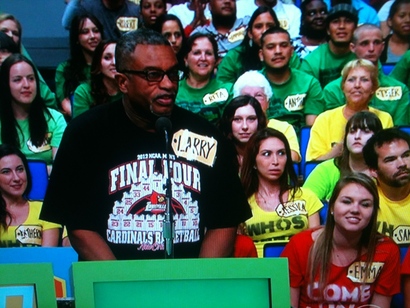 "Jessica had always been terrified of numbers."

Adam Lefkoe has been filling in for Drew Deener as host of the "Early Birds" show this week, and had a pair of solid interviews with Clint Hurtt and Kevin Keatts on Tuesday. You can listen to both - and make fun of the name of his Tumblr - right here.

Taquan Dean has signed a contract to play in Turkey's top-level TBL league. 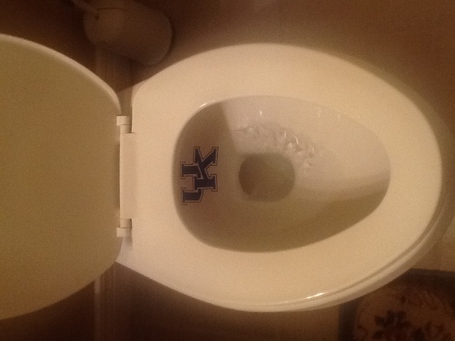 The men's soccer team has released its schedule for the 2012 season. The Cards will get things started on Aug. 26 at Maryland.

The creator of the original Peyton/Russ - Woody/Buzz photoshop is now selling some new, cool Louisville-themed stuff which you should check out. She (Oooo, it's a lady) included "Bourbon" in the title of her business, which should rope a few more of you in.

Stephan Van Treese on the best part of no longer being a member of the Louisville basketball team.

And finally, a reminder that we have three live first round contests in the 2011-12 least cool person tournament. John Calipari and Karl Hess appear headed to the quarterfinals in style, but Mark Nordenberg vs. The Courier-Journal is still too close to call after 1,200 votes and just hours remaining until the poll closes at 4.

The tournament rolls on later today.