The Louisville/Kentucky Summer Billboard Wars Are Back

Share All sharing options for: The Louisville/Kentucky Summer Billboard Wars Are Back

As sacred as the first Saturday in May, the U of L/UK basketball game or The Turtle Man, the Commonwealth's tradition of Cardinal and Wildcat billboard battles taking place during the summer months appears to be back for another year.

Check out what just popped over the U of L buildings on Arthur St. by Cardinal Park (via Howie Lindsey): 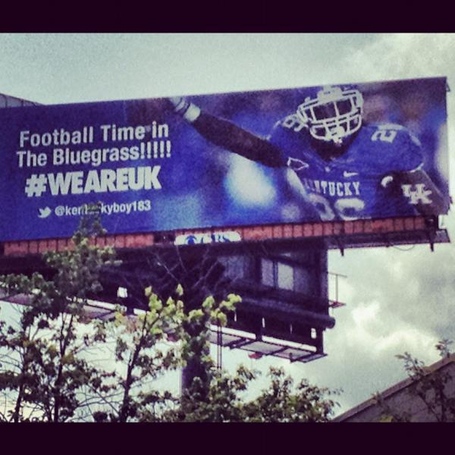 I would have enjoyed(?) seeing Charlie Strong's face the first time he laid eyes on that. Then I would have f---ing run, man.

Though Louisville hasn't officially answered yet (aside from the "We're Miles Ahead" staple remaining in tact), the folks at Big Time Yurts have put together a plan for a "Lexington is for the Birds" billboard to go up on I-64 just outside of Lexghanistan.

In order to fund the billboard, they're asking folks to visit their site and purchase a "Lexington is for the Birds" bumper sticker. All proceeds will go to the cause.

The summers when the game is played in Louisville are the best summers.