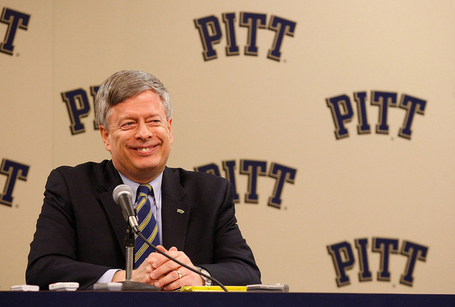 --Pittsburgh chancellor who many credit for being the catalyst behind the moves of Pitt and Syracuse to the ACC in Sept., the same moves which set off a huge chain of drama in the conference realignment world.

--Was largely behind the vetoing of a reported $1.3 billion television deal between the Big East and ESPN which would have benefitted the conference greatly going forward. Spoke out against the deal after under-the-table deal with ACC had been struck.

--Is perhaps the king of Big East hypocrisy.

--Made U of L's Sept. 17 win over Kentucky (the same day the Pitt/'Cuse news broke) just slightly less enjoyable.

--Drew the ire of both Charlie Strong and Rick Pitino at various points in the season.

--Adopted a pay format for portions of its online content.

--Frustrated Louisville fans with its coverage of Cardinal sports, most recently with its "Pitino Tells Van Treese to Leave" headline for a story about basketball player Stephan Van Treese's transfer.

The entity with the most votes will receive a pass into the quarterfinals. Polls close Wednesday afternoon at 4 p.m.