Share All sharing options for: Trinity Quarterback Gets Scholarship Offer From Louisville

Interesting news from the world of football recruiting today, as Louisville has extended a scholarship offer to class of 2014 quarterback Reggie Bonnafon from Trinity. It's interesting because Bonnafon has not taken a meaningful snap in a varsity game, and will again sit behind senior and returning starter Travis Wright next season.

Since his freshman year, Bonnafon has been a pretty hot name locally. He's justified that talk in the past month by shining at both the Ohio Nike Camp and the Elite 11 regional. Those performances have led to increasingly heavy pursuit from both Tennessee and Arkansas, and now this scholarship offer from U of L. 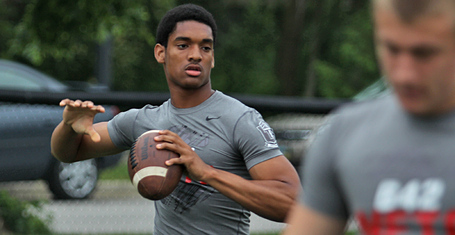 Though Wright will remain the starter behind center for the Shamrocks this season, Bonnafon will also be getting a chance to shine on the field. He's slated to start at wide receiver and also take snaps at QB in certain situations.

Louisville has also already offered a scholarship to Drew Barker, another Kentucky (Conner) quarterback in the class of 2014.