It'll Be Pitino Vs. Pitino On December 19

Share All sharing options for: It'll Be Pitino Vs. Pitino On December 19

Rick Pitino has squared off against members of his coaching family tree many times in the past, but never his actual family tree.

That will change next year when the elder Pitino's Louisville squad will play host to son Richard and Florida International at the KFC Yum! Center on Dec. 19. 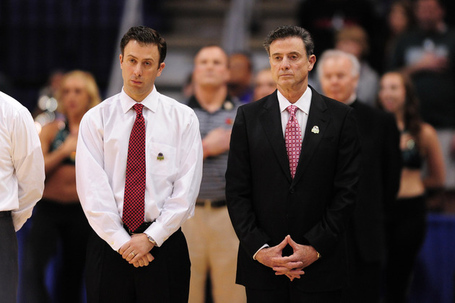 "I never got to spank you as a child, would you like to get a spanking this year?" Rick Pitino texted his son not long after Richard got the FIU job last month.

"He uses that line all the time on the golf course," the younger Pitino responded. "He needs some new material. I'm going to ask him, ‘When's your new album coming out?' "

Richard Pitino and FIU agreed to a six-year deal in early May to make him Isiah Thomas' replacement. The Panthers went just 8-21 last season and finished in last place in the Sun Belt's East Division.

At least he won't stare into space like a goon if his old man rolls him.