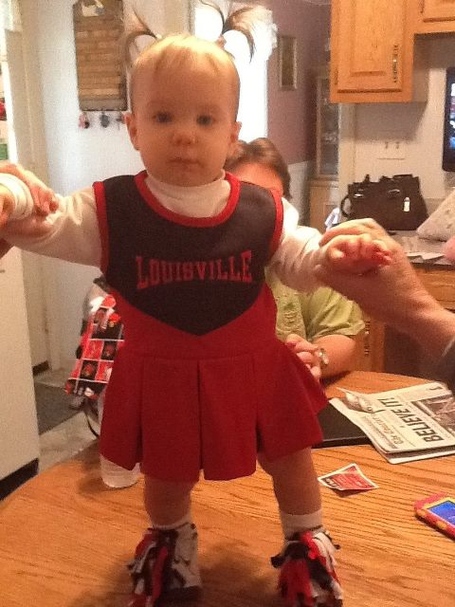 Samantha Rice two-stepping us into yet another glorious dead period weekend. Loving the C-J in the background. In my mind this was taken around 8 p.m. last night as she's still trying to process it all.

A huge weekend for Louisville baseball gets started tonight as the Cards begin their quest for the third regional championship in program history. Third-seeded U of L will be taking on No. 2 New Mexico State at 7 p.m. in a game that can be seen on ESPNU.

I'll fully admit to being a less-than-stellar Cardinal baseball fan. I don't really start checking the team out until after basketball's over, and even then it usually takes the first Kentucky game before they truly have my full attention. That said, since Dan McDonnell's been here I've been amazed by how excited I've found myself about the team by the time the Big East Tournament rolls around each year.

Even if you're not the biggest baseball fan or haven't followed the team that closely, tonight you get to watch Louisville play in the NCAA Tournament for one of our country's three major sports.

If you're sill looking to be persuaded, I'll offer you this.

College Baseball Daily sees Louisville as the first team eliminated from the regional, while Sports Illustrated likes the Cards to win one game. I have yet to see anyone taking U of L to move on to the Supers.

A piece of advice I've learned myself this week: never get sick. It's just not worth it. Do something, anything, else.

ESPN takes a look at Montrezl Harrell, who is currently in Louisville for a visit that I'd expect will go quite well.

"I've always felt like I was underrated," said Harrell, a 6-foot-8 forward who recently finished his senior year at Hargrave Military Academy (Chatham, Va.). "So it feels good to be getting all of this attention now even if it's because of things I had no control over. I'm starting all over with my recruitment, and this is a different level, but I like it."

Harrell, who is ranked No. 89 in the class of 2012 ESPN 100, originally committed to Virginia Tech last March, and was the prize of the Hokies' 2012 haul -- a relentless workhorse who earned a reputation for his versatility and power dunks.

In February, Harrell threw down 18 dunks in a 122-119 overtime win over Fishburne Military School (Waynesboro, Va.). He finished with 51 points, 17 rebounds and six blocks.

I'd usually make a joke about my basement nerf basketball prowess here, but I'm not sure I ever had 18 dunks in one daily session, let alone a single game. Did put a giant hole in a wall once. Yet another thing not as cool as recording 18 dunks in a single basketball game.

Rondo really wanted to play for Louisville & Rick Pitino, but Pitino wanted Sebastian Telfair instead. Bad call all around

Just like my life coach Omar Little, I believe a person should have a personal code to help guide their daily actions.

Here are two items from my personal code:

There's no legitimate argument for midnight other than people being able to stay awake and say "hey, merry Christmas" when it really isn't Christmas. The sun's starting to come up or the beginning of the process is right around the corner, the morning news is coming on, there's no chance of any of "yesterday's" activities still taking place; new days start at 5.

2) In Louisville, the seasons can be divided equally into quarters.

I always hated having been out of school for three weeks and having dealt with 90+ degree heat for that same span before hearing the weatherman say "happy first official day of summer" at some point in mid-June. It's the only time I've ever gotten mad at Harned.

Anyway, this has all been an extremely long-winded way of justifying the following proclamation: happy summer.

The code gets deeper...somewhat deeper. I don't promote unprovoked murder. That's in there right after "turning left at red lights after nightfall when you haven't seen another car for seven seconds is Ok, provided your clear field of vision in both directions is at least 75 yards." And then there's the bit about unprovoked murder being bad. Code's not cool with it.

I'll Have Another is about to take his shot at becoming the first triple crown winner in 34 years, but those hopes nearly took a massive hit on Thursday when he narrowly escaped being crashed into by a rider-less horse. 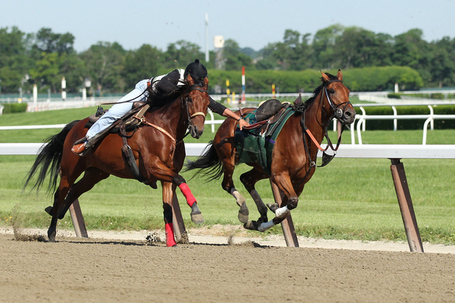 Josh Chichester has signed a contract with the Iowa Barnstormers of the Arena Football League. I can only assume he'll be hanging around the arena to suit up for the Iowa Energy of the NBDL afterward.

Here's a great way for U of L baseball fans to get involved in the expansion project at Jim Patterson Stadium.

A veritable bevy (BEVY!) of interesting quotes from Memphis athletic director R.C. Johnson on the future of the Big East and the possibility that the league may ultimately sign TV deals with both ESPN and NBC.

"(NBC's) purpose (at the meeting) was to show they had an interest in the Big East and they had it tied in with Notre Dame football," Johnson said. "They talked about doubleheaders and tripleheaders on the NBC station. Not on the Versus or whatever they all have, NBC (Sports Network), because they've got several cable outlets.

Johnson said they'd love to find a way for coverage to continue on ESPN even if the bulk of their content moves to NBC.

"I think in the ideal world and financially as well, if we could get a combination of ESPN and NBC, it would just be magnificent," Johnson said. "ESPN is talking about continuing 'Thursday Night Football' which is a big draw and continuing 'Big Monday' in basketball which is huge."

Brandon Golson, who signed with South Carolina, failed to qualify, enrolled at Louisville and then had to be dropped from the program because he ruled to be a partial qualifier (the Big East isn't cool with those), is now headed back to South Carolina. Best of luck to Brandon as a Gamecock.

For the first time in 30 years, there will be no Kentucky HoopFest in Louisville this summer.

Today's excuse to throw an individual parade where you're the Grand Marshall... 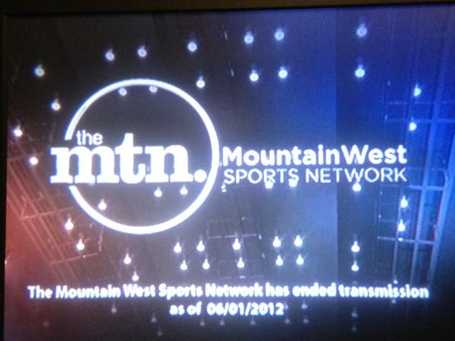 You used to be so young and brash...now look at yourself. LOOK AT ME...I did this to you.

Congrats to Cardinal ace Justin Amlung on being named a third team All-American by Collegiate Baseball. It's the 13th time a Cardinal has earned an AA nod over the course of Dan McDonnell's six seasons in the Derby City.

Myron Medcalf still wants to see Louisville and Indiana square off on the hardwood next season.

Louisville at Indiana: Tom Crean could use another border rival right now, and Louisville might be the best team in Kentucky next season. Gorgui Dieng is one of the best shot-blockers in America, and Peyton Siva and Wayne Blackshear return, too. It wouldn't have the same national spotlight as Kentucky-IU, but from a competitive standpoint, the matchup could surpass it. These are two of the toughest teams in America going into next season. If UK and Indiana can't figure things out, let's get Louisville involved. UL and IU have reportedly had discussions about a future series. No need to wait.

Per his Twitter account, Edgar Sosa worked out for the New York Knicks on Thursday. More than a little remarkable considering the gruesome injury he suffered just nine months ago.

He's actually really nice once you can get into a conversation: 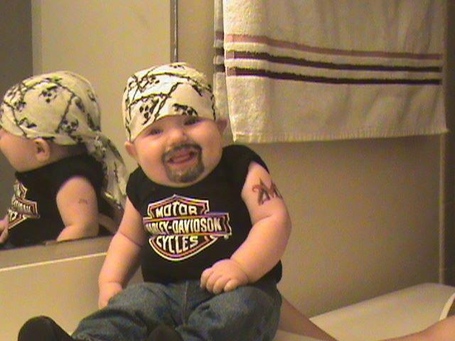 Dick Vitale says Wayne Blackshear is one of six sophomores ready to take a step forward next season.

CBS' Matt Norlander guesses that Peyton Siva and Wayne Blackshear will make up 2/5 of the All-Big East team at next season's end.

And finally, UNLV basketball coach Dave Rice says the Runnin' Rebels will resume their series with Louisville, likely beginning in 2013. Good. It was getting to be a nice little Thanksgiving weekend tradition there for a while.