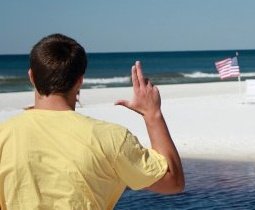 Beautiful. You are truly an artist, John Allen.

The cat is out of the bag so I will go ahead and say it. I will be a guard at the university of louisville next season #L1C4 #CardNation

Huge news in the world of the U of L women's basketball team, where starters Monique Reid and Tia Gibbs have each been granted a medical hardship waiver and will be eligible to play next season.

The Cards are officially contenders.

It's Senior Night for the Louisville baseball team, which will host Morehead State at Jim Patterson Stadium this evening. First pitch is scheduled for 6 p.m., but there will be a ceremony for the seniors held prior to that.

It's almost a guarantee that the Cards will not host a regional or, potentially, a super regional, so this is more than likely your last chance to catch the boys at home this season.

I'll fully admit that the vast majority of the financial details pertaining to athletic programs across the country that were released by USA Today on Monday goes way over my head. Thankfully, Eric Crawford is here to make sense of the whole thing.

Most notable in Crawford's blog post (at least for people like me...who are dumb) is the following chart comparing the numbers for U of L and UK: 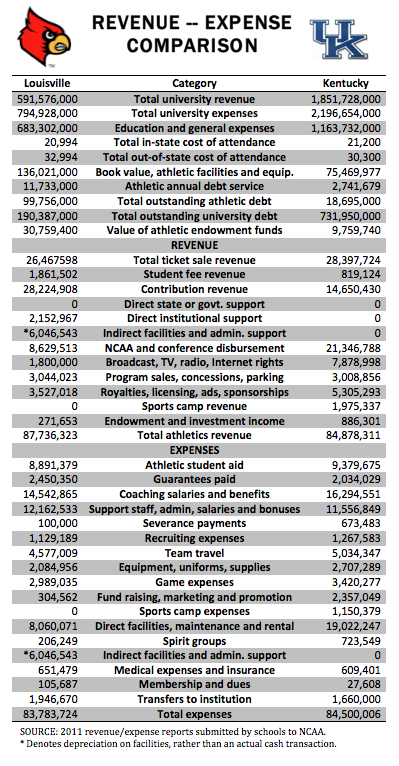 If this still hasn't left you sated, then check out Eric's Twitter timeline from last night for even more information and interpretation.

Did you know John Calipari makes more than the entire athletic budget of five Division-I programs? Did you know I have a band-aid on my left ring finger right now? I just knocked two things out of your brain to make space for those pair of bad boys.

Peyton Siva will be one of the guests tonight on Inside College Basketball with Jeff Goodman on SiriusXM Channel 91. The show runs from 7-10 p.m., but no word what time Peyton will be on. 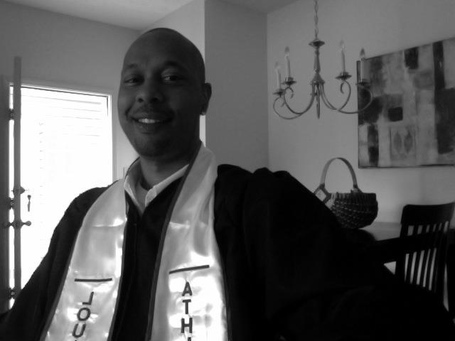 The Sporting News continues its positional rankings of the best returning players in college basketball, and has Chane Behanan as the No. 9 power forward...three spots behind Kyle Wiltjer.

The question with Behanan remains not his talent, which would appear to be unquestioned after he reached double-figure scoring in five consecutive NCAA Tournament games, or his effort for the same reason.

The only issue now is whether a true power player can be a star for coach Rick Pitino - without having the sort of long-range skills Jamal Mashburn and Antoine Walker demonstrated for him at Kentucky. Behanan does his deal along the baseline, and he was huge in the Cardinals' Final Four run. If he sees the ball enough, he could be a tip-to-buzzer star.

Mike Moser at 10 is also seems borderline insane, but whatever, it's May and at least we're being given something to talk about...but yeah, that's wrong.

On the center front, Mike DeCourcy has The Gorgster at No. 3.

Dieng is a case study in the value of NCAA basketball. At a time when pro franchises have fallen so in love with the sounds of their own voices as to ignore the obvious evidence they do a terrible job of training players, Dieng walked into Louisville essentially unskilled. He was 205 pounds in high school, ranked as a 4-star prospect because of his height and shot-blocking.

He shot just 53.8 percent from the foul line as a freshman and scored in double-figures only three times. Now look at him. As a sophomore, his foul shooting improved to 67.6 percent. He became a factor on offense with a 9.1 scoring average. And his defensive command along the baseline helped lead the Cardinals to the Final Four. This kind of rapid progress rarely happens in any other basketball venue, but hardly anyone bothers to emphasize this.

Jody Demling has a solid pair of recaps (one and two) from last weekend's May Classic AAU event which saw the Louisville Magic fall to the Eric Gordon All-Stars in the championship game.

Indiana and North Carolina may have both been dropped by Kentucky, but the two powerhouse programs will get to square off against one another in the headline game of the 2012 ACC/Big Ten Challenge.

Here's the full slate of matchups for this year's event.

The Michael Porter news is disturbing.

Chris Smith posing with Nolan Smith's mom following his graduation from U of L: 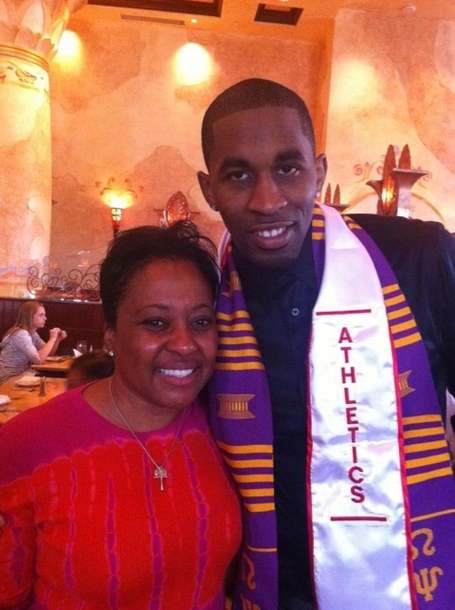 The latest ESPN college baseball bracketology has Louisville as the two seed in a regional hosted by Kentucky.

The College Football Hall of Fame's class of 2012 was inducted today, and that class did not include Howard Schnellenberger solely because his all-time record does not meet their minimum winning percentage requirement.

In a related story, the College Football Hall of Fame is a joke.

Why didn't Scar just kill Simba himself? There was literally no one around besides the hyenas when he was guilt-tripping the prince into running away after Mufasa's death. Pretty sure Ed would have had no objection to that power move.

Luke Winn with a great piece on the different three-point defense philosophies.

Notre Dame's Scott Martin has been granted a medical hardship waiver by the NCAA and is eligible for a sixth season. I can only assume his issue was emotional trauma stemming from an incident in South Bend in February of 2010.

And finally, Yahoo names Gorgui Dieng as the starting center on its "All Junior" team for next season.

They forgot to add... 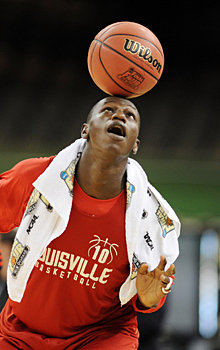 Which is equally important.