Louisville/Kentucky Football Game Moved To Sept. 2, Will Be On ESPN

Share All sharing options for: Louisville/Kentucky Football Game Moved To Sept. 2, Will Be On ESPN

Great news from the world of Cardinal football scheduling, as the annual rivalry game between Louisville and Kentucky has been moved to Sunday, Sept. 2 and will be televised by ESPN. Perhaps the best news of all, though, is that kickoff is scheduled for 3:30 p.m.

When the game has been played in Louisville (aka, when it's the first game of the season), the Battle for the Governor's Cup has consistently drawn an enviable TV slot. In 2008, ESPN wanted to make the game its Monday night feature, but Kentucky declined, citing not having enough time to prepare for Norfolk State the next Saturday as the reason. 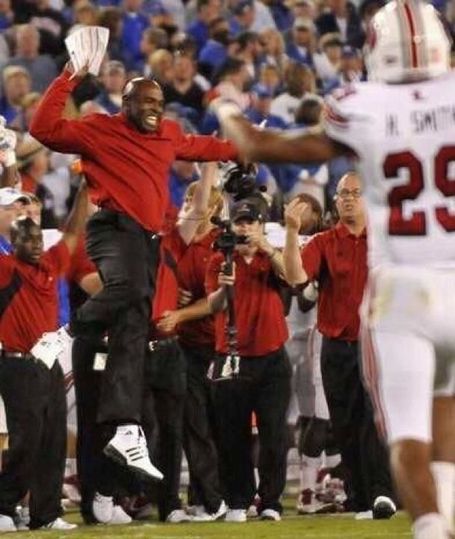 If I could hibernate for seven months...well I wouldn't, because I feel like I'd miss out on a lot of fun stuff over the summer. I'm just saying though, I'm looking forward to this game and it is a long way away.