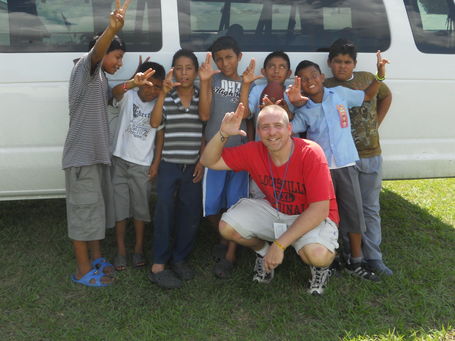 Randy Hughes doing some life-changing work during a medical mission trip in Belize.

The bookends really let him down here.

Luke Hancock did suffer a minor shoulder injury during a pickup game yesterday afternoon. The understanding is that he's fine right now, and that the rapid (but expected) mass overreaction was just that. Howie Lindsey tweeted that Rick Pitino would not be commenting on any minor injuries or other pickup game occurrences during the offseason.

So that, as they say, is that.

The Louisville baseball team begins a crucial three-game series with Connecticut tonight at 6 p.m. inside Jim Patterson Stadium. U of L will also celebrate Legends Weekend during the series.

LOUISVILLE LEGENDS WEEKEND
The series marks a weekend-long event of celebration as Cardinal baseball will honor its more than 100 years of baseball history by recognizing great teams and alumni during "Louisville Legends Weekend." Special recognition will be held for both the 1957 and 2002 Cardinal teams. Celebrating their 55th anniversary, the Cardinal Nine of 1957 was the first team in school history to go undefeated at 15-0. Ten years ago, Louisville earned its first ever NCAA Regional bid, capping a record-breaking season in 2002. Pregame festivities and special offerings, including retro Cardinal gear, will be included throughout the weekend.

SERIES PROMOTIONS
In addition to Legends Weekend, each game includes special promotions for fans. On Friday night, fans can purchase draft beer and small Pepsi products for just $1 each throughout the ballpark for Budweiser Buck Night. For the middle game of the series on Saturday, the fourth set of limited edition Baseball Trading Cards will be released to the first 150 fans. The trading cards, which feature the 2012 Cardinals, will also include an exclusive Louisville Legend card. Finally on Sunday afternoon, Dr. Bizer's Vision World presents Family Fun Day as kids can run the bases and select players will sign autographs on the field after the game.

An equally quick "best of luck" to those folks running in the mini-marathon tomorrow. I'll be playing 18 holes of golf and telling myself that our workouts were comparable.

Louisville became the first program to offer Conner (Ky) rising junior QB Drew Barker a scholarship when it did so on Thursday.

Here are Barker's highlights from his sophomore season:

It's senior weekend for the Cardinal softball team.

The ninth-ranked University of Louisville softball team will return to Ulmer Stadium to celebrate senior weekend with a three-game series against Georgetown April 28-29. The teams will meet in a doubleheader at 2 p.m. Saturday and will wrap up the home season Sunday at 1 p.m.

Seniors Kristin Austin, Tori Collins and Tesha Paysen, have won 171 games - the most of any class in program history. As freshmen, they helped set a school record with 48 wins and as seniors, they are on track to break that record. They have been to three straight NCAA regionals and hosted two, they have also posted two runner-up finishes in the BIG EAST Conference championship.

My long-standing dream of riding a champion colt to victory at the Kentucky Derby didn't truly die for until I was bucked from a pony at the Mother of Good Counsel summer picnic when I was 3-years-old. Why did the pony rear back and throw me off, you ask? Perhaps because my mom, who was explicitly told no flash photography, snapped a flash photo right in the pony's face.

Next thing you know, I'm on the ground, my dreams are crushed, my skull is nearly crushed, and the only thing I remember thinking about is whether or not the pony was going to take a dump on me.

It was just like when Buzz Lightyear thought he could fly...except I never had an appropriately redeeming experience on a horse, pony or similar animal. Did ride an elephant more than once at the zoo, and that was fun. Made my mom write "Jake the Snake" on the picture. I was big into WWF. Never been a front-runner though. 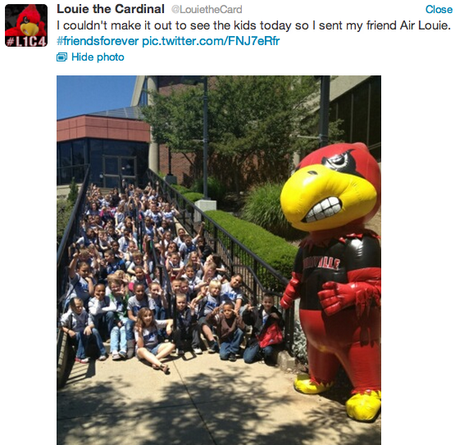 That just became the most cynical class of second graders on the planet.

Not how I wanna go out.

Congratulations to Louisville men's tennis coach Rex Ecarama, who was named Big East Coach of the Year yesterday. Sebastian Stiefelmeyer was named Freshman of the Year, and was joined on the All-Big East team by teammates Andrew Carter and Albert Wagner.

Trinity star Jason Hatcher recently received a phone call from Alabama's Nick Saban. His mother's reaction when he told her the news: she cried...but not because she was so happy, because she really wants him to go to Louisville.

If we keep all three of these guys home, I'm throwing a party. Don't know where, but you're all invited. Also invited: the "she sounds hideous" woman from the State Farm commercial because she makes me smile.

The men's golf team heads into the Big East Championship as one of the favorites to earn the crown.

At least the Florida Panthers GM and President were both able to keep their emotions in check after last night's double overtime loss. 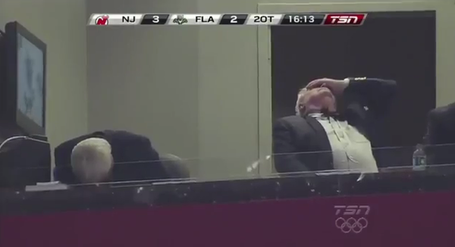 Mint Juleps are gross. Throwing that out there. Take it and do with it whatever you want. 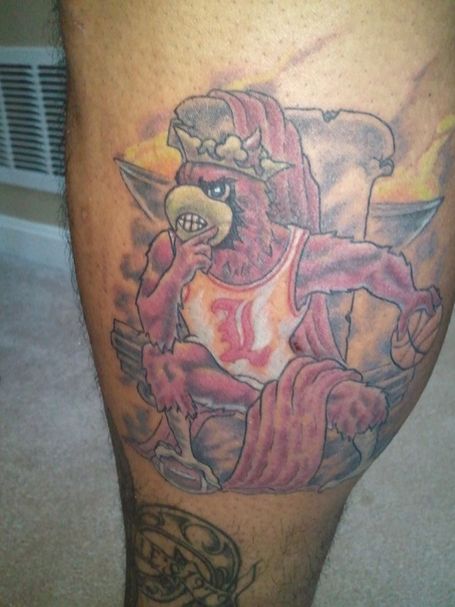 Construction is about to begin on the Kennedy Bridge. No mention, however, of the Gorgui Holding up the Bridge Statue I've spent so much time bribing people (free hug coupons) behind closed doors to make happen.

And finally, the weather is ridiculously amazing, Derby is one week away; do something fun this weekend, folks.